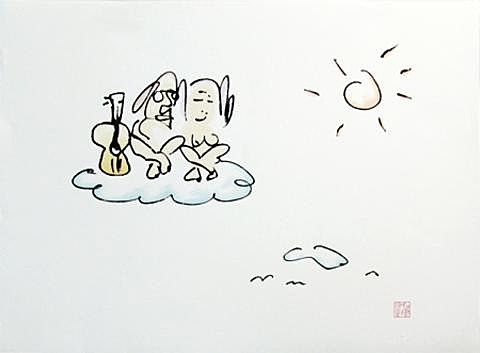 Today is John Lennon's birthday, and so Yoko Ono is giving Lady Gaga an award, in Iceland. John would've been 72. Check out a gallery of the former Beatle's drawings (like the one above) over at the Huffington Post. Yahoo Canada takes a look at some of his letters.

Joe's Pub is celebrating John's birthday tomorrow. Symphony Space honors the man in November. Glasslands gets down in December.

Speaking of Lennons, Martha Wainwright's new album Come Home to Mama, which is also streaming at NPR, was recorded "mostly at" Sean Lennon's home studio in New York City. We're giving away tickets to see Martha at Le Poisson Rouge on Thursday (10/11) via our Facebook.

We are also giving away tickets to The Walkmen's 10/18 show at Terminal 5 with Dum Dum Girls; and Doveman: The Burgundy Stain Sessions featuring Owen Pallett, Dawn Landes, and Steve Salett at Le Poisson Rouge on 10/12.

Speaking of Doveman shows and Wainwrights, help support marriage equality later this month at the Beacon.

In other milestones, Rage Against the Machine's self-titled debut turns 20 this year. To commemorate, the band are reissuing it as a box set, with "never-before seen early concert footage and full 2010 Finsbury Park Victory Concert along with remastered debut album, original demos and treasure trove of videos and music." Yours for only $136.

Likewise, Rancid are celebrating their 20th anniversary by releasing their entire discography as a huge box of 7"s. Pre-orders began today.

To quote Merge Records, "You're Living All Over Me by Dinosaur Jr., the groundbreaking album from the masters of alt-guitar rock, turns 25 this fall. To celebrate, Merge Records is releasing Chocomel Daze, a rare live show (featuring the classic, original line-up of J, Lou, and Murph) recorded in 1987 at Dorrnroosje, Nijmegen, Netherlands. Limited edition on 150-gram vinyl for the first time, this release follows their recent I Bet on Sky." Listen to one of the tracks at the bottom of this post.

Other new Merge releases include the Mountain Goats, Mark Eitzel, Mount Moriah and The Music Tapes.

Mark Eitzel is going on tour later this year.

Rick Ross dropped a new mixtape called The Black Bar Mitzvah. Give it a listen over at bvChicago.

The downside of Louis CK's massive, self-ticked tour: his Emmy-winning FX show Louie won't be back until 2014.

Bummer All Tomorrow's Parties news: ATP Japan has gone from postponed to canceled.

AND more stuff below...

We haven't announced who's playing the not-CMJ BrooklynVegan day parties yet this year.

Trail of Dead charts the rise and fall of candidate Rich Dobney in their new video "Catatonic":

The new album from The Luyas, who are coming to NYC for CMJ, Animator, is out next week (10/16). Maybe you picked it up early at the Dead Oceans booth at the Brooklyn Flea Record Fair this past weekend. If not you can stream it a week early via WNYC Soundcheck.

Kylesa, who is working on a new record, is streaming a new track "End Truth" from their forthcoming rarites compilation From The Vaults, Vol. 1. Stream it at Pitchfork.

If you forgot to listen to the live stream of Tori Amos' show at Le Poisson Rouge on Friday, the whole show was archived.

Have you serenaded your cat today?

Here's that vintage Dino Jr. track we mentioned above: