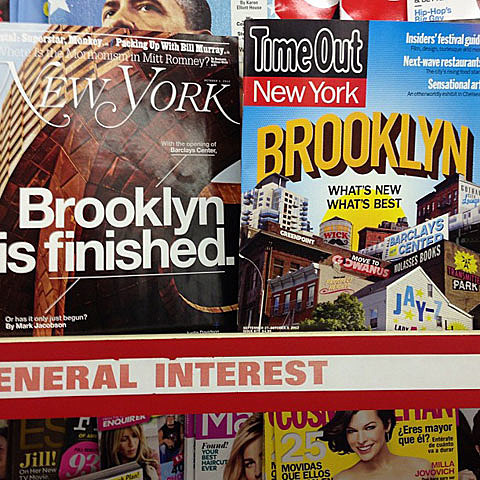 With the opening of the Barclays Center (follow @BrooklynVegan on Twitter for some scenes from the chaos), both New York and Time Out ponder the changing landscape of Brooklyn in this week's issues.

And regarding that Staten Island politician talking shit about her, Lady Gaga thanked him.

As mentioned, Soundgarden is releasing a new album, their first in 15 years, on 11/13. Now you can hear the first song which is streaming at the bottom of this post.

In other bands who were good in the '90s Barclays Center news and, Smashing Pumpkins warmed up for their arena tour with an intimate, two-and-a-half-hour show at Stubb's in Austin last night. The tour hits the Barclays Center in Brooklyn on Halloween.

Trevor Dunn, who is currently on tour as a member of Melvins Lite, took to his tour diary to comment on Green Day frontman BIlie Joe Armstrong's recent freakout: "That guy's main problem is that he doesn't realize that he is Justin Bieber."

Do you love the blown-out, pixelated artork on MIA albums? You may want to buy here coffee table book then.

On a somewhat similar publishing tip, Diplo "and photographer Shane McCauley are launching the zine series Blow Your Head. Each volume will explore a different country and musical genre.

Tour diaries are hot these days. (Have you read ours with Kelly Pratt whose touring with David Byrne and St. Vincent)? Diamond Rings and Stars writing about their adventures on the road for The Huffington Post. Those adventures included a show at Webster Hall this week.

Winter is coming for everyone, it seems. Neko Case tweeted today: "Dude. I'm just gonna admit to being balls-deep in Game of Thrones on CD."

While on the subject of rock star confessions, a recent quote from Pete Townshend: "What I remember of the size of Mick Jagger's penis - I remember it as being huge and extremely tasty."

Speaking of St. Vincent, today is Annie Clark's 30th birthday. Happy Birthday, Annie! We always liked this picture of her, by Chris La Putt, from her days as a member of the Polyphonic Spree: 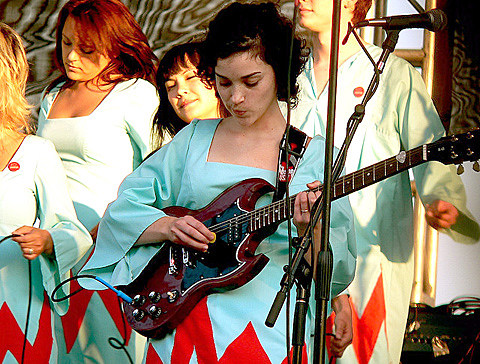 Catch St Vincent and David Byrne in Williamsburg Park on Saturday. How was their second Beacon show? Check out pictures from the first (also by Chris La Putt).

It's also Les Claypool of Primus' birthday, who turn 49. Catch Primus on tour this fall.

Not that surprising, but awesome -Austin just became the first Texas city to endorse marriage equality.

Austin music venue Scoot Inn, a popular place to be during SXSW, has a new owner.

Not that they're especially hard to find used, but The Beatles are finally releasing their remasters on vinyl.

Interpol are releasing a deluxe edition with previously unreleased bonus material of their debut album, Turn On the Bright Lights, which celebrates its 10th anniversary this year. Catch the band's frontman Paul Banks on his solo tour.

'C-86' fans take note: The Wolfhounds, who featured on that legendary NME cassette and broke up in 1990, are back with a new single. Look for "Cheer Up" in November via Odd Box Records.

Dolly Parton - "Iconic singer, songwriter, musician, actress and philanthropist - announced today that she will no longer be associated with the previously planned water park in Nashville."

Intimate portraits of rock stars shot by Barrie Wentzell for the (now defunct) British weekly, Melody Maker, during the 1960s and 70s, are on display at the Morrison Hotel Gallery starting tonight through October 21. Flavorwire has a preview.

Tales from 'Nobody Wants That': Deadline reports they're remaking Bonnie & Clyde as a TV miniseries starring... Miley Cyrus?

We are not immune to dumb stuff being passed around the internet, like this clip of the "worst death scene ever" (even though it has been altered for comedic effect from this). This guy does not like the feeling of bullets!:

Speaking of dumb: According to some people in Japan, the future of beauty lies not in great makeup, but in a perfectly formed bagel forehead.

Sometimes-BrooklynVegan photographer Brook Bobbins directed the new Mr. MFN eXquire video for "Position of Power" which you can watch HERE:

Have a great weekend!
--