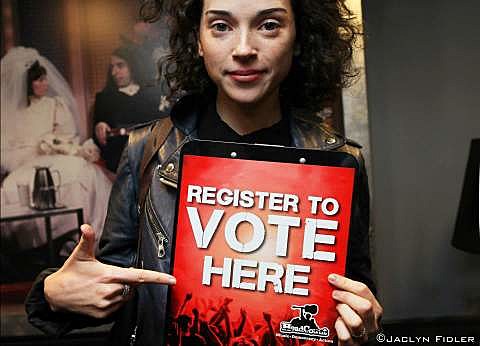 In addition to everything else we posted, today, here's some more, and some reminders too...

Hope to see you at Pianos tonight, unless of course you're celebrating Yom Kippur which started at sundown (or under 21).

It's also National Voter Registration Day, as miss Annie Clark has so kindly reminded us above. Did you register to vote yet? We also would like to know, however, what's the deal with the Tiny Tim photo in the background?

That photo is actually part of a series orchestrated by HeadCount where over 200 celebrities, including Jeff Tweedy, were photographed with "Register to Vote" clipboards. You can see them all here.

Speaking of St. Vincent, it's David Byrne / St. Vincent Week here in NYC. Their first of three area shows together happens tonight at the Beacon Theater, as Kelly Pratt pointed out in the latest edition of his tour diary.

Neil Young has started a Twitter account and will be taking your questions via it in October. Right now, though, @NeilYoung seems to handled by a marketing intern.

Paper Bag Records just released the free David Bowie tribute album, Paper Bag Records vs. The Rise and Fall of Ziggy Stardust and the Spiders From Mars, with covers by Austra & CFCF, PS I Love You, The Luyas, Yamantaka/Sonic Titan and more. Download it for free HERE.

Speaking of Yamantaka/Sonic Titan, they performed at the Polaris Prize Gala in Toronto last night, but ended up losing to Feist.

Converge is back with "Shame In the Way" a new song from their forthcoming LP All We Love We Leave Behind. Stream that new track, coupled with an interview with vocalist Jacob Bannon in the latest Show Now Mercy at Pitchfork. Look for the LP on 10/9 via Epitaph.

Sweden's Terrible Feelings have released a new video for "Next Round's On You" from their Shadows LP. Check that out below.

Field Report visited the A.V. Club's HQ in Chicago and took on the Sufjan Stevens mainstay "Chicago" for their Undercover series. Check out the clip below.

You can also check out Thee Oh Sees' side of the new Famous Class' "LAMC" 7" series which they were selling last night at their very sweaty Death by Audio show. It's streaming below.

Main Mountain Goat John Darnielle talks (vegetarian) food - including pizza, popcorn and, yes, hummus over at FoodRepublic. He and the band will be in NYC next month.

Um, Brian Wilson just posted this photo on his Facebook: 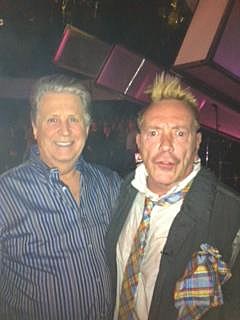 Download the new Revocation EP Teratogenesis for free via Scion.

If you've been wondering what perky Australian pop band The Grates have been up to, the answer is opening a coffee shop in their hometown of Brisbane.

Cat Power is beginning to introduce her new backing band via the Matablog. The first member we meet is guitarist Adeline Fargier-Jasso.

Factoid: One of the greatest heavy metal records ever recorded, Black Sabbath's Volume 4, was released exactly 40 years ago today.

New video for Joey Ramone's 'New York City' is out, deluxe version of his last solo album 'Ya Know' to be released November 23. From Rolling Stone:

Though he's gone and sorely missed, Joey Ramone lives on with the help of friends in the video for his "New York City." Tommy Ramone, Andrew W.K., Matt and Kim, 30 Rock's Scott Adsit, chef and TV host Anthony Bourdain and more join the tribute to the late rocker's beloved hometown, wandering the city's vast streets in stop-go animation.

Tegan and Sara, who will be opening for the Killers at MSG, announced their new album, Heartthrob, will be out in January 2013 but the record's first single, "Closer," is available today on iTunes and streaming on Soundcloud:

Patrick Fitzgerald and Julian Swayles of '90s-era shoegazers Kitchens of Distinction have reteamed for a new (non KoD) record, which you can read about on Fitzgerald's blog.

Lyor Cohen, influential bigwig at Warner Music Group and Recorded Music Chairman and CEO, will resign from his post after eight years at WMG, effective September 30, 2012. Cohen was an instrumental figure at Def Jam during their crucial early years and managed artists alongside Russell Simmons as part of RUSH Management. His first management client of note was RUN D.M.C. during their Raising Hell era.

Lee Fields & The Expressions have a new video for "Faithful Man", viewable, along with the other videos we mentioned above, right here:

Terrible Feelings - Next Round's On You