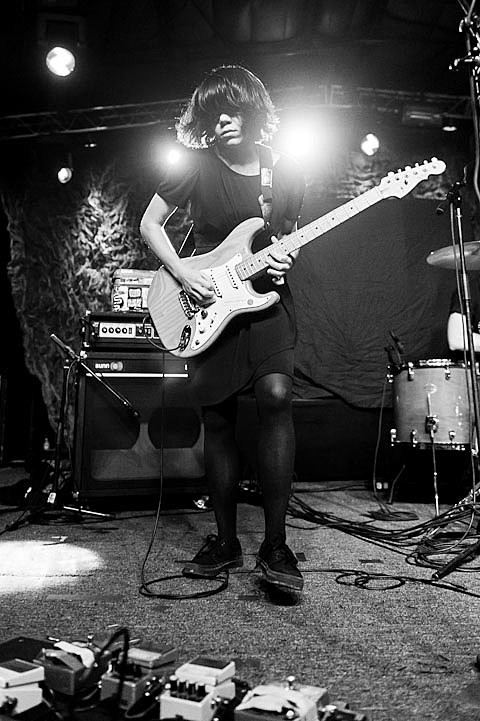 Screaming Females had to cancel tour dates because Marisa has been sick, but she toughed it out and managed to finish off their TX run with Garbage last night in Austin.

Our pals at Mercy, who are sponsoring the BrooklynVegan CMJ parties this year, are giving away two CMJ badges, exclusive access to CMJ shows, a week's worth of Mercy hangover prevention beverage and a chance to be Mercy's CMJ Reporter. To enter, visit their Facebook.

Off!, who are heading out on tour with the Spits soon, have a new video for "Wrong" featuring Jack Black. Check out the clip below... sweet Sonny Chiba reference in there guys.

UPDATE: Did you watch the debate tonight? Marlarkey!

Listen to Jarvis Cocker rate new records by Adele, Flying Lotus and more on BBC 6Music's "Roundtable" which is live from the man's hometown of Sheffield, England.

Godspeed! You Black Emperor, who are still streaming their new album, and who just played two shows in Austin, gave a rare, long, email interview to the Guardian.

Cops in TX found a loaded gun on Nelly's tour bus at the same location that Fiona Apple, who played Port Chester last night, was arrested.

Miguel, whose new album is out on iTunes (as you may have noticed via an ad on this site), played Letterman and announced a tour.

Coliseum (with new bassist) have entered the studio with J. Robbins to begin tracking. They are keeping detailed reports of their progress on Facebook.

Swedes Peter Bjorn and John wrote a song, "I Wish I Was a Spy," for Yo Gabba Gabba! that you can check out over at NPR. It's on the new volume of the Music Is Awesome! series which also features tracks from Metric, Belle & Sebastian, CSS, Cut Copy, The Roots, The Bird And The Bee and more.

---
Fools Gold Records, who will celebrate their 5th Anniversary next week at Music Hall of Williamsburg, have a new video series called "Food Gold." Check out the latest installment, where Kool Keith makes French Toast:

Holly Golightly, who recently toured though NYC, are on a new CD with Paul McCartney, Andrew Bird and The Shins.

Check out a live video of Nu Sensae at Heathers during their recent tour through NYC. If you missed them, check out pictures from Tommy's Tavern.

Watch Tegan & Sara discuss their dating preferences, their relation to each other, and more, on.. The Gorburger Show:

Speaking of Tegan & Sara, they're one of the many artists who will be streaming live from ACL on Friday. Alabama Shakes too. Meanwhile. watch footage from the Alabama Shakes 'Dream Show' in Chicago.

Rick Springfield, who may or may not be still pining away for his bud Jessie's main squeeze, performed in the subway and Penn Station. His documentary is now playing at NYC's IFC Center.

Watch Mike Tyson and Wayne Brady kill the Bobby Brown favorite "Every Little Step" (Bobby's in it too) below.

And here's that OFF! video with Jack Black we told you about above:

OFF! - Wrong with Jack Black