Real flyer on Grand Ave. 'HIPSTERS ONLY Please!' (via @adelaloconte) 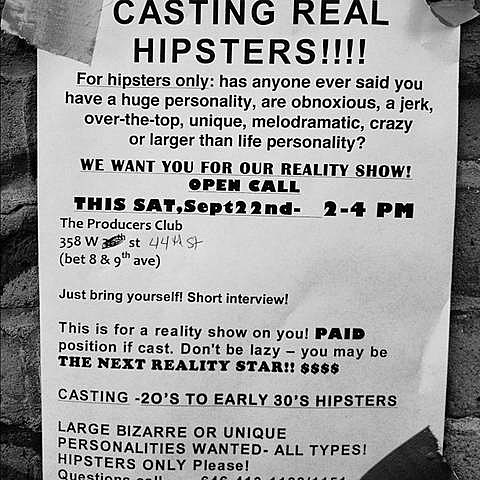 Guy Fieri, Smashmouth frontman Steve Harwell and Sammy Hagar are teaming for what is likely to be the most exclamation-point-filled cookbook of all time. Also, maybe the worst.

Those of a certain age may have fond, fuzzy memories of MTV's sock puppet hosts Sifl & Olly. Well they're back! Reviewing video games? Sort of. Check out a video below.

Speaking of fond MTV memories, you can catch Kurt Loder in the flesh at at the Bell House in Brooklyn tonight (9/20) (with Julie Klausner who has other upcoming gigs too).

Fiona Apple got busted for hash possession at the same Texas checkpoint that got Snoop Dogg and Willie Nelson. She's out on bail, but tonight's ACL Live show is canceled (which means no pictures tonight on the BVAustin Instagram).

Speaking of Austin, Ume is funding a new record via Kickstarter.

That said, we're sure Owen Pallett, like many others, was happy to hear that Amanda is now paying all musicians.

Speaking of Patrick Carney, congrats to him and his now-wife Emily Ward on their recent wedding. Will Forte officiated. Shaun White was arrested.

The first track from Neurosis's new LP Honor Found in Decay has slipped out. Stream "At The Well" at NPR now.

Little Pete from The Adventures of Pete and Pete calls Lindsay Lohan a hypocrite.

The Pop Music Hall of Fame is set to be constructed in Canonsburg, Pennsylvania which is fairly close to Pittburgh. Iinitial nominees include The Beatles, The Beach Boys, Bob Dylan, Simon & Garfunkel, and more.

Samsung mocks people who think Apple's new iPhone is "the next big thing".

Edvard Munch's The Scream will go on view at The Museum of Modern Art for a period of six months beginning October 24.

Time Magazine named the 50 greatest websites and, no, BV did not make the cut.

Everybody loves the '90s, apparently.

Last but not least,. Dirty Projectors are "About To Die"!