Yeasayer in Austin earlier this month (more by Tim Griffin) 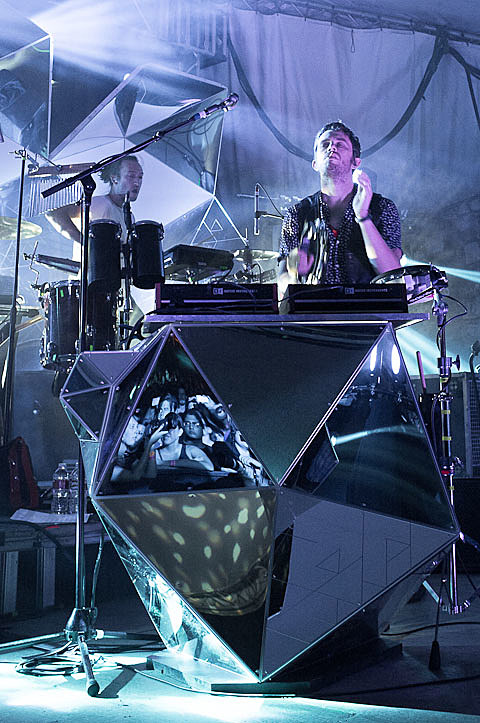 Yeasayer played Summerstage last night (9/12). We missed them but caught them in Austin where Dead Can Dance also recently played. How was the NY show?

As BV Chicago pointed out, Smashing Pumpkins frontman BIlly Corgan opened a tea shop outside of Chicago, and he played acoustic sets there today to celebrate.

Bat For Lashes is releasing her new album, The Haunted Man, on October 21. Back in July, she revealed the first album cut, "Laura," and today she's let loose a second taste of the album. Continuing a trend thus far of naming songs after women's names, this one's called "Marilyn." You can stream it below.

The Walkmen, whose tour brings them to NYC for a show at Terminal 5 on October 18 with Dum Dum Girls (tickets) will play Conan tonight.

---
Green Day have an international tour which brings them to NYC for shows at Irving Plaza this Saturday (9/15) and Barclays Center on January 16. While Green Day are getting ready for their Irving show on Saturday, frontman Billie Joe Armstrong showed up to The Bowery Electric for a surprise acoustic set last night (9/11) with Green Day touring guitarist Jason White for their Old Soul Revival weekly songwriter series. Other guests included Tommy Stinson (of The Replacements), who played with his daughter Ruby, and Jesse Malin. Billie mainly played material off their three upcoming full lengths, but threw in a few classics as well. Here's a video of him playing "Rusty James."

We're presenting a last-minute Jon Spencer Blues Explosion show at The Bowery Electric on September 18, the date their new album, Meat and Bone, comes out. Head HERE for details on how to win tickets.

Grindcore heroes Pig Destroyer are releasing their new album, Book Burner, on October 23 via Relapse and they just revealed the first cut from that album, Burning Palm, which you can listen to via a lyric video. Pig Destroyer will be in NYC for CMJ on October at Public Assembly with KEN Mode, Early Graves, and Encrust (tickets).

Is the "Brooklynization of culture" "killing regional music scenes"?

Check out pictures from the BV-sponsored Pallbearer and Royal Thunder show at Knitting Factory on Tuesday (9/11).

Did you RSVP for the free Danny Brown and Kitty Pryde show yet?

What do you think of Kanye West's new G.O.O.D. Music album, Cruel Summer?

Steve Albini doesn't agree with Amanda Palmer's use of fan musicians, he does NOT think she is an idiot. UPDATE: Amanda addresses the issue

The new episode of Weird Vibes just went online, which comes to us from the 2012 VMAs. Red carpet correspondent Riff Raff hands out "Vibey Music Awards" to whoever will stop and talk to him in between music videos from Ariel Pink, Animal Collective and Major Lazer. Watch it below.