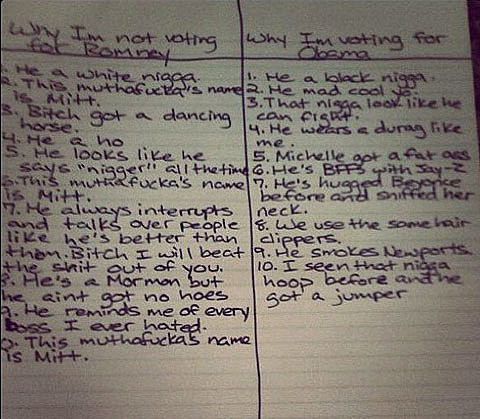 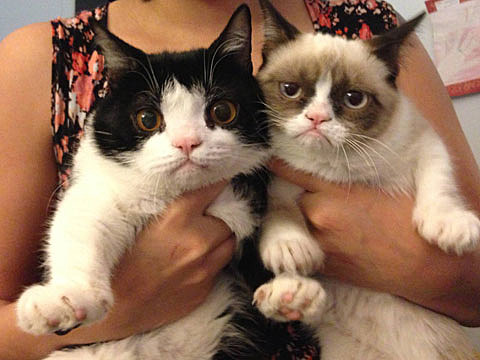 Did Snoop Dogg talk much politics at his Wellmont Theater show last week? That picture above, no not the cats, is his Tweeted list of reasons for voting for Obama, and for not voting Romney.

Kanye West has much less to say, for now. All his amazing tweets have been deleted except for one new one that says "BE BACK SOON". UPDATE: Now there are also three tweets about Steve Jobs.

Speaking of Chicago hip hop, Lupe Fiasco and the NY Times have some more to say on the subject (Chief Keef, etc).

Bummed to hear that Big Boi, who recently played Chicago's North Coast Music Fest, replaced Little Dragon with Kelly Rowland on the final version of the song he performed live with Little Dragon in Austin.

The Weeknd, who has three NYC shows coming up, got all emo and wrote a letter to fans promising no dissapointment.

Missy Elliot may actually release an album this year.

Speaking of, Jay-Z is in a new marriage equality ad.

Speaking of, congrats to Kaki King and Jessica King! And to Sam Champion and Rubem Robierb!

Speaking of LPR, Micachu whose Williamsburg Park show tonight is cancelled, is playing there Monday.

Menomena just played Austin and are touring their way towards NYC. Check out their new video for "Plumage" below.

We're also giving away tickets to Jens Lekman and Taken By Trees' Terminal 5 show (tickets are also still on sale).

Klaus says: Your man Klaus has discovered yet another juvenile wormhole for his bizarre anglophilia thanks to Netflix's recent inclusion of The Inbetweeners as part of their on-demand viewing choices. Besides being an epic fount of high-school level jokes on masturbation, homophobia, alcoholic and sexual endeavors, The Inbetweeners also features a fount of music by acts like Paolo Nutini, The Maccabees, Air Traffic, Calvin Harris, The Ting Tings, Arctic Monkeys, Theaudience, The Fratellis, Vampire Weekend, Two Door Cinema Club, Phoenix, General Fiasco, Gorillaz, Hot Chip, Belle & Sebastian, Field Music, Jamie T, The Libertines, Rihanna, Oasis, Jack Peñate, Guillemots, The Feeling, Kate Nash, The Wombats, The Jam, The Cure, Lily Allen, Mumm-Ra, Kylie Minogue, Feist, Adele, Oasis, Biffy Clyro, Passion Pit, Royworld, MGMT, Maximo Park, and The Cribs. This blurb has absolutely nothing to do with the 2012 musical climate but, Jesus F-Ing Christmas, this show is absolutely hysterical and the musical accompaniment is genius. Hop on the bandwagon, ya bell end.

Yellow Ostrich will release Ghost, a 6-song EP, on October 22.

Check out the Brooklyn Historical Society's Map of the Month (this month it's the Gravesend and Coney Island areas in 1787).

Looking for Halloween costume ideas? How about Hall and Oates? Speaking of, some 2500 fans in Las Vegas sat in the dark and silence for 15 minutes recently when the power went out during one of their shows.

SPIN did a feature on Ed Droste's dog.

A trip to Australia in January, anyone? The Museum of Old & New Art (in Hobart Tasmania, Australia) holds their Festival of Music and Art from January 16-20, 2013. The lineup features an eclectic mix, including David Byrne & St. Vincent, Dirty Projectors, Death Grips, Amanda Palmer, Pretty Lights, and more.

Check out the new video for Nas's "Cherry Wine" from Life Is Good, featuring the late Amy Winehouse: