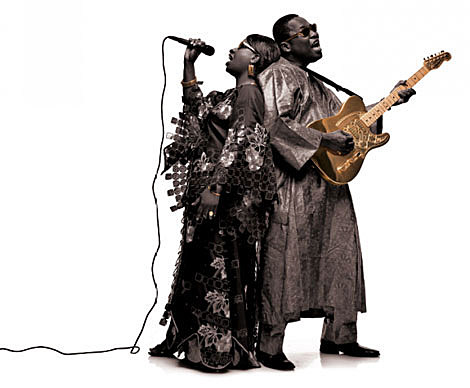 Back on November 21st I asked, "What is the best album of 2008?" In that post I listed the top ten albums according to Metacritic's aggregated critic-rating statistics. At the time, The Bug held the number one spot for his album "London Zoo".

Amadou & Mariam's Welcome to Mali was released on November 17th in the UK and hadn't even been listed on Metacritic yet. It appeared on the site a week or two after that, and it in turn knocked The Bug down to the number two spot. To this day "Welcome to Mali" holds the title of best rated album of 2008... even though it doesn't come out in the U.S. until March 24, 2009.

In June A&M will visit our country again, to give us some more of their great live shows...

The singer Mariam Doumbia and her husband, the guitarist/vocalist Amadou Bagayoko, have been making music together since they first met and fell in love at the Institute for Young Blind People in Bamako, Mali's capital, three decades ago. Over the last few years, they have achieved remarkable critical and popular acclaim in Europe and North America.

Amadou & Mariam are especially beloved for their live shows - they recently performed in the Africa Express event that was part of the BBC Electric Proms festival; the concert also featured Johnny Marr, The Magic Numbers, Damon Albarn, and Hard-Fi as well as numerous African artists. They will be headlining a Spring tour and will be opening for Coldplay in July.

Tickets are on sale (@ noon) for a June 8th headlining date at Webster Hall in NYC. Last time they were here was for All Points West.