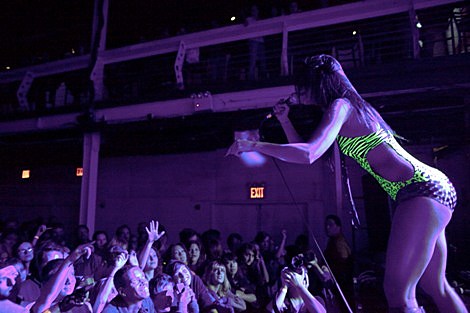 "They're both most commonly associated with bigger male underground stars, but tonight Amanda Blank and Maluca should prove themselves major players in the electro-pop-hip-hop-ghetto-Latin nexus. Philly's Amanda Blank has worked with Spank Rock, and handily delivers an equally bumping and even filthier and funnier take on B'more gutter music. Maluca's debut on Diplo's Mad Decent Records more than lived up to his much-heralded Major Lazer release. The flaming meringue that is Maluca's "El Tigeraso" made for one of the most energetic, gripping singles of 2009." [Village Voice]

That blurb describes the gig happening at Santos Party House tonight/Friday (1/29). Tickets are still on sale. The NYC show is one of two Amanda and Maluca are playing together this weekend. They each also continue on their own after that. All dates and some videos below...

MALUCA @ ONE STEP BEYOND from TONE on Vimeo.