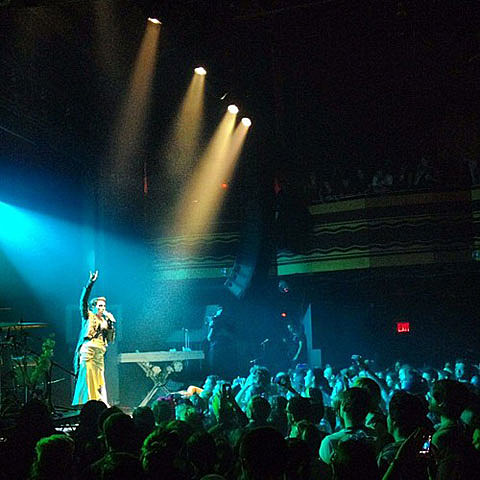 You can read the whole thing at her site, but here's a NYC-show related excerpt:

there were cities like new york where jherek - and everyone in the band - really wanted to make sure we had a 100% tried-and-true string corps. he didn't want to bank on possibly risky volunteers that night. chad raines, my guitarist, who's also in charge of wrangling the horns, agreed on that front as well. so we called our more professional horns and strings friends in new york, and we freed up the budget to pay them. we're doing that in some cities, and in some cities it's a total grab-bag of strangers on stage.

it's very important to me that we clarify that - not everything you see on stage is black and white, and those specific musicians in new york (and in some other cities) who got paid shouldn't be put in the same category as the volunteers. WE called THEM personally because we had lots of experience with them and knew what we were gonna get.

so you know (and because a photo of them has been circulating), in NYC, they were: sam kulik (who i know from our co-touring days with nervous cabaret), matt nelson (who's also in tUnE-yArDs), kenny warren, phil rodriguez, and "moist" paula henderson (aka Secretary). as many people saw, they ripped it UP on the webcast. sam and paula also showed up to play our kickstarter celebration (and were paid in money...AND beer).

in new york and in DC, three of the eight or nine horn and string players were actually from our opening bands: kelly and alec from the band Ronald Reagan hopped in on sax duty, and jessie from The Simple Pleasure volunteered to play viola at any gig she was at. in DC, we had a combination of people from the opening bands, a couple of horn players who were strict volunteers, and three string players from Classical Revolution who also volunteered their time.