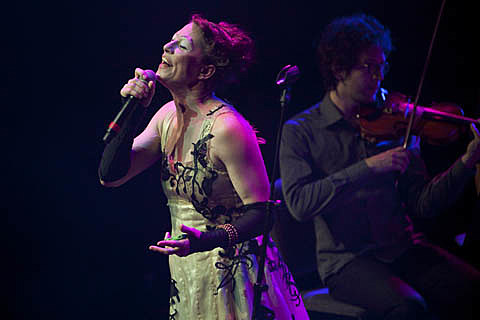 Amanda Palmer has now raised over $1,000,000 on the Kickstarter page for her new album, which had a goal set of $100,000. The campaign closes at midnight tonight (5/31) and in celebration Amanda will throw a party in Gowanus. Here's the press release:

Singer, songwriter, piano-slayer & super-blogger Amanda Palmer re-solidified her title as the queen of crowd-sourcing this week when she hit over $1 million on her Kickstarter. As a thank you to her community of loyal supporters, she will host a very FREE, ALL-AGES special event in Brooklyn tonight counting down the final hours of the 30-day Kickstarter campaign with those who have helped to launch her ambitious global release! Kicking off on a closed-down-street in Gowanus at 6pm, it will be open to the public and will count down to a celebratory performance-art-endurance countdown featuring Amanda and her band, The Grand Theft Orchestra. High-level kickstarter backers will then be treated to a special post-midnight performance in a nearby loft. The event will take place at 55 9th St. (btw Smith St & 2nd Ave) in Brooklyn. Those who are not able to make it to the street party in person can stream the entire event, including the live concert, at http://partyontheinternet.com/. Party go-ers should keep an eye on that link for any last minute updates & details.

The Kickstarter campaign was in support of Amanda's new album, Theater Is Evil, which will see a release this September. You can download the first single from the album, "Want It Back," above.

Amanda will be on tour this summer, which includes another live show in NYC at the sold out Music Hall of Williamsburg on June 27.