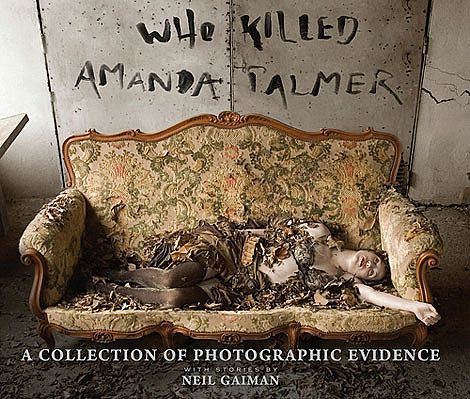 As previously reported, Amanda Palmer is hard at work preparing her own high-school musical...

I am going to be performing in an original play with music titled "WITH THE NEEDLE THAT SINGS IN HER HEART" at lexington high school. the show is inspired by the album "in the aeroplane over the sea" by neutral milk hotel and is being written (and we're almost done!) by me, the cast and my former drama director and mentor, steven bogart.

Tickets for With the Needle That Sings in her Heart are on sale now. Palmer has been posting frequent updates on her blog and Twitter account about the production of the show and other tidbits, such as this description:

using "in the aeroplane over the sea" by neutral milk hotel as an inspiration, the kids (a cast of 20) have been putting together a play through improvisation. the process started about a month ago and i've been in the last two weeks of rehearsals helping shape the plot and characters and create the musical accompaniment, mostly songs from the record played live. often with me playing the instruments, but the whole cast and some extra musicians will be presenting the music....

Palmer's next live show is at Coachella on April 18th. She also has a show scheduled at NYC's Highline Ballroom on Friday, June 5th (tickets on sale April 17th).

As Pitchfork recently reported. Amanda is also making a public effort to get dropped from her Roadrunner Records contract. She even sings a song about it to the tune of "Moon River". Check out the video below. In a letter to Bob Lefsetz she wrote:

my label-dropping game has become very fun. please pray for me.

it's a lesson in how the future of music is working - fans are literally (and i mean that....literally) lining up at the signing table after shows and HANDING me cash, saying "thank you".

i had to EXPLAIN to the so-called "head of digital media" of roadrunner australia WHAT TWITTER WAS. and his brush-off that "it hasn't caught on here yet" was ABSURD because the next day i twittered that i was doing an impromptu gathering in a public park and 12 hours later, 150 underage fans - who couldn't attend the show - showed up to get their records signed.

no manager knew! i didn't even warn or tell her! no agents! no security! no venue! we were in a fucking public park!
life is becoming awesome.

Cellist Zoe Keating, who toured Australia with Palmer in early March, will be performing with Palmer at Coachella. The pair recently covered Muse's "Time Is Running Out" live (video below).

Palmer is also releasing a Who Killed Amanda Palmer book -- "a fine art hardback book of "photographic evidence" with contributions from celebrated blogger and photographer Kyle Cassidy, Beth Hommel, Tegan Rain (of Tegan and Sara) and many others. Fictional stories to accompany the photographs have been penned by best-selling author Neil Gaiman." That book will be available for pre-order on Palmer's website starting Monday, April 20th at noon (cover art above).

Full With the Needle That Sings in her Heart press release, plus Palmer singing an impromptu song with John Wesley Harding at SXSW and other videos, and all tour dates, below... 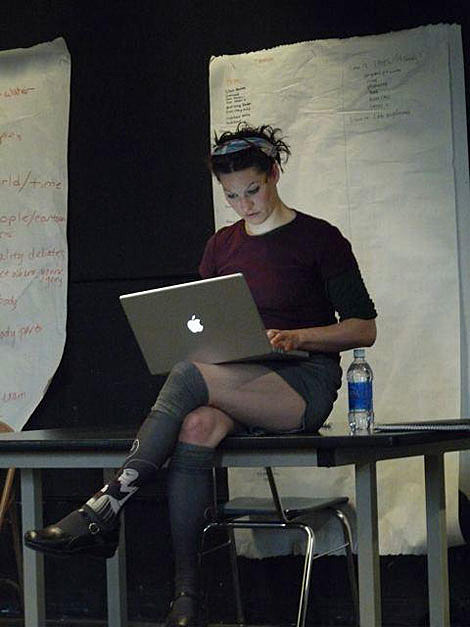 April 8, 2009- AMANDA PALMER--celebrated punk-chanteuse and pianist for the popular rock band THE DRESDEN DOLLS, and, more recently, hailed for the success of her Ben Folds-produced solo album Who Killed Amanda Palmer--is returning to her old stomping grounds at alma mater LEXINGTON HIGH SCHOOL. The reason? To create an original play with her former drama teacher, STEVEN BOGART along with a cast of twenty students. The play is written from scratch by the ensemble, the content of which is inspired by the music and lyrics of the critically hailed album In the Aeroplane Over The Sea by celebrated indie rock band NEUTRAL MILK HOTEL.

Located in the suburbs of Boston, MA, the Lexington High School Drama Department played a huge role in the development of Palmer's musical and theatrical sensibilities. She says: "There was a real sense of wild experimentation with Steve Bogart. To say he was my creative mentor is a huge understatement. I'm afraid that people will hear the words 'high school drama' and assume that this stuff will be corny and immature, and I can't stress enough how intelligent and profound these kids are...they're willing to take risks that adults don't take. They're fearless; their motivations are really pure. It's so inspiring. I've seen workshop shows through the years at that high school that rival most stuff in downtown New York." Steven Bogart, who has been teaching drama for twenty years in Lexington explains, "The process is about making a kind of creative broth by using exploratory improvisation as a tool to generate images, characters, concept, scenes and language. There is something amazing about it because it is simultaneously transparent and mysterious."

Bogart says about Palmer: "While in high school, Amanda embraced the process of developing original plays, and when she was a senior, she developed a piece based on the music of The Legendary Pink Dots called 'Asylum.' The theatrical post-modern form of the piece challenged the Massachusetts High School Drama Guild to rewrite their criteria for judging the state drama festival. For us, now in Lexington, our prodigal art-daughter has returned to create dynamic theater with us."

The play's current working title is "The Needle That Sings In Her Heart" and centers around Jewish diarist and Holocaust casualty Anne Frank and the idea that imagination and the creative process are essential tools for human survival and redemption. The process that Palmer, Bogart and the students are using to create this piece of theater is unorthodox, but familiar to Palmer. During her attendance at LHS (1990-1994), Palmer took part in several workshops of a similar nature, wherein a group of students under Bogart's direction would write, rehearse and present a show from scratch during a two-month workshop. "This is the way I grew up understanding theater," Palmer says. "We created magic out of nothing. I always hated the boring stock plays and musicals, they seemed lifeless. Bogart always encouraged us to use our brains and hearts to dig deep and find something meaningful and original to put on the stage. His influence on my artistic career couldn't be more direct because he was the first adult in my life to allow and encourage me to explore the dark, human side of myself through theater and music. It was because of Bogart and the drama department that I wrote, directed and presented my first play and sang my first original songs to the public."

The students in the production span from fourteen to eighteen years of age and have varying degrees of experience with creating this sort of theater-from-scratch. "Writing a play as a group instead of as a lone playwright is crazy," says senior Mariah Slone, "We all nosh on each other's ideas and rehearsal is this great big journey into the collective unconscious of the cast. Together, we shape this show which none of us could have conceived individually, but that all of us can own as our brainchild."

Palmer and Bogart began the discussion about some kind of collaboration years ago, and, after Bogart responded enthusiastically when Palmer handed him a copy of In the Aeroplane Over the Sea, their shared love of the record seemed like a perfect launching point for the project. An album whose esteem and word-of-mouth growth has cemented it as a cult classic in the indie rock pantheon, In The Aeroplane... is a spiritually motivated work that could be loosely interpreted as an homage to the beauty of life as contrasted with the horrific fate of Anne Frank. The sounds of lo-fi indie rock mash together with hints of psychedelia and garage rock. The record is packed with strange and beautiful lyrics that tie together images of death camps, circus wheels, flaming pianos, blossoming flowers and two-headed boys in jars. Jeff Mangum, the one-man driving force and lyricist behind Neutral Milk Hotel, maintains his own mystique. Magnum vanished from the public eye in 1998 when uncomfortable amounts of praise and attention for In the Aeroplane... drove him away from the spotlight.

In the show itself, Palmer plays a variety of instruments while various cast members share the vocal duties. But Palmer insists that this show should not be classified as a musical, "it's a play that uses music, but it's not a musical. We are trying to infuse the music into the show in an integrated way with no sense of schticky Broadway 'let's-all-burst-into-song.' The profundity of the subject matter makes those sort of typical 'musical' devices anathema to what we're trying to accomplish. We're trying to keep these songs as sacred as possible and use them to really drive the plot in a way that's essential." One student, freshman Luke Johnson, relates: "Jeff Mangum's album is haunting, portraying the agony of human suffering in an odd, upbeat manner. For me it strips things down to a very raw state, letting what really matters show through...working on this material is really tough, and this project has shed a whole new light on the Holocaust - delving deep into the feelings and personal aspects of its victims."

"The Needle That Sings In Her Heart" will be presented on May 7th, 8th and 9th at the Lexington High School Auditorium. The shows are all ages and $10.00. Doors at 7:00 p.m., show time 7:30 p.m. Tickets are available at amandapalmer.net/tour starting Monday, April 13th at noon EST. Pre-ordering tickets online is highly recommended as the shows are expected to sell out. For more information, please visit amandapalmer.net/lexington