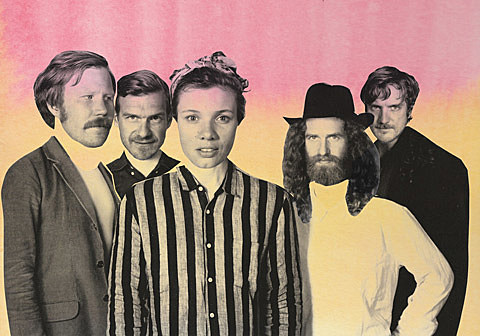 You may remember we wrote about Swedish indie "supergroup" Amason -- featuring members of Miike Snow, Dungen, Little Majorette and more -- back in February 2013 right after they'd released their Carpenters-esque debut single "Margins." Since then, they put out an eponymous EP last year and a new single, "Ålen," at the start of 2014, offering up more of their lush pop. Amason have just signed to LA's Fairfax Recordings who will release their debut album, Sky City, early next year. Ahead of that, Amason have just released new single "Duvan" that definitely has shades of Buckingham/Nicks and is a fine showcase for Amanda Bergman's smoky vocals. You can stream it below.

Amason will be heading to North America next month for their first shows over here, including NYC for CMJ. The only announced appearance so far is for KEXP's annual live broadcasts, at The Cutting Room on October 22 at noon. KEXP's CMJ schedule hasn't otherwise been announced but stay tuned for that -- and more Amason CMJ shows. After the fest, the band heads to LA to play The Echo on November 3.