This one's for you, dude. Yes it has been a while since Amazing Baby have graced this column which started almost exactly a year ago and were featured in my inaugural post. Since then, the band have gone through a few line-up changes, expanded, contracted, and toured Europe a couple times (once with buddies MGMT). The band open for Phoenix at Terminal 5 this Friday (6/19) and will release their debut album, Rewild, on Tuesday, June 23. (It's out now on iTunes.) Few are more aware than me that a lot of people seem to dislike this band, though I think most of that comes from the company they keep and their image more than the music itself.

Do they have questionable taste when it comes to fashion, their album covers and music videos? Maybe, but I don't think you can accuse Amazing Baby of the same, musically, or jumping on any bandwagons. Rewild is psychedelic without being being retro, danceable at times, heavy, glammy, catchy as hell and full of inventive arrangements and production. It rocks and swoons and sounds great loud. And they don't sound like any single other band out there. You can download "Smoke Bros" (which reminds me of Shriekback a little bit) at the top of this post. And you can stream the whole album at their MySpace. 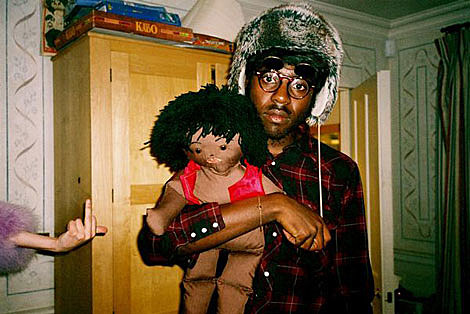 Still reading? Phoenix's openers at tomorrow's (6/18) Music Hall of Williamsburg is Lightspeed Champion. That show is beyond sold-out, but tonight (6/17), he's playing a warm up show at Mercury Lounge, which will be his first in a long time. Dev has become a Brooklyn resident in the last year, which is where he also recorded his still-untitled second solo album (due in Oct.) with help from the Spacecamp boys who will also be his backing band at both shows. As a fan of last year's underrated Falling Off the Lavendar Bridge, I'm anxious to hear Dev's new material. Tickets are still available.

Spacecamp are also playing a set of their own at Mercury Lounge, opening the night, though you'd think it would've made more sense for them to play next-to-last and just have Dev come out and join them for a seamless transition, but I am a blogger not a stage manager. The band now have a full-time keyboardist in the mix which has made them a bit funkier (clavinet tends to do that). You can can get an idea of that in the footage Joly shot from Spacecamp's Annex show two weeks ago (below). In between Spacecamp and Lightspeed are Apache Beat and New Orleans' Hurray for the Riff Raff. 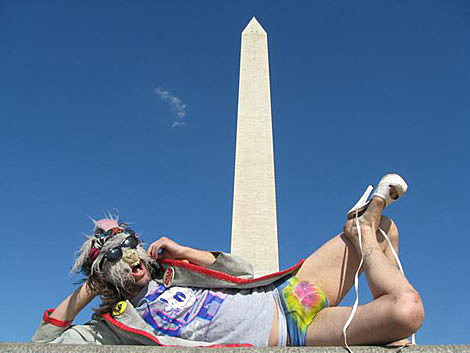 The show I'm most looking forward to this week, though, is this Friday (6/19) at Bruar Falls: Nobunny, Hunx and His Punx, German Measels, Baby Shakes and The Beets. I wrote about Nobunny the last time he was through town, having just caught him at SXSW, and his shows are fun and creepy all at the same time. (It's that mask.) If you haven't heard his debut, Love Visions, it's a lot of fun if you like bare-bones Ramones style punky pop. He recently put out a cassette-only album, Raw Romance, of demos and outtakes that was also pretty good -- it's sold out but maybe he'll have copies on tour with him. Nobunny also plays an all-ages show at Death by Audio two nights later (6/21). 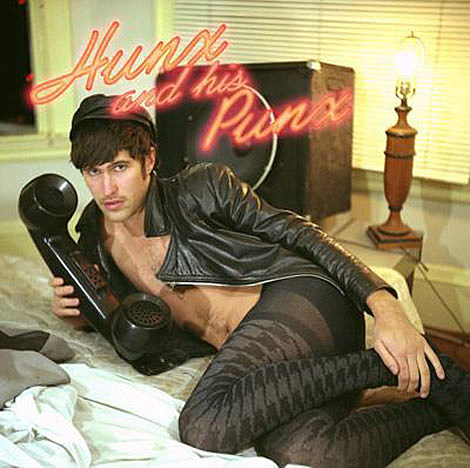 The whole evening at Bruar Falls sounds like fun. Hunx and His Punx look and sound like they lept out of a John Waters movie and judging by their music videos I can only hope they bring that level of camp to their live show. Hunx has a new single out, "Teardrops on My Telephone," on Jay Reatard's Shattered label (also home to Nobunny). You can see the video for that song below. Hunx is playing a bunch of shows and parties this week, and all his dates are at the bottom of this post.

Also: the girl group punk of Baby Shakes; German Measels' fake mustache pop; and The Beets who seem to play every four days but I've enjoyed every show I've seen of theirs (including two previous at Bruar Falls).

Other shows of note: there's a TWII-approved line-up at Glasslands on tonight (6/17): Sisters, My Teenage Stride, and Knight School. All the bands are good, but if you haven't seen Sisters yet, you should really rectify that as soon as possible. On of my all time favorite new local bands of the moment.

Crocodiles are back in town, playing Union Pool on Thursday (6/18) and Mercury Lounge on Saturday (6/20). I don't care what Pitchfork says, I think their album is pretty good and they were fun at Pianos earlier this year.

And it wouldn't be a proper TWII column without mentioning this year's Twee as Fuck party at Cake Shop. TaF is a monthy party in London, as well as a fanzine and label, and they bring it over here in June. I went to last year's moderately-attended event which featured Afternoon Naps, Bears, and Pains at Being Pure at Heart who are headlining again this year though it's an understatement to say that things have changed for them. Not that they don't totally deserve it, but it still boggles my mind that the Pains have become a big as they have. TPOBPAH just announced a fall tour and those dates are below. Their next NYC show after Cake Shop is at South Street Seaport (home of tonight's Jon Spencer Blues Explosion Show).

With a lineup that also includes their Slumberland labelmates Crystal Stilts and Cause Co-Motion, as well as London's Hatcham Social, this is gonna be one super-packed, sweaty night at Cake Shop. Advance tickets are sold out, but there are a few available at the door if you get there early. Doors are at 7pm.

That's it for this week. Flyers, videos, and tour dates are after the jump.... 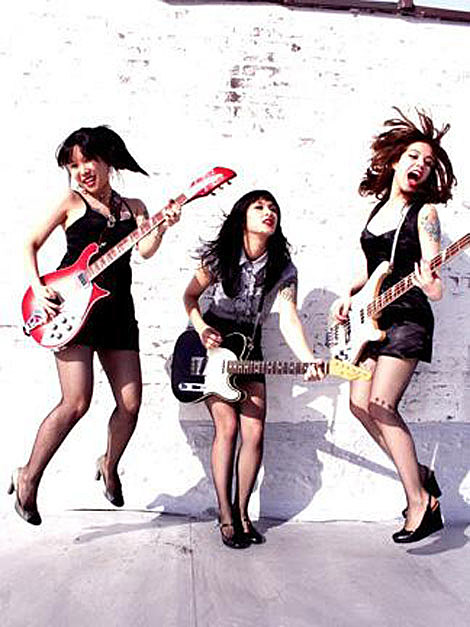 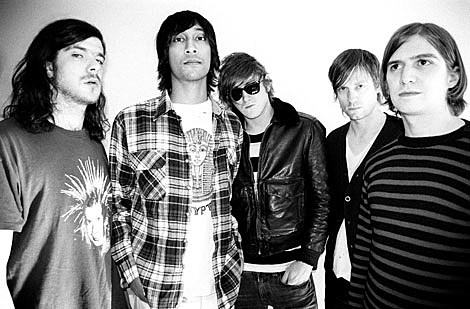 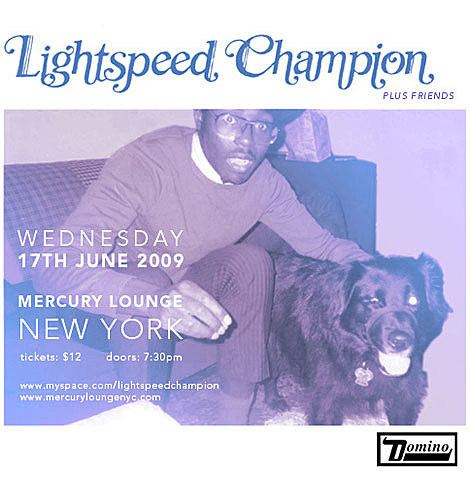 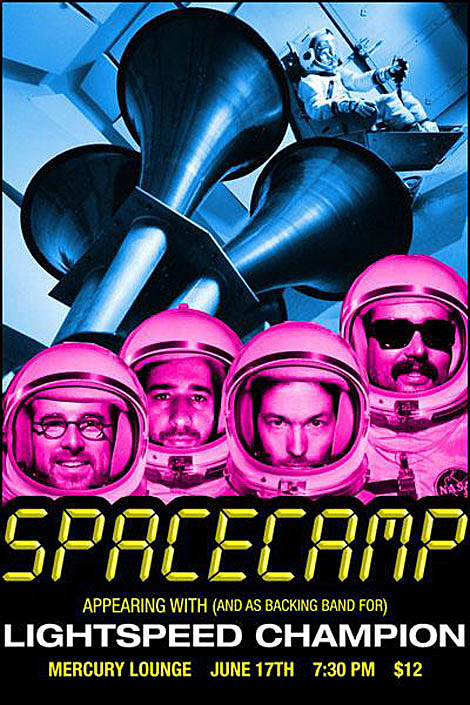 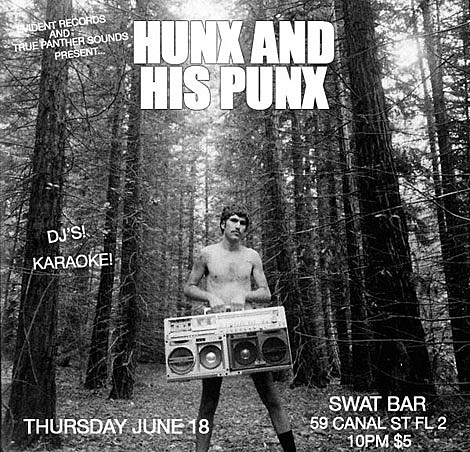 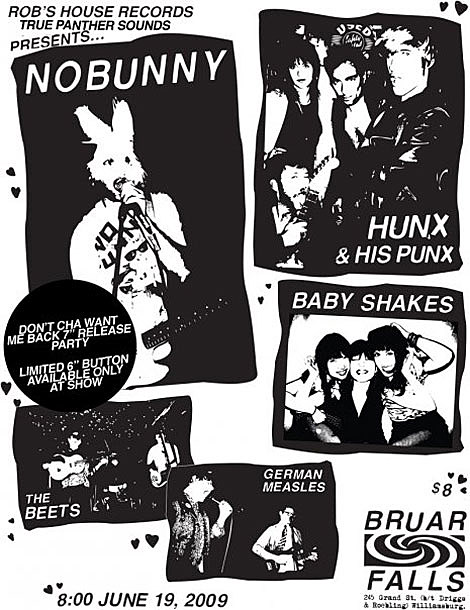 Hunx and His Punx - "Teardrops on My Telephone"

The Pains at Being Pure at Heart - "Young Adult Friction"