Deafheaven at 285 Kent in July (more by Lukas Hodge) 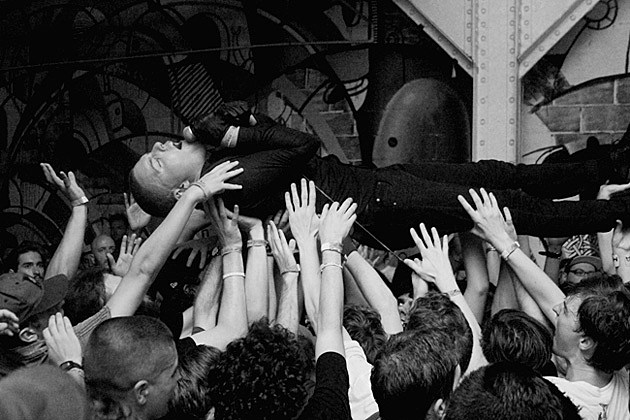 The discerning folks over at Amazon have announced their picks for the best albums, songs and artists of 2013, and Daft Punk's Random Access Memories, Vampire Weekend's Modern Vampires of the City and Chvrches' The Bones of What You Believe filled out the top three spots on their best albums list.

A bit more of a surprise was Deafheaven coming in sixteenth overall with Sunbather and landing "Best Hard Rock & Metal" honors in both the artist and album category--Russian Circles won "Best Hard Rock & Metal" song with "1776", stealing the trifecta that was just within Deafheaven's grasp. Sixteenth-best album of the year and best hard rock and metal album of the year on a huge site like Amazon is pretty high profile for Deafheaven, the San Francisco post-black metal band that still road warriors-up for shows at small clubs. But they've been on the big stage before--to be specific, for Apple's keynote announcement for the iPhone 5c, when the cover of Sunbather graced one of the five iPhones on the projection screen behind the presenter.

Check out the top 20 best albums according to Amazon below, compare that to more old school and indie retailer Rough Trade's list, and head over to Amazon to see what else they thought was a cut above...