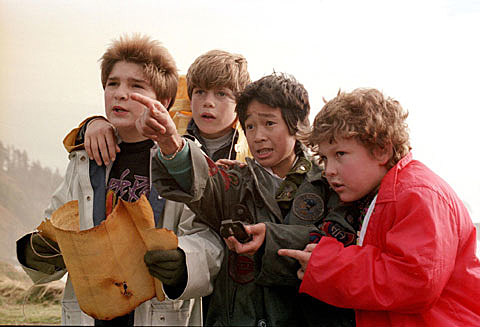 Amazon.com, whose not-very-fun-sounding work environment was put under the microscope in that NY Times article a few weeks ago,  sells a lot of vinyl and are gettting into the business of exclusive titles. What's up first? Five '80s soundtracks: Goonies (30th Anniversary Edition), Top Gun, Dirty Dancing, Footloose, and Rocky IV (30th Anniversary Edition). Not much is known about these 2015 editions (like the source of the audio), but they'll be out October 9 for $25 a pop. According to MovieWeb, the records will be released on Amazon's own Amazon label, though the mostly-bare listings themselves list "Legacy" as the label.

If you don't want to wait till October, you can always just buy used copies of the original vinyl which is plentiful and cheap. (Goonies, Top Gun, Dirty Dancing, Footloose, Rocky IV.) With record pressing plants backed up and behind on releases, some are wondering why we need these reissues at all. A lot more interesting would be if they, say, released a soundtrack to Ferris Beuller's Day Off which was supposed to be released when the film came out in 1986 but then never did.