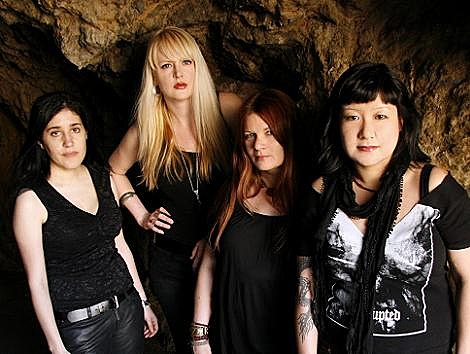 Neurosis. Weakling. Noothgrush. Graves At Sea. Saros. Swans. Ludicra. Members of some seriously heavy bands have contributed to the Bay Area beast known as Amber Asylum. But towering stacks and bowel-shaking riffs aren't at the root of their heaviness, it's a much deeper source that draws from chamber music, post-rock, dark ambient, and the avant-garde.

Amber Asylum is the brainchild of Kris T. Force, multi-instrumentalist, vocalist, and collaborator with Neurosis, Matmos, Swans, and many many others. Over the years, AA has featured a revolving door of collaborators (including Steve Von Till and John Cobbett). For their new album, Force collaborated with Leila Abdul-Rauf (Saros, Bastard Noise), Jackie-Perez Gratz (Giant Squid, Grayceon), Eric Wood (Bastard Noise), and Chiyo Nukaga (Noothgrush, Graves at Sea), in addition to guests Sigrid Sheie (Hammers of Misfortune) and Jarboe. Amber Asylum's new album, Bitter River, is out now at the Profound Lore site (and coupled with the new Saros for a discount), but the band has dropped off a pair of tracks from their upcoming LP for download above.

With a rap sheet like that, you can bet that Amber Asylum's collaborators are busy with their other projects.

Giant Squid and Grayceon are hitting the eastern shores this August, and have lined up a date at Union Pool on August 12th with the mighty Hull (who recently dropped Sole Lord). Full tour dates are below. Giant Squid's new Matt Bayles (Minus The Bear, Mastodon) produced effort, The Ichthyologist, is out now independently. Pick it up through the band, and download one of those tracks above.

As we discussed back in November, Saros recently released their new album Acrid Plains via Profound Lore (get that here) and have a few dates lined up of the west coast including one with Yob (who released a new song and has a record coming). Full tour dates are below, download "Reversion" from Acrid Plains above.