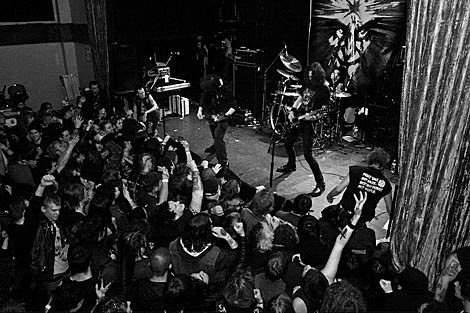 Crust legends Amebix have called it quits... or have they? Founding member Rob "The Baron" posted the following message on Facebook:

"To my deep regret, AMEBIX has now come to a point where we can no longer continue as a band. We have spent the past five years engaged in a process of resurrecting this group from the ashes and feel very proud of what we have managed to achieve in that time, both in the live performances and also in the album that resulted from this extraordinary time. 'Sonic Mass' is a worthy successor to all of our earlier work, bringing a lot of our original impetus and ideas into clear focus....AMEBIX was and is the creation and brainchild of both myself and my brother Stig. With either of us absent, it is no longer AMEBIX.

The Baron goes on to say that further announcements regarding a "new incarnation of the Amebix legacy" with last drummer Roy Mayorga will appear on the official website.

Reportedly The Baron and Stig (also a founding member) had discussed the split, though nothing official had been planned yet. In a Facebook post, Stig proclaimed "WOW FIRST I'VE HEARD OF THIS."

No word as to where this will lead, though hopefully not in two versions of Amebix kicking around ala Sham 69.