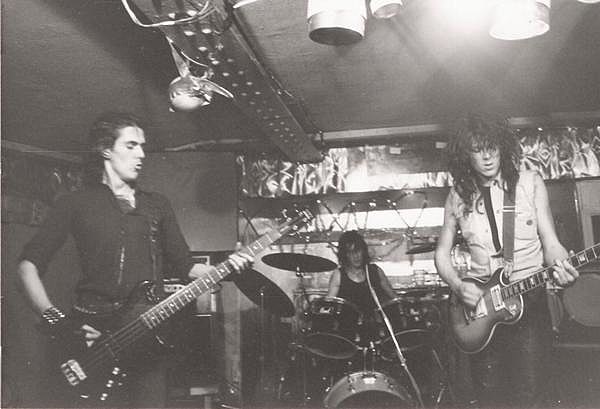 The godfathers of Crust punk, Amebix, have announced their reformation. Sprouting from a retrospective DVD in the works for Jello Biafra's Alternative Tentacles, Rob "The Baron" Miller entered the following myspace blog entry entitled "Oh Dear....eating my words"

"...got the idea to contact Stig about maybe jamming a couple of songs to see how it felt. I also had made contact with Roy Mayorga of Stone Sour, Sepultura, etc... (Spider has tinitus and is no longer able to play)..... It was absolutely fucking MAD! (The songs sounded) ten times better than the original versions, tighter, heavier, stronger."

From the world's most accurate online encyclopedia, a little history:

Amebix, formed in England in 1978 as "The Band with No Name", were a band that many consider to have started the sub genre crust punk. Their music, heavily influenced by Motörhead (and to a lesser extent Lemmy-era Hawkwind), Black Sabbath, Venom, and early Killing Joke, combined with an ethos and worldview akin to Crass, represented their non-traditional lifestyles.

Their music blended hardcore punk and heavy metal into a form of early thrash metal. They were the forerunners of crust punk and a thrash metal pioneer. Such notable bands as Sepultura, Neurosis, Napalm Death, and Deviated Instinct have paid homage to the band.

Amebix have also announced that their 1987 album "Monolith" will be made available via "Sliding Scale Download" (read: In Rainbows/Niggy Tardust style) via Moshpit Tragedy.

Killing Joke also announced their reformation. Check out some Amebix (and Killing Joke-related) videos below...