American Football tracking their LP back in the day (via Facebook) 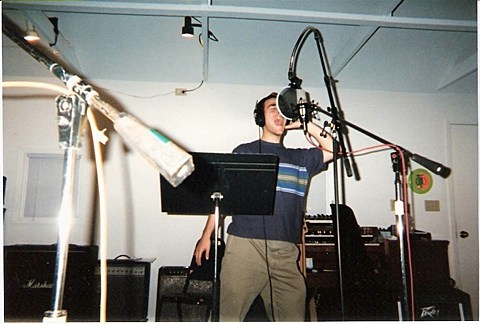 American Football (the reunited emo band, not to be confused with Everywhere Else Football which much of the world is currently freaking out about) already announced four reunion dates including three sold-out Webster Hall shows in NYC and spot at Champaign, IL's Pygmalion Festival (tickets). And it looks like their reunion tour will continue to grow because two California shows have just been added too. An updated list of their dates can be found below.

Meanwhile, American Football singer Mike Kinsella will be in NYC sooner as the drummer on the Owls reunion tour, which hits Bowery Ballroom on July 11 with Hop Along and Glocca Morra (tickets). Mikes's brother Tim (who fronts Owls) will also get to New York a day ahead of that show to support his new novel, Let Go and Go On and On, with a night of readings on July 10 at WORD Bookstore in Brooklyn (126 Franklin St). That event begins at 7 PM. Here's more on the book:

In Let Go and Go On and On the story of obscure actress Laurie Bird is told in a second-person narrative, blurring what little is known of her actual biography with her roles as a drifter in Two Lane Blacktop, a champion's wife in Cockfighter, and an aging rock star's Hollywood girlfriend in Annie Hall.

Laurie Bird's story unravels in a bathtub where she commits suicide at the age of 26, and Let Go and Go On and On draws on this very American story to explore our endless fascination with the Hollywood machine and the weirdness that is celebrity culture.

Owls, as well as Tim's other band Joan of Arc and Tim/Mike's other other band Cap'n Jazz, all had releases on Jade Tree which is planning to put out records "consistently again" and recently uploaded their entire catalog to bandcamp. So head there if you need some catchup on Cap'n Jazz, Owls or Joan of Arc, or maybe some non-Kinsella stuff like Denali.

And lastly, as discussed, right before the American Football shows at Webster Hall, Mike's solo project Owen plays The Studio at Webster Hall (10/9). Tickets for that show are still available.