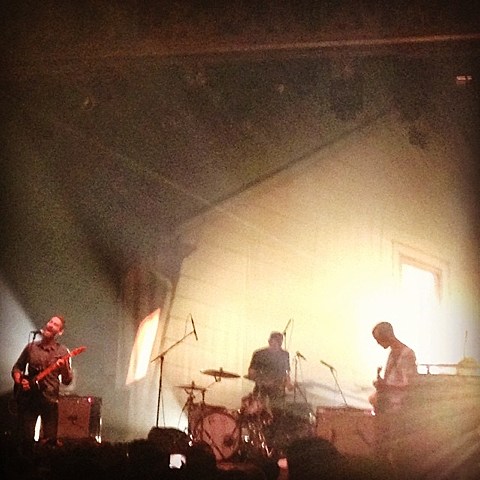 Emo legends American Football are finally back, playing their first shows in 15 years, and last night (10/10) they began their three-night run at NYC's Webster Hall. Singer Mike Kinsella has already visited NYC for two great shows here this year, first sitting behind the kit on the Owls reunion tour, and then again as Owen one night prior to American Football. But there was a different aura to the American Football show. The members were cast as silhouettes against a backdrop of the house from their album cover, and while the crowd was ready to sing along to all their teenage feelings, atmospherics won out.

Rather than opening the show with a fan favorite, they eased into their set, beginning with the instrumental "Five Silent Miles" from their EP, and those types of instrumental passages resurfaced several times throughout the set. When you're dealing with a reunion set like The Replacements, the crowd is happy to belt out all the words and relive memories, but this was more like the My Bloody Valentine reunion. American Football had to win over the crowd with technicality and zoned-out-inducing instrumentation, and they did just that. Drummer Steve Lamos brought the melancholic trumpets (which got major cheers from the crowd), and the guitars were as sparkly clean and noodling as the record. There were a couple moments where the band seemed to slip up, but that's hard to complain about when they were basically learning some of these parts for the first time, and perfection is never what made the Kinsella bands great in the first place.

Setlist-wise, it was literally impossible to complain. They played every song from their album and their EP (their only two releases), plus "The 7's" which appeared in the bonus material of this year's reissue. Of course that means it was a 13-song set and over in about an hour, but it was one anyone in 2014 was lucky to see.

S. Carey opened last night. The run continues tonight (10/11) with Into It. Over It. and concludes Sunday (10/12) with Matt Pond. Like last night, the next two are sold out.

Full setlist and a video of them playing "Never Meant" last night, below...

American Football @ Webster Hall - 10/10/14 Setlist:
Five Silent Miles
The One With the Tambourine
Letters and Packages
Honestly?
For Sure
I'll See You When We're Both Not So Emotional
You Know I Should Be Leaving Soon
But the Regrets Are Killing Me
The 7's
Never Meant

Encore:
The Summer Ends
Stay Home
The One With the Wurlitzer