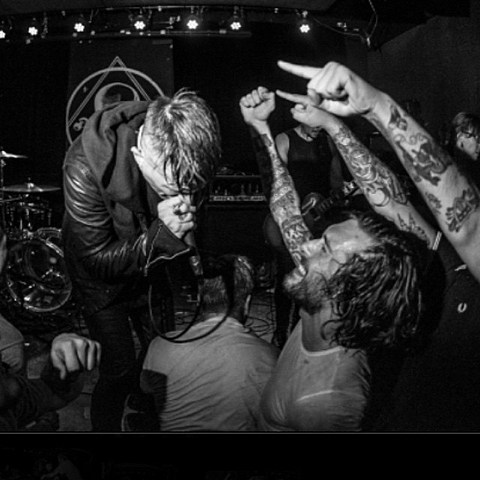 Following American Nightmare's set at Asbury Park's Skate & Surf festival on Saturday (pictures here), the hardcore greats announced a last-minute intimate late show for Brooklyn's Saint Vitus on Sunday night (5/17). It sold out very quickly (naturally), and the place was as PACKED as I'd ever seen it. And the fact that it was such a late show on a Sunday didn't stop anyone from making it a totally wild night.

American Nightmare went on some time close to midnight, following an opening set by Brooklyn locals Sick Feeling (ex-Ink & Dagger), and there was hardly a moment of downtime in their 45 minute-ish set. At least half the crowd was just one constantly-moving sea of people, and I don't think more than 20 seconds passed in any song without a stage diver. The band is pure fury -- you certainly wouldn't guess they haven't made a record in 12 years -- and Wes Eisold is a no-bullshit kind of frontman. He never smiles, no jokes in between songs, no preaches, no encouraging the crowd to dance a certain way or sing a certain song. Not that he'd have to -- basically the whole front half of that room was screaming every song back in his face the entire time. And AN were giving that crowd plenty to scream to. "AM/PM," "Crime Scene," "Farewell," "Love American," "Hearts" and plenty more favorites were played in their all-killer set.

UPDATE: unARTig uploaded a video of the full set. Watch that, with their setlist and a few more pics, below...

Life update: I saw so many good friends and good bands this weekend, and I love this city. Last night I saw AN in a tiny venue right after I got to see Burn 😍 this was prior to @msbrookiecookie being a butt / my favorite human and pushing me into the madness. Glad to know I'm not actually too old for this because I somehow made it out alive.

American Nightmare last night. So good. Sorry to anyone I kicked in the head.🙊 #americannightmare #an #brooklyn #stvitus

AMERICAN NIGHTMARE AT SAINT VITUS - 5/17/15 SETLIST (via)
There's A Black Hole In The Shadow Of The Pru
Hearts
I've Shared Your Lips So Now They Sicken Me
Love American
(We Are)
AM/PM
Shoplifting In A Ghost Town
I Saved Latin
Postmark My Compass
Calculation Nation
Protest Song #00
Please Die!
Your Arsonist
Farewell
Crime Scene