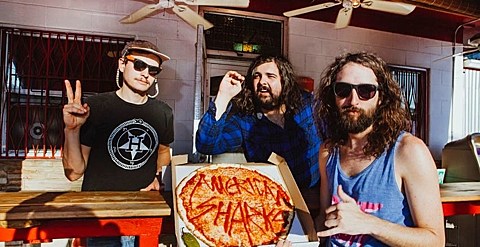 Austin stoner rockers American Sharks are in two-steps-forward / one-step-back mode. The band was slated to open for Godflesh this coming Saturday, but as we've mentioned a couple of times over the past week, Godflesh have postponed their tour until April. (But government shutdown that purportedly led to the postponement is over now, so that's good, right?)

On the bright side for American Sharks, they're playing tonight's Cake Shop CMJ showcase with Joanna Gruesome, Weird Womb, Dirty Fences, Nancy, and Tweens. They're also playing at Union Pool on 10/22, presumably to make up for the canceled 10/19 Godflesh date. Dirty Fences and Nancy will also be on that bill, along with Hector's Pets. American Sharks are also hitting the road with Clutch and The Sword in November, and they've got a music video for "Overdrive" that pays pitch-perfect tribute to the cult classic Repo Man. I guess that's more like four steps forward and one step back.

Check out the "Overdrive" video and their upcoming dates with Clutch and the Sword below...