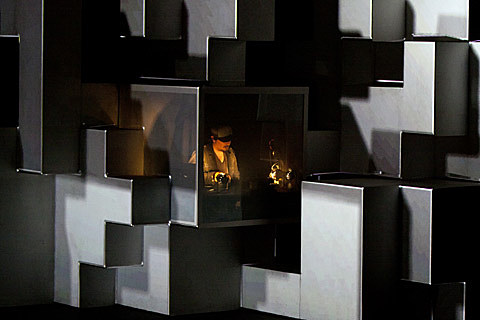 [The] 'Amon Tobin' [boxset] is a strictly limited edition release and will come in the form of a beautiful high quality bolt fastened mechanical 'press'. Packed inside are 6 x 10" vinyl, 7 x CD, 2 x DVD and several posters. Most of the material is unreleased, almost none of it has ever been available on a physical format before. It includes new music, unreleased dub plates and a wealth of archive material, Amon Tobin's earliest audio experiments (never been played in public before), film and television score work, unreleased score work, deleted bootlegs, 'ISAM: Live' show DVD, 'ISAM: Live' audio album, remixes, cover versions and re-interpretations of the ISAM album, remixes Amon has produced for others, a recording of the (November 2010) Royal Albert Hall orchestrations of Amon Tobin and more!

As detailed above, Amon Tobin is releasing a limited edition career spanning boxset of rarities and material from the live 'ISAM" shows, due out on May 21 via Ninja Tune. You can preorder at his website.

Amon Tobin is scheduled to play Coachella this April, and after that he'll kick off 'a new look ISAM Live' with some European shows in the spring and a full North American tour in September and October. That tour hits the NYC area on September 13 at Wellmont Theatre in Montclair, NJ and September 14 at Hammerstein Ballroom. Artist presale tickets (which include a purchase of the boxset) for the entire tour is on sale now. Tickets for the Wellmont show go on sale Friday, 3/9 at noon. Ticketmaster tickets for the Hammerstein show are not available yet.

Check out the promo video for the boxset and ISAM Live 2012, along with all dates below...