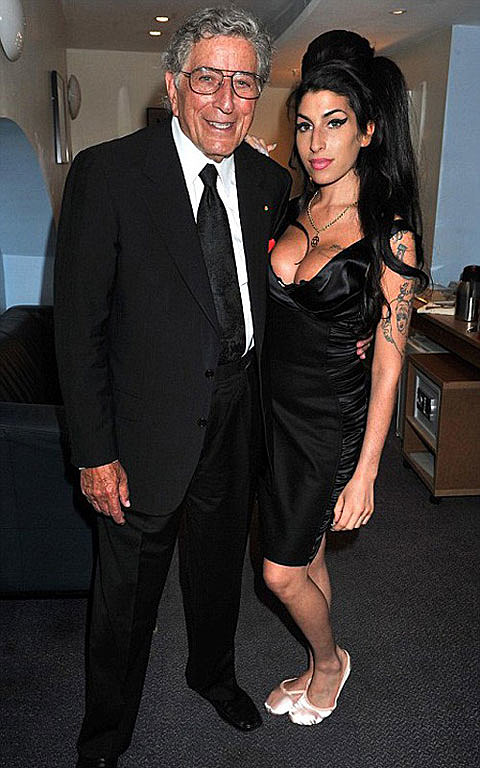 The great Tony Bennett has a new album of Duets, titled Duets II, coming out on September 20th. The 17-track CD features boring names like Michael Buble, John Mayer and Sheryl Crow, and some interesing names like Willie Nelson and Lady Gaga, but most notably includes a duet with Amy Winehouse who unfortunately never had the chance to realize her full potential due to a sad past few years and her untimely death today (7/23/2011).

In a video interview (that you can watch HERE), Tony says "Amy Winehouse was my favorite to perform with on the whole album." He compares her to Dina Washington and says she had the butterflies and nervousness that all the greats like Frank Sinatra and Duke Ellington had. He talks about how they clicked and says he thought she really loved to perform (though you might not know it from recent live videos) (too much butterfly medicine). RIP Amy.

Winehouse hasn't released an album since 2006 hit "Back to Black". The album won five of six Grammys it was nominted for including Record of the Year (and Best New Artist). She also won at the Brits that year. She was nominated for the UK's Mercury Prize twice. In 2004 "Frank" lost to Franz Ferdinand. In 2006 she lost to the Klaxons (check out who was nominated this year). Whether or not Amy has any other unreleased material remains to be seen, though there were rumors that she also recently recorded a track with Cee Lo Green.

Speaking of duets, in Amy Winehouse's too-short career she also performed with Mick Jagger, Mos Def, Mark Ronson, sort of Ghostface, and probably others I missed.

The full tracklist and cover art for Tony's "Duets II", and a video of Amy performing with The Rolling Stones, below...

Duets II tracklist
ANDREA BOCELLI Stranger In Paradise
MICHAEL BUBLÉ Don't Get Around Much Anymore
MARIAH CAREY When Do The Bells Ring For Me
NATALIE COLE Watch What Happens
SHERYL CROW The Girl I Love
ARETHA FRANKLIN How Do You Keep The Music Playing
JOSH GROBAN This Is All I Ask
FAITH HILL The Way You Look Tonight
NORAH JONES Speak Low
LADY GAGA The Lady Is A Tramp
K. D. LANG Blue Velvet
JOHN MAYER One For My Baby
WILLIE NELSON On The Sunny Side Of The Street
QUEEN LATIFAH Who Can I Turn To
ALEJANDRO SANZ Yesterday I Heard The Rain
CARRIE UNDERWOOD It Had To Be You
AMY WINEHOUSE Body And Soul