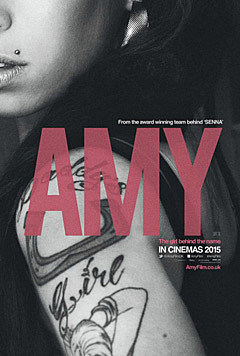 It's much to the credit of Amy, a new documentary about Winehouse from Senna director Asif Kapadia, that the film restores a sense of Winehouse's humanity. It wasn't some caricature of excess who died, but a woman of unique gifts, with people who cared about her and a private life the public didn't entirely know. Nor was her death necessarily unavoidable. Part of what makes Amy so sad are the moments that point to paths not taken and choices not made--often by those around Winehouse--that might have changed the course of her life, and that could have prevented her from joining what Kurt Cobain's mother called "that stupid club" when her son died at 27. Kapadia achieves this, as with all of the film's effects, subtly, and without offering any direct commentary. Amy weaves together home movies, TV appearances, and paparazzi footage, bringing in new interviews with key players but keeping them off-screen. No one here is allowed to take over the narrative, and on more than one occasion, their accounts conflict or stand in contrast to what archival footage shows. - [The Dissolve]

In other news, Winehouse is the subject of a cover story in this week's issue of Billboard in which they reveal that the singer had started work on her third album right before she died in 2011. The demos, however, will never see the light of day as they were purposely destroyed by Universal Music UK CEO David Joseph, who told Billboard, "It was a moral thing. Taking a stem or a vocal is not ­something that would ever happen on my watch. It now can't happen on anyone else's."

Watch the trailer for Amy below.