Here are some highlights from the article.... 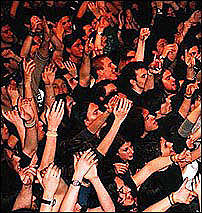 Bowery Presents Capacities: "250-capacity Mercury to the 575-person Bowery to Webster Hall, at 1,400"

Gramercy Theater: "Live Nation also plans to start presenting concerts in January at the former Gramercy Theater on East 23rd Street, which will hold about 600." (this has been a rumor for a while)

Live Nation booking new Luna Lounge: "reopening by the end of the year in Williamsburg at 300 to 350 capacity, more than double its former size on Ludlow Street, where it closed last year."

Bowery Presents takes over Northsix: "It will be renovated, with upstairs balconies added, and is to open in the spring as the Music Hall of Williamsburg." (a few weeks ago someone tipped us to this in the comments, but Bowery Presents and Northsix both denied it when I contacted them)

The Box: "Another new Lower East Side club on the horizon is the Box, a 5,000-square-foot room on Christie Street whose owner, Simon Hammerstein — a grandson of Oscar — said he intended to open in the next two months with theater and music performances."

read the rest @ The NY Times.