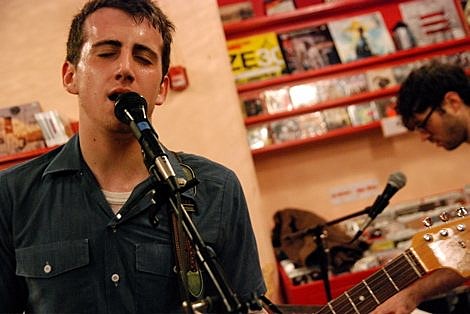 Musically speaking, 2009 was probably the biggest year for Staten Island since the heyday of the Wu-Tang Clan. In addition to The Antlers, we also got Cymbals Eat Guitars' Why There Are Mountains which got them a lot of comparisons to Built to Spill and Modest Mouse. It also garnered them Best New Music on Pitchfork back in March. Not bad for a self-released album. Look for CEG on tour next spring with Bear in Heaven -- tour dates are also below.

You released a record in 2009. How'd that go?
Great! We feel very fortunate to have released our debut record to such a big response and it has certainly led to some never in our wildest dreams moments for us.

What was your most memorable musical moment of 2009?
Opening for the Flaming Lips in London.

What about non-musical moment?
We had paella in Barcelona a few days ago that was out of this world.

Favorite place to play in NYC?
Music Hall of Williamsburg

What were your favorite albums of 2009?
Grizzly Bear - Veckatimest
Phoenix - Wolfgang Amadeus Phoenix
Dirty Projectors - Bitte Orca
Wilco - Wilco (the Album)
The Pains of Being Pure at Heart - s/t
Sonic Youth - The Eternal

What was the best show you saw in 2009?
We had a chance to watch Wilco from backstage in Germany at the Rolling Stone Weekender festival in November. It was probably not the most off-the-wall, amazing Wilco show but being right up close was special. Pat Sansone is a human encyclopedia of rock moves.

Favorite Michael Jackson song?
"Will You Be There." There are like four ascending key changes!

What is the proper way to incorporate "Meh" into your band name?
Cymbals Eat Mehtars

Plans/predictions for 2010?
Lots and lots of touring. Were going back to Europe in February, then a March/April US tour with Bear in Heaven that were particularly excited about. And hopefully a new record in the can by this time next year.