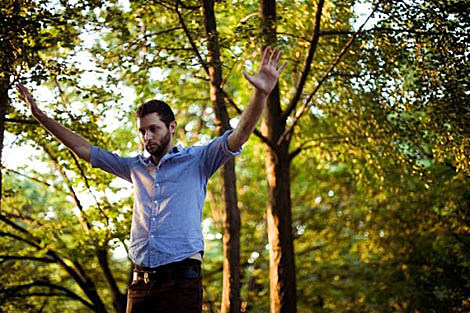 Normally, this is where a little bio of the band would go, but Todd pretty much does that himself in answering the first question of our end-of-year survey. We should note that his band ARMS open for Passion Pit at Terminal 5 on January 8 (sold out). So without further ado:

You released a record in 2009. How'd that go?
I released two, actually - one, Harlem Shakes' big debut Technicolor Health, was met with a few good reviews, a handful of okay reviews, one particularly terrible review, and a pile of excited kids who just loved it and didn't really care about reviews. We went on two large tours, sold out two large New York venues, signed to a major label in the UK, and then broke up. So that's how that went. The other record, my solo album as ARMS, called Kids Aflame, just came out in October and has been (mercifully, moderately) well-received. I got a new band together, we're sounding better and better every day, new songs are coming slowly but surely. The future looks good.

Favorite Singles/Songs?
There's a song on the new Kings of Convenience record called "Boat Behind" that keeps popping into my head. I also really liked the Alec Ounsworth solo song "This Is Not My Home (After Bruegel)," actually - his album's kind of soulful and weird. And for a while I was a little nuts about Grizzly Bear's "Two Weeks", for obvious reasons.

What was the best show you saw in 2009?
Dirty Projectors at SXSW -- changed my whole perspective on shit.

What was your most memorable musical moment of 2009?
Finding out that the only bands from France that are popular in America - Daft Punk, Phoenix, Air - have a secret past in which they all played together. It's on wikipedia, it's kind of terrifying. They won't let any other French bands get famous here! Phoenix will crush them with their exquisite tightness.

What about non-musical moment?
Spent a week in Istanbul, wandering around by myself. That was an experience.

Best new NYC-area band?
Brent Katz, drummer from Harlem Shakes, just finished an album under the name Thunder & Lightning called "Kangaroo Court." That's my actual favorite album of the year, but it isn't out on any label yet and he technically doesn't have a band to play his songs. It's an unbelievable piece of art, though. Profoundly funny, catchy, moving stuff.

What's the best and worst thing about being in a band in NYC in 2009?
Best Thing: So many good bands in New York now - for real this time.

Worst Thing: Every time I walk through the west village a chill runs down my spine. It's like an elephant graveyard, except instead of elephants it's shitty bands.

Favorite Michael Jackson song?
"Smooth Criminal." Is it bad that the Alien Ant Farm version was the first time i heard that song? I wasn't a very cool kid.

What is the proper way to incorporate "Meh" into your band name?
ARMehS / M(ARMS)eh. Your call, Brooklyn Vegan.

Shitgaze, Glo-fi or Dark Wave?
I barely even know her.

Plans/predictions for 2010?
No two ways about it, I'm switching to grown-up shoes.