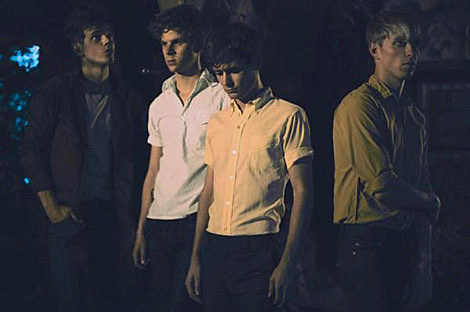 Making their debut during this year's NYC Popfest back in May, The Drums appeared fully form out of the gate and made an instant splash thanks to their insanely catchy '80s-inspired songs (download two above) and tambourine-crazy, bouncing-off-the-walls live show. The band took a break from shows but return in 2010 to play Bowery Ballroom on January 13 before heading off on a European tour. Frontman Jonathan Pierce, guitarist Jacob Graham, drummer Connor Hanwick all contributed to our year-end questionnaire...

Jacob: I think it went very well. It was actually just an EP, but who's counting?!

Adam: We released an EP called "Summertime" sort of late in the Fall, which seems wrong but felt right.

Connor: Probably the time Jacob almost killed me by blindly throwing his tambourine at a show of ours.

Jacob: Meeting and recording with Mike Joyce (The Smiths).

Jon: Dancing and drunk with all my closest friends in my bedroom with the lights off. We just played Bridal Shop's Coming Real a thousand times. It really was perfect.

Connor: This summer as a whole, although that was comprised of a bunch of "music related" moments.

Jacob: I don't know that there were any non-musical moments for me in 2009.

Jon: My dog bit my closest friend, and it made me cry.

Connor: The Beacon. Or Don Hills

Adam: I really enjoyed our residency shows in June at the Annex.

Jon: Bowery. But most fond memory was Cake Shop.

Jon: The Hairs -- half Knight School, half Pains. They have this song called "Duh x 12." Perfect pop!

Jacob: Knight School for sure. The Pains are pretty good too...

Connor: The best thing. Being in a place where people are constantly searching out new music. And everyone around the world still looks to NY as the foremost authority on good, new, and interesting music. The worst thing -- See above

Jacob: It rained a lot in the summer. Always on days when we had shows. Best thing would be the food.

Jacob: My Maudlin Career by Camera Obscura and Our Temperance Movement by Cats on Fire

Jon: I think my fav two albums of the year were A Place To Bury Strangers - Exploding Head and JJ's debut. Both have some great songs.

Jacob: "French Navy" by Camera Obscura. What a song! It's just crazy. And then a bunch of songs that we discovered that were released a long time ago. "17 Berlin" by My Favorite. Also very crazy.

Adam: The Raveonettes - "Bang" and "Wine"

Connor: The Raveonettes at Webster Hall. Francis and The Lights at Zebulon

Jacob: Definitely Cats on Fire at the NYC Pop Fest. That was actually the best show I've ever seen in my whole life.

Jon: Cat's on Fire at Don Hills. Sorta took us all by storm.

Jon: "Don't Stop Till You Get Enough"

What is the proper way to incorporate "meh" into your band name?

Jacob: Probably Glo-fi, but I don't think I understand the question. I just think that sounds the nicest.

Jon: Touring and releasing the record. I hope to fall in love.

Jacob: Just to keep doing what we're doin. Work hard and play harder. ...that sounds stupid. I meant play as in "playing shows" which is actually work. So just lots of working. Though shows can be fun, so I guess the lines blur a little. I want to shine a bright light into the darkness.