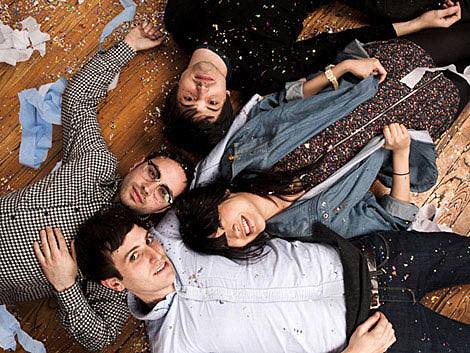 It's not entirely uncommon, especially these days, for a band to go from playing Cake Shop to headlining Webster Hall in little over a year, but one of the amazing surprises of 2009 is that it happened to The Pains of Being Pure at Heart. Made entirely of genuine indie obsessives who, when not on tour are at other people's shows, the Pains moved beyond the cardigan crowd to what you could almost call... mainstream success? It doesn't hurt that their self-titled debut was chock-full of irresistible pop songs, three of which were actual singles (all downloadable at the top of this post), and the rest could've been. The band rest up until February when they tour Japan, Australia and New Zealand -- tour dates are at the bottom of this post. Singer Kip Berman answered our year-end in questionnaire...

The Pains of Being Pure at Heart had quite a year -- tired yet?

No, it's more exciting than anything. Maybe it's just adrenaline, but I feel like this whole year has been such a rush.

Did you ever think you'd end the year headlining Webster Hall? Does that blow your mind?

It was way beyond anything we could have possibly expected-- not just the Webster show, but this entire year. We don't take it lightly and we've worked really hard to improve and be worthy of all these opportunities. So many of the bands that were influential to us growing up never got a chance to do the sorts of things we've gotten to do, so we try to be as appreciative as possible and keep striving to improve.

I think it was the experience of meeting so many other bands and people that meant so much to me. Whether it was stalking Stephen Pastel at his record shop in Glasgow, chatting with Amelia Fletcher (Tallulah Gosh, Heavenly) back stage in London, being interviewed by Jarvis Cocker and coming off more than a bit tongue tied, getting big hugs from Pink Eyes from F*cked Up on several occasions, eating curry with Rocker from The Flatmates + Rosehips (also on several occassions), getting more than a little wasted with The Vivian Girls in a strange park in Italy, drinking 3% beer with Titus Andronicus in (possibly even stranger) Provo, Utah -- there's just so much. Long before we were in a band, we were just nerdy music fans-- getting to dork out with past or present bands we admire is so awesome.

It seems like even the non-musical moments are in some way made possible because of music. Meeting so many really awesome people or traveling to places we'd never ever get to go to-- It's just all something we feel so appreciative of.

Cake Shop has been wonderful to us, and Andy Bodor's new club Bruar Falls is really good too.

I will skilfully circumvent the "new" and "best" part of that question with a few of the bands I always try to go see when they play: Zaza, Depreciation Guild, Knight School, Crystal Stilts, Frankie and The Outs, Diehard, German Measles, My Teenage Stride, Metric Mile, Dream Diary, Titus Andronicus, Vivian Girls, Dinowalrus, caUSE co-MOTION (r.i.p), Woods...

New York is awesome and we really appreciate getting to make music here and be part of this city's incredible musical tradition, as well as getting to experience all the amazing current bands. I realize it is expensive/difficult to find a place to practice, but there's something really special about getting to live and make music here. It's a place where no matter what sort of music you're into, you can find other people who are into it too.

This list is definitely not complete or ordered, and apologies for the inclusion of some EPs, but:

Leonard Cohen at the Beacon Theatre. I went with my mom, as he's perhaps her favorite musician of all time. It was so far beyond the sorts of things I normally think are awesome. It felt like watching something great, something historic. I get uneasy about being overly reverent about things that are classic, but it was so moving, so beautiful and so wonderful to be able to experience that-- especially with my mom. It's something I'll never forget.

Earlier this year we were supposed to do a split with Titus Andronicus where we covered each other's songs, but we didn't have time to record the song of theirs. But they recorded one of ours and it's so much better than our version. It made me feel so happy to know that something we made was transformed into something more awesome by a band we all really admire. So yeah, Titus Andronicus rules and I'm looking forward to a new record from them in 2010 along with Crystal Stilts, Veronica Falls and Blanche Hudson Weekend (ex-Manhattan Love Suicides). Also, I'm really looking forward to the new Depreciation Guild record, which I've heard some early mixes for-- and I think it's going to be really awesome.