Sisters @ Above the Auto Parts Store (more by Leia Jospe) 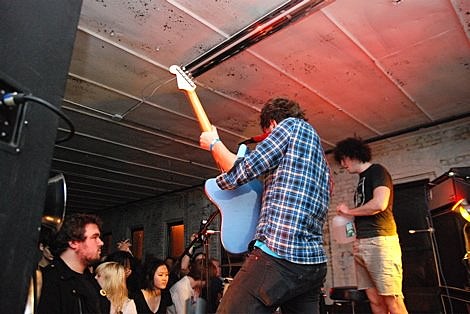 While they have yet to release an album, Brooklyn duo Sisters have been busy releasing split 7"s with JEFF: the Brotherhood and helping run Death by Audio the venue. Death by Audio, the label, will release their full-length debut in the spring of 2010. The guys don't have any local shows till February (when they'll open for Atlas Sound and Neon Indian) but they play Toronto on January 15 with Little Girls. Singer-guitarist Aaron Pfannnebecker, and drummer/keyboardist Matt Conboy sum up their 2009, and explain why two people need so much volume...

You spent 2009 working on your debut album. How's that coming along?

Aaron: Yeah, we started in September. We are starting to mix it this week actually. I am really psyched. It's sounding great.

Matt: It's coming along great. We're working with Jeremy Scott at The Civil Defense. I think some times I get impatient, and want the thing finished sooner, but I know that it will be worth the wait to make it exactly how we want it.

Sisters use more amps than the average person might expect from two people. What's with that?

Aaron: I send loops sometimes to one stack and sometimes play out of both. We also babysit, so sometimes kids can hang out in them if we need to play a show.

Matt: The short answer is that I can't really play drums quietly, so Aaron's guitar needs to be loud enough for me to hear it. We also try to fill out a wide spectrum of sound, but having only two members means compensating with amps etc. Plus I think we sound a lot better now than when we just had one guitar amp.

Aaron: Making up music in my bedroom with some new toys and making music with Matt.

Matt: New years with my girlfriend in Lake Taho, CA.

We both really have fun at the Dead Herring.

Aaron: I guess, she is not so much new, but new to me. I really like Noveller a lot.

Matt: It seems like NYC is more saturated with venues and bands. This is great because there are lots of awesome people doing inspiring things (both playing music and running spaces). But it's also frustrating because you often have to wade through a lot of mediocrity and crap to find them.

Aaron: The best is all the great bands and venues to play. The worst is I guess the uptight seriousness that comes with a place like this.

Matt: Black Pus and Jeff: The Brotherhood at DBA in April.

Aaron: Jeff: The Brotherhood at Mercury Lounge was awesome, and I had a lot of fun at Deerhunter show earlier in the year.

Aaron: "Human Nature." It's the best.

Matt: "Shes Out Of My Life"

What is the proper way to incorporate "Meh" into your band name?

Aaron: I like the sound of a Dark Wave.

Matt: Some things will be worse, others will be better. I am excited.

Aaron: It looks like it is going to be busy with music. Our album will be out in the Spring and then shows. I can't wait, and it will be weird to write 2010.