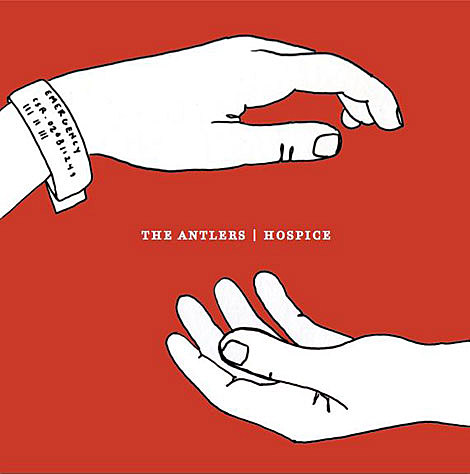 After a decade in which private lives basically became public domain-- think confessional emo, YouTube, reality TV, and social networking updates-- you would think that we'd have become inured to the private pain of semi-autobiographical songwriting. But as the debut album by Peter Silberman's former solo project (it's now a trio) proves, with the right blend of earnest, whispery vocals, delicate, gauzy melodies, and strangely smothering scratchy effects, a desperately delivered concept album about personal loss still has the power to emotionally destroy listeners. Hospice, as its name implies, is not an easy album to take-- the haunting songs' plainspoken prose tells of mental illness, abortion, cancer, and death-- but couched in soaring anthems and swathed in layers of ambient noise, its heartbreaking stories are easy to love. --Rebecca Raber, Pitchfork.com

Peter Silberman of The Antlers answered our end-of-year questionnaire...

Better than I could have EVER expected. My head is spinning every day.

There's been so many of them this year. My go-to moment of insanity is getting the call to fill in for Cymbals opening for The Walkmen & Beach House at our first meeting with Frenchkiss. This call happened mere hours before the show. That felt like the beginning of everything changing. The Bowery show the other night might be tied with that memory.

Any moment spent with my childhood dog.

Sharon Van Etten & Holly Miranda. I love them both to death.

New York is the best place to come home from when you return from tour. But when things arent working out musically, its hell here.

Fuck Buttons - Tarot Sport, Sharon Van Etten - Because I Was In Love, Dirty Projectors - Bitte Orca, many others Im forgetting.

Anything from the Moderat record.

Low in Madison, WI. They did some serious damage to me that night.

The part of the Black or White video where Macaulay Culkin raps over somebody elses voice.

What is the proper way to incorporate "Meh" into your band name?

Ive given up trying to predict anything. We're going to start recording after the new year, and going to finish some remixes. Then, we're going to resume touring forever.

The Antlers have a show coming up at BAM and a tour with the Editors.