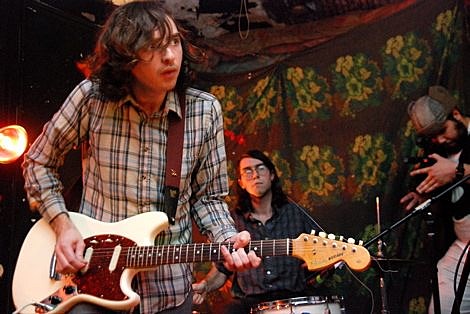 So we asked a load of NYC-area bands to tell us how their 2009 went, via a handy questionnaire...

New Jersey's Real Estate were one of the breakout bands of the year, putting out a slew of records on influential labels (Woodsist, Underwater Peoples, Mexican Summer). They also typified the dreamy "Beach Sound" that was definitely one of this year's more prominent trends. And if you haven't heard their debut album, you definitely should. You can download "Beach Comber" at the top of this post. Real Estate don't have any NYC dates scheduled, but they will be heading off on an extensive European tour in early 2010 -- so look out, Prague! Real Estate frontman Martin Courtney answered the questions below...

You released a whole bunch records in 2009. How did that go? Why so many?
It just sort of happened that way, wasn't really a planned out thing. It's definitely been a dream come true seeing our music get released on vinyl.

What were your favorite albums of 2009?
I really liked, in no particular order:
Bill Callahan - Sometimes I Wish We Were an Eagle
The Beets - Spit On The Face Of People Who Don't Want To Be Cool
Woods - Songs of Shame
Julian Lynch - Orange You Glad
Yo La Tengo - Popular Songs
Kurt Vile - Childish Prodigy
Girls - Album

What was the best show you saw in 2009?
Girls at monster island basement, or the Woodsist showcase at Ms. Beas during SXSW (Kurt Vile/ Violators set in particular).

What was your most memorable musical moment of 2009?
Too many to pick one. Woodsist/ Captured Tracks festival on the 4th of July, SXSW in general, the Todd P. Fort Tilden beach thing, playing at the Whitney w/ Titus. Those were some good times.

What about non-musical moment?
The last couple episodes of Curb Your Enthusiasm.

What's the best and worst thing about being in a band in NYC in 2009?
Best: Many, many opportunities to play and awesome bands to play with.
Worst: I don't know, CMJ was pretty hellish.

What is the proper way to incorporate "Meh" into your band name?
Real Estate? Meh.

Video of Real Estate throughout the year (all shot by Ray Concepcioñ) and those European tour dates are below:

The Loneliness of the Long Distance Runner: Real Estate [Part 3 of 14] from Ray Concepcioñ on Vimeo.