"I was like, 'this is a fucking heavy record'." 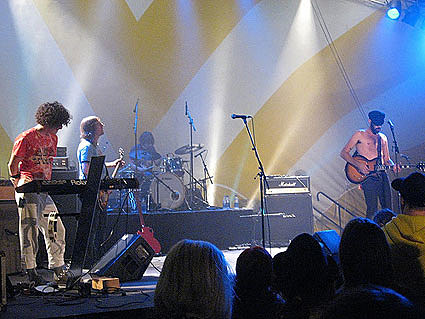 Sebastien Grainger, Canadian drummer and vocalist of the too short-lived DFA79 (not to be confused with France's Sebastien Tellier who just came through NYC last week), has emerged since the duo's split with an upcoming Saddle Creek record..

Best known for his contributions as singer and drummer for Canadian dance-punk duo Death From Above 1979, whose decadently catchy anthems took the world by storm with the release of their breakthrough record You're a Woman, I'm a Machine in 2004, Sebastien Grainger is soon to be even better known to the world as a singer and songwriter of sophisticated distinction via his new solo works. Fans of his prior music will likely be surprised by his new direction: delicately layered ruminations rich with energetic arrangements and deep melodic undercurrents. With his first full-length album Sebastien Grainger & The Mountains he further expands upon the well-received melodic endeavors of his digital EP American Names.

Sebastien's new work is a departure from both his previous outfit, and that of his former bandmate Jesse Keeler (one half of MSTRKRFT). Sebastien's band has played more than a handful of shows in the past eighteen months, including one recently at Osheaga in Montreal, That's where I spoke with him about the new sound, his old band, and the Canadian government promoting ejaculation..

The obvious first question would be the timeline. It's been a couple years [since DFA 1979], so what has occurred in that time?

Sebastien: The timeline is...broke up one band, hung out for awhile, didn't make music, started making music, bought a house with someone, built a studio with someone else on the same property, started trying to record songs I've been writing. That was about a year ago. Slightly before that...wait, I fucked the timeline up [laughs]. Went on tour with Bloc Party and Albert Hammond Jr. and that was my reason for building the band because I got offered that tour based on some demos and some stuff floating around. Put the band together, rehearsed for a couple months, did that tour. Started working on the record. That was a year ago. And then at some point in that process I took complete executive power of the record and made it completely about myself. I completed the record three weeks ago.

Is there a title?

I've heard the "American Names" single and the stuff streaming on your site. How did this sound come about?

It was probably a bunch of factors. I look at music as something that is already complete somewhere and I just got to wipe away the garbage off the top of it. Not in a way of reducing songs to their bare essentials but I just feel like that the song already exists. That sound just happened with me shedding...going through different techniques. I worked with a producer then I stopped working with a producer. I worked with a band then I worked alone. Just trying to figure it out. The real method is just being alone for hours on end in the middle of the night. And that's how it came about. The songs on the seven inch and the e.p are how I thought the record would sound like. I was like "these are my flagship songs. That's the sound of my music." But then I finished the record and noticed they were anomalies on the record.

How did you hook up with the Saddle Creek people?

They contacted my people through the internet. And they came to see some shows. We had been talking to a bunch of labels about who was going to put out the e.p and the full length. We set up our label in Canada sort of as way to set up guidelines like "I need to finish this by this time." Once that was in place, I had parameters I knew I had to finish this so I wound up working on it for another three years [laughs]. They [Saddle Creek] was really proactive about it. They were contacting us a lot. Out of all the labels we were talking to, they seemed more eager than the others because they were asking about it. They came to one of our shows in Austin and they said they really want to do it.

Saddle Creek has expanded in the last year to move beyond the perception people have about their music by signing you, Tokyo Police Club and Land of Talk. How do you feel to be a part of that wave?

I know the label, but I have never really followed the bands on their label. But I know how they work compared to other labels. It's a very friendly relationship.

The first time I heard "American Names," it was weird. I identify your voice with your DFA79 material and this sounds a lot different. Then there is the Does It Offend You, Yeah? song "Let's Make Out" that you sing on. That does borrow from the DFA79 sound, so it seems that even in the two or three years the band has been gone, you can't seem to escape it. Are you prepared for a potential uphill battle at first?

I'm not concerning myself with that. I feel like if I came out and took all of the momentum from Death From Above and transferred it directly into this project I would run into those kind of problems. I started by going out and playing shows. I've really been building a fanbase by going out all year and touring. Not that I was intentionally taking my time but the process was so long where I feel like I have an opportunity to find people who don't know Death From Above to be into the music. The record has artifacts of that style because that's who I am.

That's what surprised me when I finished the record. We went to master it and Nick, my bass player, and I were working on the sequence of the record and I was like, "this is a fucking heavy record." It's not Sepultura heavy but like way heavier than I thought it would be going in. When I started it, I was like "I'm gonna do a whole record of like 101 bpm slowish tunes with finger-picking and Wurlitzer" and then I was like, "that's not what happened." I surprised myself. There's enough of that stuff on the record to satisfy people but I'm not concerned with that.

Now do you and Jesse [Keeler, the other half of Death From Above] still talk to one another?

There's nothing to say.

Now is there a proper band put together for this record?

There is a band. It's a four piece. It's myself, Nick plays bass, Leon plays drums, and Andrew Scott plays keyboards and guitars and that's soft of the live band. We did a week of recording sessions a month before my initial record deadline because I had to get a bunch of songs done and it didn't feel right so I had to go back and rework a bunch of the stuff. I have trouble communicating my ideas to people. Especially in a communal context. I don't have a language to communicate those ideas.

It came together really easy. I needed a band because I was starting a tour. I already sort of knew who I wanted. Leon was a guy I went to high school with who's a few years younger then me. He had long, bleach blonde hair like a Kurt Cobain looking guy who played drums like Dave Grohl and I had played in other bands with him before. He actually, which is a little exclusive tidbit, at one point was supposed to be the drummer for Death From Above - with me as the singer and Jesse as the bassist. It lasted just one rehearsal and [me and Jesse] were like "I think we can do this alone." Not that we didn't like what he was doing, but we thought it would be easier to split any future profits 50/50 then splitting it 33.333%.

When is the album due out?

Are there any videos planned?

Yeah. In Canada, we have a really good grant system, but we already got rejected for one by my future wife to make a rotoscope animation video and it would have been fucking amazing. But they don't roll the dice. They put all of their money in the Nickleback basket. Big bands like that still get funding from the government. Death From Above filed for a grant, didn't get it for "Romantic Rights," which was probably our biggest song. Once you get rejected, you can't apply again with the same song. We applied for "Pull Out," which is our most objectionable song, like the most punk song about ejaculation. We got a grant for that because we were already known. We got money for the weirdest song. I applied for "American Names," which is a very poppy tune and they rejected it, so we'll see if anyone wants to give me actual money to make it.