The Journal of Popular Noise is a semi-annual audio magazine inspired by the traditions of pop music, printed periodicals, and the delight of a finely crafted artifact.

Within the package are 3 issues, each in the form of 7" vinyl records. Every issue conforms to the same prescribed editorial structures but is composed by a different artist or group. This set contains issues 13-15 featuring (respectively) Andrew W.K., Ian Svenonius, and Walker & Cantrell. The packaging folds out to a beautiful letter-pressed poster containing information about the Journal, the musicians, and the compositional process.

The Journal's fifth three-7" collection ships out August 1st (there'll also be a zine edition, with additional photos and writing). On Tuesday, July 7th, JPN will have a release party at Santos Party House with contributors Andrew W.K., in his first "spoken word" performance, and comedy duo Walker & Cantrell, as well as TV Baby and Jayson Green. Tickets are on sale.

The one contributor not at the party, Ian Svenonius, is represented above with his song "Let's All Dream." The track finds Svenonius with Felt Letters, a band with Fugazi drummer Brendan Canty and Tom Bunnell.

At the core of the Journal are the "prescribed editorial structures" dictated by founder and editor Byron Kalet. The structures in question come as a diagram that maps out different points of repetition, tension and dynamics for the artists. As far as graphic notation goes, the map is fairly tame, and the notes make clear that the artists are free to interpret the instructions as they wish.

As a result, the score, which is included in the packaging, ends up providing an alternate way to interpret the music. The listener tries to trace the songs back to the cryptic picture. It should be said, the records come packaged in one ingeniously folded piece of letter-pressed card stock, which manages to delicately cradle the three discs and allow easy access to the liner notes inside.

The three contributions in these new issues weigh heavily on "spoken word" -- and past releases are a mixed bag of styles. The Spring/Summer '08 edition brought together the moody rock of Past Lives, the found sound of Bora Yoon + Ben Frost, and the catchy J-pop of Na + Junko, all working under the same guidelines.

We asked Byron Kalet to explain the motivation behind the sets and give a bit of background on the magazine...

BV: Sum up briefly what the Journal of Popular Noise is?
BK: Most basically, the JPN is an audio magazine. We've tried to take all the conventions of the way a normal printed magazine is put together and applied those structures to how one writes and records a record. We try to do everything thing from an editorial perspective, from the artists we approach to the design of the packaging.

BV: When did it start? What was the original impetus and/or inspiration for the magazine?
BK: I grew up playing music in Seattle, but abandoned that path (or so I thought at the time) to move to New York and study design. I found that there was a lot of common ground between the rules that go into a good printed compositions and those that go into musical ones. I think people have been exploring this overlap for a while (Kandinsky, Cage, and Eno to name just a few) but I don't think anyone really took it out of the experimental or academic realm and tried to produce some pop culture version of it - except for maybe Muzak, which I'm obsessed with. So, I was really interested in magazines and publication design and it seemed like the perfect analogy for pop music. I started working on the Journal in early 2007 and have been producing them semi-annually since then.

BV:Why did you seek out the contributors you did for this issue?
BK: Since the beginning, I've wanted to do a spoken word record. I just liked the idea, I thought it would be really weird and fun. I had heard that Andrew WK was doing lectures and sort of "motivational speaking" type stuff. I think he's one of the most interesting pop/performance artists around right now and it just seemed like a perfect fit. His issue of the Journal is AMAZING, one of my favorites for sure. I've been a long time fan of Ian Svenonius, he's an incredible performer and seemed like someone who would do something really interesting with this project as well. He was already sort of working on a spoken word project with Brendan Canty (from Fugazi) and artist Tom Bunell, called Felt Letters - so that was also a perfect fit. Additionally, I wanted to have contributors that didn't come from a musical background like Ian and Andrew so when I was introduced to comedians Walker & Cantrell I thought it would be great to see what they could bring to the edition - their record is hilarious but will probably get me sued.

BV: What was the commissioning and subsequent work process like?
BK: It's different every time, every artist has a different way of working - I'm constantly paranoid that I'm going to miss my deadlines and that people are not going to send me stuff on time and all that. It's the same drama as any magazine. I try to get in touch with contributors as far in advance as possible, people like Ian are super busy and asking someone to write and record new material for you is a pretty tall order. But it always seems to work out in the end.

BV: Was it purposeful to have a more speech/voice-driven issue? What effect do you think that's had on the overall feel of the Journal and its mission?
BK: The main thing about doing a spoken word edition was just that I wanted to explore other types of audio recordings - not just music. I feel like music, especially the underground and pop american stuff I've been into is just a very narrow sliver of what's out there. The spoken word thing is hopefully the first of many weird and out there records. It's our mission to explore all type of noise, not just music.

BV: What's in store for the future?
BK: I was hoping to start publishing quarterly, but the way things are right now I might have to hold out. I've got some full length records in the works from some of the previous contributors to the Journal. The fall/winter edition looks like (I'm not promising anything) its going to be Blank Dogs, Free Blood, and Triumph of Lethargy Skinned Alive to Death (mems of Murder City Devils, Pretty Girls Make Graves, Modest Mouse). But that's all secret.

BV: I see your name written as both Byron and Brian? Which is it?
BK: Ha ha, Byron is a nickname I acquired in high school. It's somehow become my real name, but it's the dumbest nickname because it's not really a nickname - it's just a different name that kinda sounds like my name! 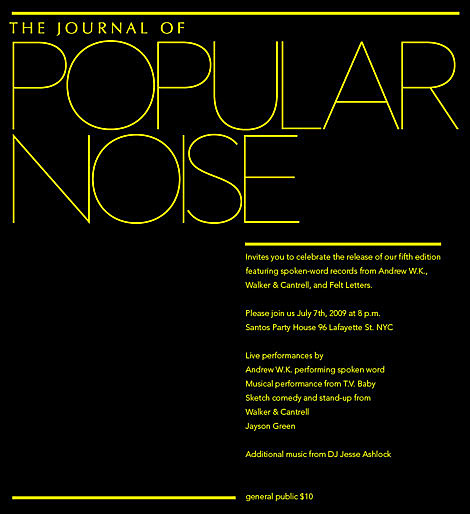