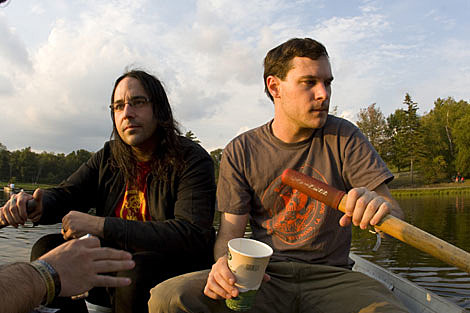 Om is the brainchild of Al Cisneros. In the wake of Sleep's dissolution, Al founded Om with his former Sleep and Asbestosdeath band-mate Chris Hakius. Sleep's guitarist Matt Pike went on to form High On Fire. Over five years, Om has carved a unique path... retaining the doom appeal of Sleep, while forging a new somber, yet also oddly calming tone over the course of three studio albums and various vinyl releases. Chris Hakius recently left the group, but was quickly replaced by drummer Emil Amos of former Om tourmates Grails.

Om was one of many bands who performed at the ATP festival at Kutscher's resort in upstate NY this past weekend. While there, we were able to coax the duo into taking a ride with us in one of the "sea nymphs", aka rowboats, on Kutsher's Lake. Along the way we paddled, and poked and prodded the band about Om, Shrinebuilder and their many other projects including, "Gebel Barkal", a limited Sub Pop 7" they recently put out (both songs from it are available for download on the top of this post). Among other things, we also found out about an electrician who happens to be very talented on the guitar.

Warning, if you have an aversion to poor yachting, please look away now. 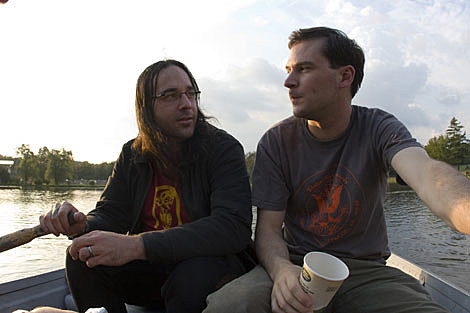 So I managed to catch your show yesterday...

Emil Amos: We were really happy. We were psyched.

It was the first time I saw Emil play as a member of Om and my first thoughts were of your drumming style and how bombastic it kinda is... especially compared to Chris Hakius's more measured style with Om. Are you guys heading in a heavier direction? Is that the plan?

Al Cisneros: It will be heavy. We have the ability now to color with different elements with what Emil's bringing in, which gets us out of those typical fixed parameters. All of the things that were in those parameters will still exist, but now we have the ability to go outside of them. The music's more realized. It feels that since we've been working together, it's one of the first times in my life that when I listen to what we've done, that I've said that's what I was hearing before we started.

Your vision for the song?

Al: Yeah and that's been happening at our practices. To get back to your point though, I think there is no way we can escape the [Tony] "Iommic" influence. I think that's at a cellular level for me at this point... [Geezer] Butler's tutelage. I don't fear that we'll ever stray... that's always going to be part of what we're offering. It's always there.

Emil, I know you play a lot of different instruments in Holy Sons and Grails. Do you guys see the music moving away from just a bass/drums format? Adding different layers to it...

Al: Well, we kinda did with melodica on "(Version)" on the Sub Pop seven-inch...

Emil: We kind of experimented with organ on some stuff but I don't think there's going to be any huge shockers. It's still gonna sound like the same band. Musically, when we first met, the three things that we immediately in conversation bonded on was dub, Pink Floyd, and Billy Cobham, the great drummer.

Emil: Obviously, we aren't going to make a real dub record, although we have all these different little ideas. But somewhere in between those three things spells out the new vibe.

What were the circumstances behind Chris's departure from Om? Was it amicable?

Al: He said his heart wasn't in it any longer. If one feels that way and can't shake it then they should, out of respect for the music, move on. Music, without the heart behind it, isn't music... but hollow sound.

If you got a call from Matt Pike and Chris today to reunite for a show or two, would you be into reforming Sleep?

One thing that I think many people are curious about is this Shrinebuilder project, which is the convergence of many different forces... Wino, Scott Kelly of Neurosis, and Dale Crover Of The Melvins. Whats the status on that? I would imagine it must be tough to get all of you guys in the same room together.

Al: It happens. I am actually rehearsing next weekend... Going up to Scott's and Wino is flying in. We're going to be working on some of that stuff. Dale's on his full length tour with Melvins. We are looking to try and record in either November or December.

(At this point another rowboat comes very close to ours)

Al: So it's a really special time right now. Watch out watch out. We gonna all crash! (joking) 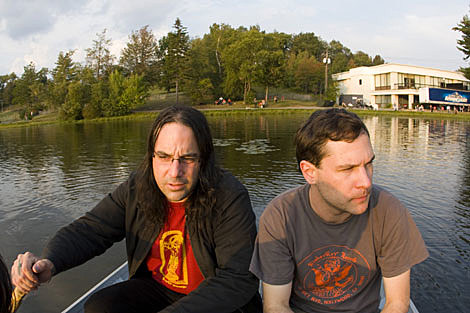 As far as the tunes on Shrinebuilder, what direction do you hear the material going towards? I know that just having you and Wino and Crover in a band kind of denotes something Sabbath-y, but obviously Scott Kelly to the mix changes things slightly, or maybe you guys want to do something completely different....

Al: Its a convergence of the four schools we've all put our lives into. It sounds like Shrinebuilder... you can hear each of those spheres crossing.

Who is going to do the vocals for Shrinebuilder? Has that been decided? Will it be collaborative?

Al: We're sharing duties on some of the material, on other sections just Wino.

Emil, you have a ton on your plate too...

Emil: Yeah, Holy Sons is releasing Decline Of The West on Tuesday (Sept 23rd), and Grails comes out on Oct 7th. We are about as busy as you could possibly be... I think I have five records on my computer that are coming out soon.

(A few other boats edge closer to ours)

Emil: You guys should have had a video camera for this one. I'm ready to take some people DOWN! 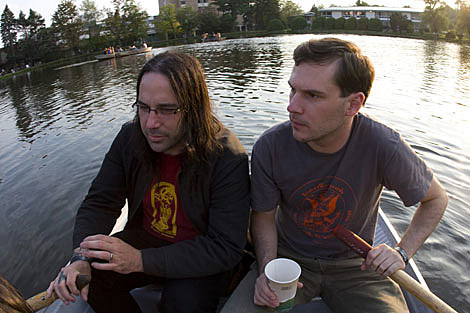 Five records? Wow. What else?

Emil: The records on my computer are all basically finished but I have four Holy Sons records... A new full-length called Drifter's Sympathy for Important Records, The Squanderer which is the next full length after the Important record, a cover record in the style of Kicking Against The Pricks, and My Only Warm Coals, a 35 song retrospective. I'm finishing up a huge Grails DVD project for Temporary Residence, which will be out in March. I did a show with Damo Suzuki, Yellow Swans, White Rainbow, and Valet, but haven't ever had the time to mix it... And a live Om record that we're almost done editing. Seven simultaneous projects...I might die from overload.

So obviously Holy Sons is going nuts. Whats the deal with the Grails DVD exactly? Did this sprout from a compilation of all of the wild clips that we've seen over the years?

Emil: The Grails DVD has taken me over a year of work... it has six music videos, an entire live show in NYC with material from Doomsdayers, Impurities, & Take Refuge, and a 25 minute movie of early European tours & the recording of Interpretations in London in 2004. ... If I can, I'll also include the commercials I put together that people have seen on the web. It was a huge project with hours of scouring through library vaults and scanning through Vietnamese instructional videos of "what to do in case of rat infestation" or conspiracy theories about the secret society who built the moon, very satisfying though.

I gotta say, those commercials were both great and creeped me out. Kind of reminded me alot of Alejandro Jodorowsky. What was it like working with Damo Suzuki? Can was great.

Emil: The Suzuki show was great... it's just a shame I can't get to it because of time. Damo's a lover... a saint of a man... but the more people you play with out there that you've gravitated towards from their music being amazing, the more you realize how many of these people are incredibly sweet and down to earth.

Emil: You can see the clips online, there's a myspace video. We kinda didn't really have time to do it... I think it's supposed to be for March.

Om Live in Japan - Flight of the Eagle from The Fact Facer on Vimeo.

Al: Actually we are trying to have that out on Important by mid-February, that's Important's plan.

So what about a new album?

Al: We're going to be recording our next studio album in March with Steve Albini.

Al: We have one more song to just... completely solidify but, like I was saying earlier, it's... there. It ís not like what I was used to in the past, the exception being Sleep's Holy Mountain, but on Sleep's Jerusalem and even certain areas in Om's early discography- to me the music was almost, but not fully realized. When Emil & I work we noticed that it's like a greenhouse, it just happens. And the work stands on its own.

Emil: Yeah, the majority of the record was written in one weekend session pretty much... and we are already talking about some special split ideas.

Al: Prior to that, we are just making an extreme focus on completing the Albini record.

(The band, sitting next to each other and each holding an oar, look around and see that most of the "sea nymphs" have returned to the dock)

Emil: Should we head back? You have any more questions?

Just a few, but we can just head back and chill instead of staying out here.

Al: Grab a beer or something.

OK sounds good. It might be easier if I took both oars and bring us back in.

(Emil looks at Al, they attempt to coordinate rowing)

Emil: I need more power from you. 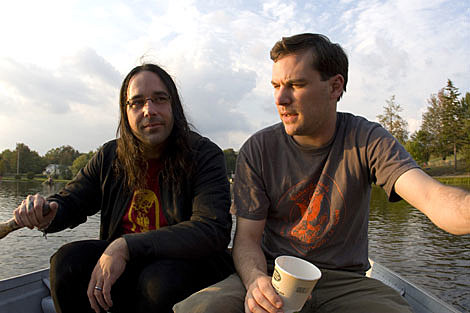 So getting back to the [Sub Pop] Gebel Barkal 7". Are there any plans to re-press it? 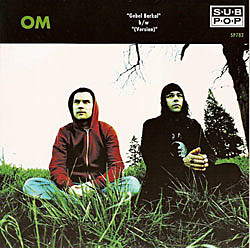 Emil: We can't. We're not allowed to because of the subscription thing. This happens to all bands, especially Grails has been burned by this, because labels perpetuate this whole limited culture. I don't think that the band's thrive off the fact that people had to buy that 7" for $101 on ebay. Did you see that? They don't care. They don't want that going on. So that seven inch is kind of...in a sense.... I don't want to say doomed, but it's not a real record because nobody can get it. It kind of annoys the shit out of us. I mean in general, that's not a stab at them. It's just fucking annoying.

Who are you guys hot to see this weekend at ATP?

Emil: Polvo definitely. It's funny, cause Polvo are from Chapel Hill and Ash put in new outlets in my mom's house, so it is totally amazing for me to bring it full circle. We played with Dinosaur Jr. two nights ago and when I was in high school they were my favorite band of all time. It's pretty surreal to smoke pot and play on Murph's drums. It's fucking amazing. They are on the top of their game live. But Harmonia was awesome too. They were fucking amazing.

Al: I'm looking forward to seeing Dinosaur Jr. tonight because we are not playing and I can really focus on it. 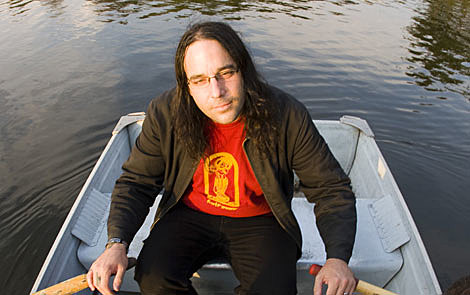