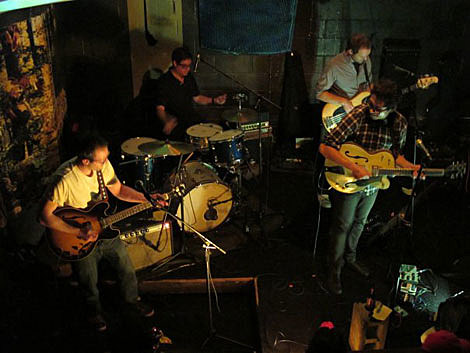 Brooklyn band Takka Takka are playing a show in DUMBO tonight (11/5). This gig follows a few shows that the band played in town during CMJ. You can see them playing at one of the showcases in the picture above. If you're familiar with the band, you may notice some changes including one less member, and no it's not front-man Gabe Levine aka Samuel Izdat. Gabe/Samuel has started playing solo, but that's in addition to being in the band.

In light of all this, I asked Takka drummer Conrad Doucette if he would answer a few questions...

BV: Did you watch the last game of the World Series last night?

BV: Were you jumping up and down and screaming really loudly when the Yankees won?

Conrad: I was jumping up and down and screaming loudly in the alternate universe where the Cincinnati Reds have a chance to win a World Series.

BV: Ha. So how long have you been drumming, I mean playing second base, in Takka Takka?

Conrad: Roughly, yes. Gabe [Levine] has always been the one constant in Takka, and I guess I hold the position as second-longest serving member. We've been fortunate to have many close friends in the band over the years.

BV: How many times has the lineup changed?

Conrad: We're on the fourth lineup since I've been in the band.

BV: What were the most recent changes?

Conrad: We've gone from a five piece back to a four piece. Our previous bassist moved out of town and is focused on an impending bundle of joy. And another member is focusing on his job in "the industry." So now we have a new bassist, Craig Montoro. He's a super chap who can be heard blowing trumpet all over Sufjan Stevens' Illinois album.

BV: Oh cool. Did you see that Paste just named that record the best album of the decade?

BV: I think they should say "I like the taste of Paste" 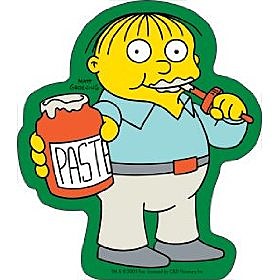 BV: Any new albums you would recommend (if you were Paste for instance)?

Conrad: I've been into Little Death by Pete and the Pirates. They're a fantastic band from England that we played a show with two years ago in London. I saw them recently at [a BrooklynVegan day party during] CMJ and my love for them was renewed. Apparently they're close to finishing a new album. I've also recently gone through phases of listening to the song "Marching Through Your Head" by a band called Zeus on repeat.

Conrad: And I quite enjoyed The Long Count, but I guess that's not an album. Good stuff, though!

BV: I was just going to ask you about that. Izdat I mean. How do you feel about your frontman going off and doing the solo thing?

Conrad: Gabe is constantly writing and tinkering in our practice space. All of the Sam stuff has its own particular sound; it's a different vibe from Takka. We took the summer off so Gabe went and wrote and recorded these songs. He's still finishing it, I think, but everything I've heard is superb.

BV: And now you guys are working on a new album?

Conrad: we've just begun writing it. Right now it's called MOVER/BELIEVER. There's an idea we have for it that guiding the initial process. Who knows how it'll turn out, but I'm excited. Writing and recording is the fun part of all this.

BV: Any new songs complete enough that you're playing them live yet? And speaking of live, how was CMJ. I know you played a few shows (with the new lineup I assume).

Conrad: Well, so far we have one new song that we've been trying out. It's definitely in an early stage. If the past is any indication, it will probably go through five or six rewrites before we record - if we record it.

BV: Any side projects in the works for you?

Conrad: I've been playing with Alina Simone lately. We met when she and we played some shows in the midwest last summer. I played a little on her upcoming album, and have been playing shows with her. Her album is fantastic; I can't wait for people to hear it.

BV: You didn't play on the new Flaming Lips album too did you???

Conrad: No - I just think they're a fantastic band. But if they ever needed some extra help with live percussion, I'd wear any costume they gave me.