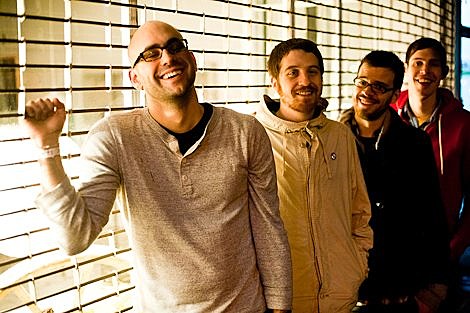 Seattle band BOAT were in town over the weekend playing Friday (11/13) at Union Hall and Saturday (11/13) at Bruar Falls. The band were on at both shows, probably due in part to vocal and ready-to-participate crowds who did not want them to stop playing. BV photographer Ryan Muir was at the Bruar show and took the band out for a photo session after the show. Before the show, I sat down with them over dinner for a long, funny conversation that included such topics as not fitting in in today's indie landscape; how recycling would seem less important if we knew aliens were going to invade; and a quiz about 1989 (the name of the new album's lead track). You'd be reading all of that right now if I properly knew how to operate my digital recorder, which only managed to capture 54 seconds of the interview. I'm infinitely bummed... However, BOAT frontman D. Crane agreed to a little post-tour wrap-up Q&A to make up for it. More of those pictures and that interview below... 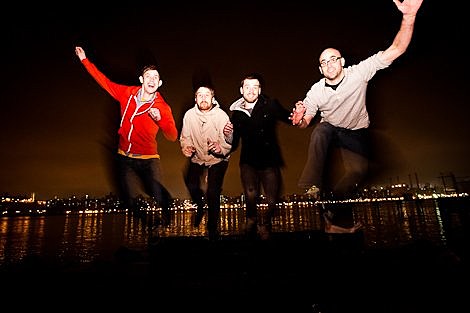 D. Crane: The tour went great. We got to play an awesome show with Pants Yell! in Philadelphia at an old house on fraternity row. It is a weird co-ed super non fraternity/fraternity/paradox/where everyone is super positive and there is no drinking at the shows. It is like a music fraternity.

The Brooklyn shows were awesome as well. I find it amazing and daunting that people so far away from home dig the band. This is officially the first tour where no strings were broken/technical difficulties just seemed to avoid us. Except for a lack of room for our big apple replica at Bruar Falls....everything was like a dream!

Bill: Did you have a particularly New York-ish moment?

D. Crane: Aside from the bizarre, slightly psychotic merging practices by NY drivers on the BQE... No... but I have a moment that I will not forget. At one of the venues we played, we got dinner and then were asked if we wanted to split the check. He acted really grumpy....gave us all a lot of grief (slamming down cards....not responding to thank you). So....I decided to write "Whistle while you work, bro" on the bottom of the receipt. He seemed kind of bro-ish. It led me to being scared of an eminent "waiter on bandmember" attack... throughout the night. So I learned that I need to scale back my passive aggressive behavior... at least on the east coast.

Bill: Both BOAT shows were in Brooklyn. Why the Manhattan dis?

D. Crane: Woah! We in no way meant to dis Manhattan! We initially had planned to play the Cake Shop, then it got moved to Bruar Falls. So, you could ask Manhattan... why the BOAT dis?

Bill: Any run-ins with Brooklyn's indie rock elite? Or celebrity sitings in general?

D. Crane: There were absolutely no celebrity sightings. Not even lookalikes. Last time we were hear we saw Keanu Reeves and Sarah Silverman in the same hour. But alas that was in Manhattan! Manhattan is the new Brooklyn? Well....I guess I thought I saw Robin from the Fleet Foxes eating at a lovely Asian restaurant.....but I may be wrong. Who can tell with all the beards!

D. Crane: I actually think none of us drank NY coffee. I still adore the cups. The blue ones with gold writing. It's the little things! I wish we made one of those for the stage set. Seattle's pizza is not extraordinary... except for a place on Capitol Hill called Piecora's. They have a Mets clock in there. They catered my wedding. They are the nicest people ever. I still get asked, "Hey, how's the wife?" It also has a Cheers element to it... I can just walk in and the waiter remembers my order. I have spent a lot of money there! There fried peppers are amazing... and their calzones are like footballs... NFL footballs... not junior high size.

Bill: What's next for BOAT? When are you coming back?

D. Crane: Unfortunately, I think at least three of us caught the flu after or during, or somewhere around Brooklyn. Next for BOAT is Nyquil and naps. I had to call in sick for work today.... first time in a long time!

We hope to do some more touring in the new year, and also get BOAT to the UK... if nothing else than to eat at Pret a Manger....the best
option for cheap vegetarians. We shall see. If Manhattan releases her ban on BOAT... we may return to the NYC area.

D. Crane: We are still thrilled and amazed that we get to travel across the country and play on weekend nights at cool venues. I never saw this coming. We are truly lucky dudes. Brooklyn has been very, very good to BOAT. 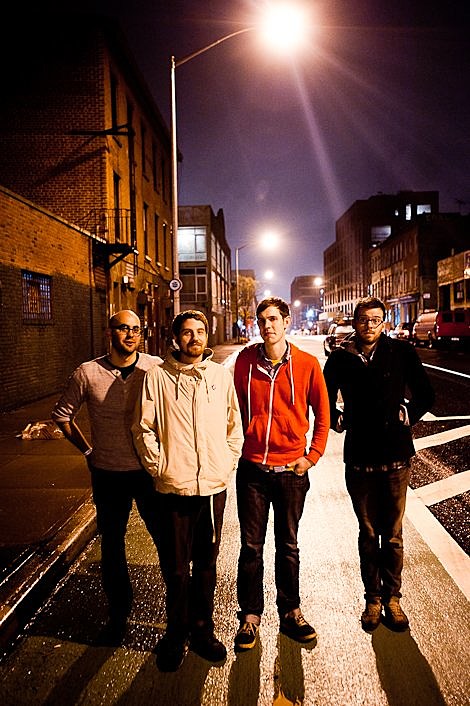 Before the Bruar Falls show, Jenn from the blog Pelly Twins took BOAT to Coney Island for a New York grit and some busking in the rain (no wonder they're all sick!). Here is some of the footage: