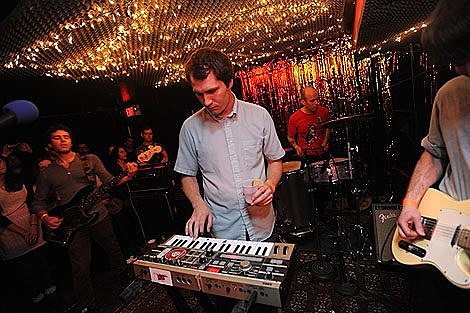 The Soft Pack celebrated the release of their self-titled debut LP on Kemado records at the Cake Shop on the Lower East Side of New York on Friday (2/5) with a free and packed midnight show. We had the chance to chat with lead singer Matt Lamkin after the show and before the boys from San Diego hit the road on a tour of the US and Europe that will finally wrap up at Coachella in April.

That interview and more pictures from Cake Shop below...

GABI: So you guys just played 10 shows in one day in Los Angeles?

MATT: Yes! It was really awesome, we're from San Diego not LA, [but] Sean Carlson and Keith Morris put on this thing called the Fuck Yeah Fest, which is this kind of like this punk festival they do every year, every summer. Sean books punk shows all over LA [and he set it up].

GABI: Do you guys think of yourselves as "punk rock"?

GABI: How tired were you after the 10 shows?

MATT: That's the thing, it was fucking really exhausting, but so many cool people were involved to make it happen, that was really inspiring. There were probably 50 people outside of the band, that were working on the set, on the production - and essentially it was a production - people driving, people carrying, people hanging out, people partying.
People were involved and supportive and that was amazing. People came to every fucking show and wanted us to rock out, so we had to, we wanted to...

GABI: So the same people came to all 10 shows?

MATT: No no no no. But that's the thing, there were a couple people where I was like, "You were at the last 3 shows! What the fuck are you doing here? How did you get here? It was hard enough for us to get here."

GABI: So where did you guys play throughout LA? It's like 70 miles across?

MATT: We played all over. It started in Highland Park, in through Echo Park, Silverlake, Hollywood... In Silverlake we played at this place Frankie's, it's a clothing store and a barber shop, I think. Cool little place. The guy was super awesome, super excited about having us. It was cool.
Then we shot off to Long Beach, and did an in-store, and then we did a little acoustic thing on the beach as the sun was going down. We went to a couple of house parties. Every show was different which was exciting. This one happened to be a punk house party show that sounded like Black Flag or something, and we were rocking out really hard, and people were crowd surfing.

GABI: Which one was this?

MATT: It was Kevin from Crystal Antlers' house, and there were kids crowd surfing. Those Crystal Antlers kids are cool, really cool dudes that we're friends with. We hang out with them. And rumor has it that it was Kevin's idea, this whole 10 shows thing. 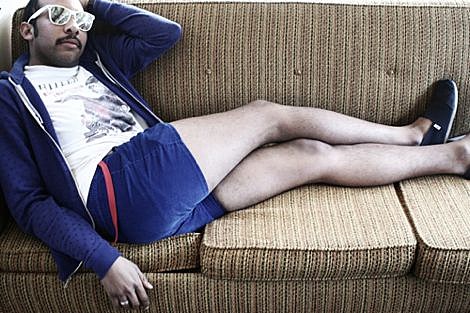 GABI: Do you think you broke a record?

MATT: [Immediate response] No!
But like I'm saying every show was packed with different people, and it was a good thing. We were going literally like 20 or 30 miles away, it was literally touring LA and every show was different, which was really exciting. And our last show was all kind of a big blow out, it was in a big warehouse [in Frogtown] full of people rockin' out, really excited for the last show. And we were like dead. We totally fed off the energy of the people, we were dying of exhaustion. We were all so surprised and blown away that it actually happened... worked... and people were in to it the whole time.

GABI: Is this upcoming tour you're starting the biggest tour you've done to date?

MATT: No, we've done the US, it's massive but we've done this same exact tour before. We're also doing England and Europe this time too. It will be more this time, because we've never done this much of Europe.

GABI: Where in Europe haven't you been before?

MATT: Germany? Well, we've played Berlin, but we're doing Hamburg which is really exciting because obviously it's a historical place. Beatles, The Monks, and tons of English bands, and bands of that time played there. We're also doing Brussels and Paris.

GABI: What's your favorite food to eat on tour?

MATT: When I'm on tour, I'm not a vegetarian or anything, but you just kind of spend so much time sitting on your ass, that I kind of like to eat like - in the US, I'll eat like the veggie sandwich at whatever place.

GABI: How are the veggie sandwiches?

MATT: They are not always good. It's pretty much horrible on the road. You're not eating for enjoyment, you're eating because... And I feel like you're just sitting on your ass all day, so you just want to eat and not get full and...

GABI: Do you ever cook on the road?

MATT: We tried that. On a tour we did bring a camping stove and we cooked beans and stuff. But it ended up taking too much time.

GABI: Tell us some memorable tour experiences in Europe.

MATT: One time we played Paris, and we got to open for a bunch of bands, like the Black Lips and a handful of other bands from Paris. And we played this place, La Cigale, which is this old theater, which might be one of the best venues I've ever been to, it's got to be over a hundred years old. Like everything was great, it sounded so good, like anywhere in the place it sounded like a practice space -not blaring loud - almost like you were listening to your stereo. Because it's all wood and old, and back then it was built back when people paid attention to shit.

GABI: And they treat you better in Europe.

MATT: Yeah! They feed you! We went back stage and there was a bottle of champagne, and wine and grapes, and - obviously - French cheeses, and then there was catering and there'd be like salmon or a rabbit or something like that.

GABI: What was it like touring with the Black Lips?

MATT: Those guys are actually Southern gentlemen, they're awesome dudes. On stage [at La Cigale] which is legendary and old, they were throwing up on stage. You know. It was...awesome.

GABI: And did you throw up?

MATT: Actually, nothing that crazy. It's been sort of like a good house party that gets crazier, it's no longer about pop or anything. It's about intensity.

MATT: So we were a brand new band, maybe not BRAND new we'd been around for about a year or so, and we were driving to our first SXSW in March 2008. We were trying to be really ambitious and it was the release night of our first EP, The Muslims EP, we played The Casbah in San Diego. Not the next day, but the day after the next day we had to play at SXSW in Austin. Anyway we had to drive 20 hours straight to get there in time to sleep and play the next day. So we play our EP release show and then we started driving from San Diego to Arizona, we're going on the 8, and we're in Arizona at some border stop or something, you know, they have those out there. They stop us and we tell them we're a band, and apparently their drug dog was going crazy or something and we're like, "Well, uh, we don't have anything. Search the van." So we're standing outside and we're waiting, and one of the borders guys says, "Hey man, you guys look cold, why don't you hop in my van?" And we say, "Yeah, great, thanks!" And it was a paddy wagon and he had just locked us up. So we're in the van and we say, "Oh this is jail...uh never mind. We're not going to be warm in here, this is just metal and a fence." But anyway the point is, we sat there and then they were like, "Well, we didn't find anything in the van. Why don't you guys empty your pockets?" They pulled us out and we emptied our pockets and we didn't have anything, and they tell us to get the fuck out of there, whatever. So we get in our van and they had trashed our van and the drug dog just ate all our food, we had burritos and stuff and the dog just ate all of it. The dog was just hungry.
At the end of it all we were just like, "Fuck man, we just got thrown in jail on our first stop out to SXSW." 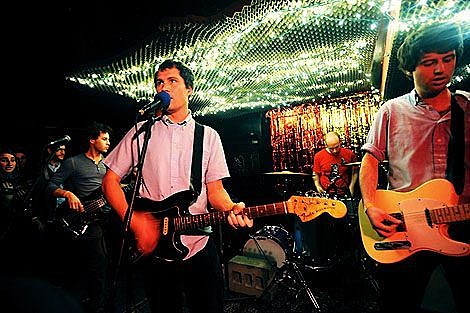 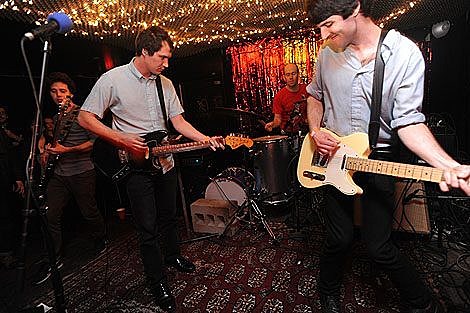 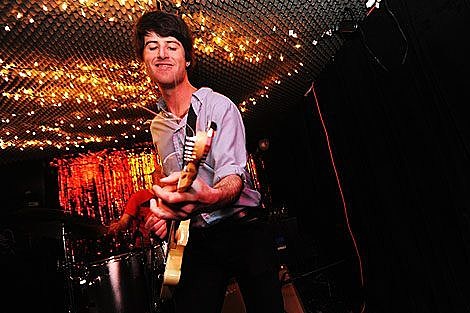 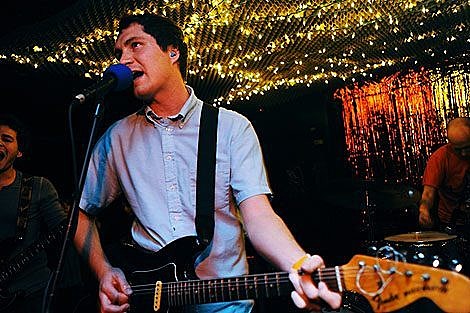 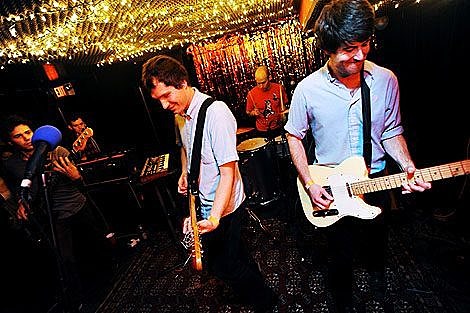 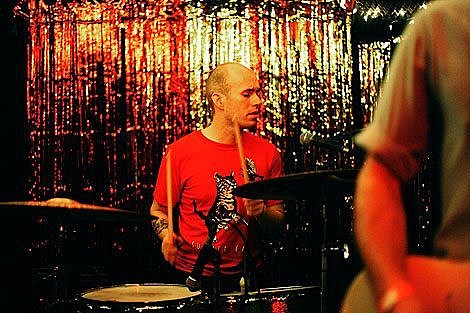 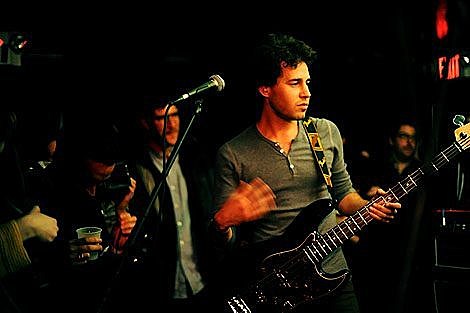 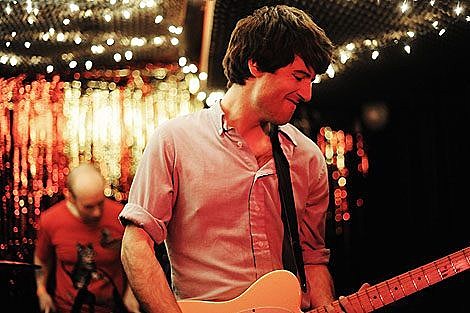 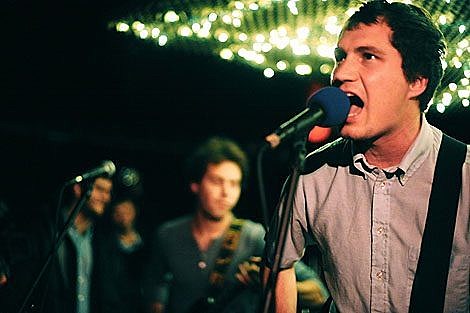 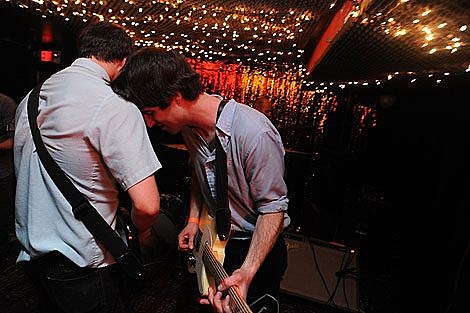 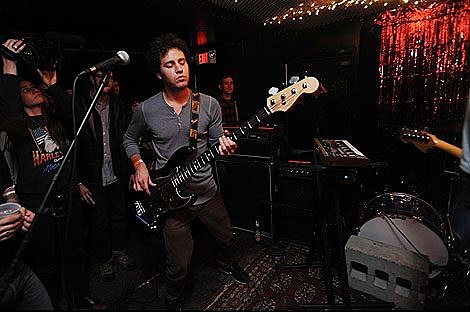 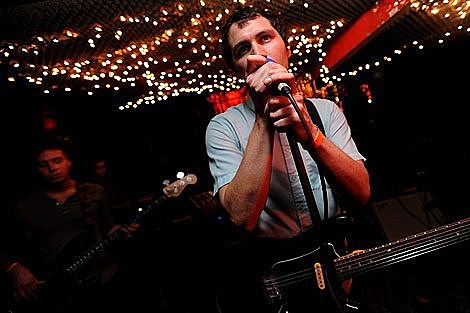 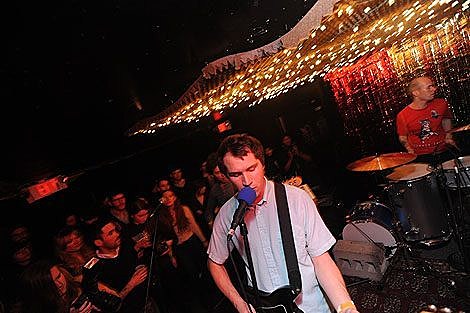 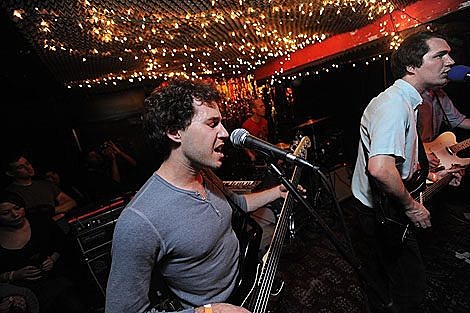 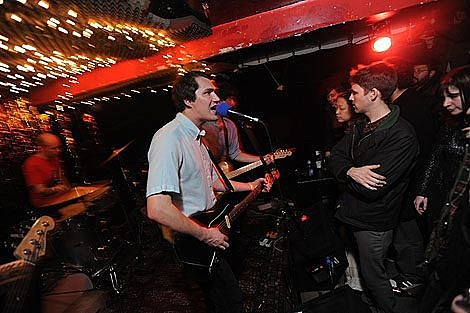 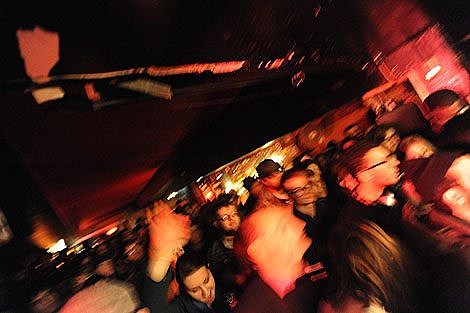 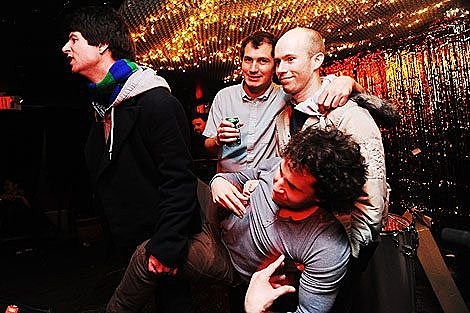