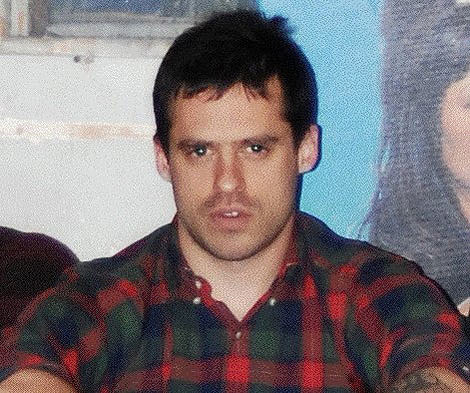 The source argument of Malcolm Gladwell's bestseller The Tipping Point is that the smallest of sparks can set the world ablaze. Hailed as one of "the most vital music nights in town" by Time Out New York, Curran Reynolds is testing Gladwell's theory every Monday at Precious Metal, where the heavy underground can literally be found underground.... in the basement of Lit Lounge.

In addition to Precious Metal, Curran Reynolds has a few other balls in the air. He does PR for multiple heavy indie labels and beats the skins for his band, Wetnurse. This April Wetnurse signed with Seventh Rule (starter home for Akimbo, Sweet Cobra, Plague Bringer, among others). They'll drop Invisible City on September 30th (this Tuesday).

Invisible City is just that, an unseen metropolis of unpredictable left-turns and locals-only rights that only the most learned of metalheads should be able to traverse, yet catchiness grows like a weed through the cracked concrete. Stylistically, Invisible City reflects the diversity of Precious Metal, representing noise rock, metal, post-hardcore, and grind while never falling into the trappings of any single genre.

Wetnurse is prepping for an east coast tour in the month of October, kicking off with an Invisible City record release show at Precious Metal at Lit Lounge on Sept 29th (tonight) and concluding with an opening slot for the mighty Harvey f'n Milk at Europa on November 2nd (tickets are on sale)

We sat down with Curran earlier this month to discuss his party, Lansing-Dreiden, the influence of Steve Austin, and..... Tchaikovsky?

BrooklynVegan: So let's start out with the origins of Precious Metal...

Curran Reynolds: Early 2006, this girl Aviva was staying at my apartment. She was a bartender at Lit at the time and was starting a Monday night metal party called Precious Metal. One Monday her DJ bailed last minute and she invited me down to fill in. I think she was expecting Def Leppard but instead I played some really brutal jams that night. She invited me back again anyway and it built from there. She slowly turned the whole night over to me. I started booking bands, guest DJs, and special events. The Precious Metal name just stuck. This past May, I had my two-year anniversary show.

You have had some great bands pass through Precious Metal over the past few years. What's your thought process on choosing those bands?

I have been a publicist for more than eight years, self-employed for three of those, doing PR work for labels like Level Plane, Seventh Rule, SuperNova, and Black Box. Through that and through Wetnurse, I've met a lot of people. So there's personal connections with a lot of the bands I book. In other cases, I just reach out to bands I like or they reach out to me. One thing I really love is getting bands from all over the world to play. So far, I've had bands from Australia, England, Germany, Italy, Belgium, Canada, and all over the US. It feels great, helping out these bands on tour, particularly the guys who are really far from home. And every time a great touring band comes through from some far-off place, that's a chance for some local New York bands to play a cool show. Everyone wins.

Who has really wowed you at Precious Metal? Over the past two years, have there been any particularly special moments to note? 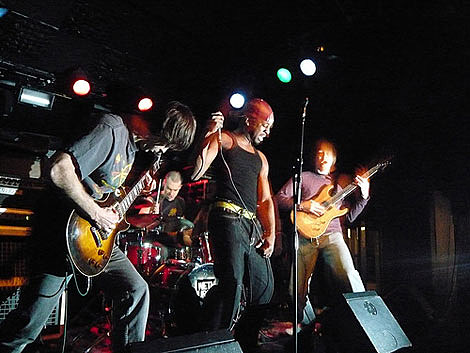 My guitarist Greg came up with the name. We've always interpreted it in a positive way, saying it represents a giving, nurturing ideal. A woman who nurses other women's babies, what could be kinder? Yet there's a darkness to it. It implies the crossing of various boundaries, especially when you consider she's being paid for the service.

How was Wetnurse formed?

The founder of the band was our original guitarist, Ian. Ian and I had gone to high school together in Maine and played music together at age 13. We both moved to NYC eventually, ran into each other here in the city, and started playing again. All the other original members of Wetnurse - Gene (vox), Greg (guitar), and Hunter (bass) -- were guys who Ian knew from one place or another. Seven years later, Ian and Hunter have moved on to other things (Ed Note: Hunter went formed Leader). Gene, Greg, and I are still going for it, with the addition of my friend Garett on guitar and our brand new bassist Ryan.

What were some of the shared influences that solidified that bond?

Well, it was Today Is The Day that originally inspired Gene to join the band. The story goes, Ian handed Gene a bag of mushrooms and Today Is The Day's "Willpower" and it transformed him overnight. But to take it a little deeper, I'd say we were all voracious music listeners, listening to different stuff all across the map, and we were each putting a lifetime of influences into the band. We all look at Wetnurse as a wide-open musical forum.

Wetnurse recently signed to Seventh Rule, can we get some deets on Invisible City? Who's on the boards etc...

The new Wetnurse album is called Invisible City. It will be out September 30 on Seventh Rule on CD and vinyl. It was recorded and mixed by Martin Bisi at B.C. Studio in Brooklyn. It was mastered by Alan Douches. The cover art is by Lansing-Dreiden.

Lansing-Dreiden is definitely an interesting choice for your cover art. In an age where the heavy go-to guys are John Baizley, Josh Graham, Aaron Turner, or Seldon Hunt, how did you arrive at that choice?

I am endlessly inspired by Lansing-Dreiden's work, both in art and music, and the guys are good acquaintances of mine. We enlisted their skills for the cover art of our self-titled, self-released album back in 2004. The idea was to have the Invisible City cover be a continuation of the last one, like pieces in a series. Musically too, there are things linking the two albums, that a careful listener might pick up on.

We've been playing weekends around the East Coast all summer and we're booking a US tour with Khann for the month of October. After that we're going to keep on touring and writing the next record. We want to tour outside the US too. 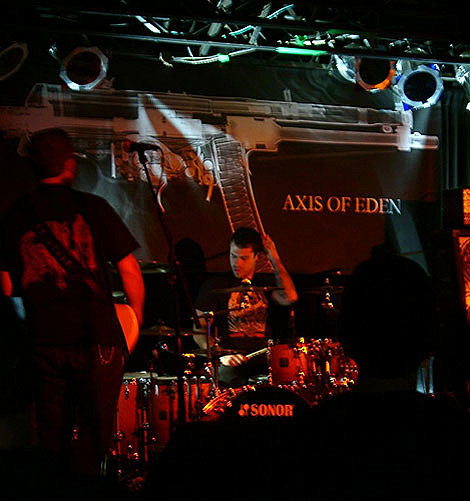 What band have you played/toured with did you really enjoy & why?

Today Is The Day. Steve Austin has been an inspiration to me since I discovered "Willpower" in 1995. Wetnurse first played with Today Is The Day last fall. The day after that show, I hit the road to sell merch for Today Is The Day and Steve's other band, Taipan. That same day, the Taipan drummer quit the tour and Steve asked me to replace him. I learned the songs as best I could in one afternoon and for the next month I was onstage every night, from here to LA and back, playing drums behind one of my musical heroes.

A lot of good memories also come from Wetnurse's first big US tour. We booked the tour ourselves and we wound up playing with some badass bands in a wide range of DIY venues: A flooded basement in Worcester with Nadir; a decrepit shack in Tallahassee with The Heuristic; a garage in Salt Lake City with Gaza; a rather stately living room in Indianapolis with The Dream Is Dead; and so on.

What are some bands outside of heavy music that you are feeling?

My friend Jorge's new pop band, Violens, is incredible. Everything Lansing-Dreiden creates is gold. I'm a fan of Michael Gira and his Young God label. My friend Daniel Ahearn is a great songwriter from LA. I'm more and more interested in older bands lately, like The Grateful Dead, up through Sweet, Television, The Cramps, over to Joy Division, and so forth. Jane's Addiction, as they were in the late 80's, is my single favorite band of all time. All these bands were "heavy" in their own way really, it's just that their methods were different than those of, say, death metal bands. I've been thinking about music from the 50's recently too -- some of the earliest rock n' roll has such a ghostly feeling to it. Also, my roommate recently opened a club on Lafayette Street called Santos and I look forward to getting an education in dance music there.

Who do you think is really on the come up?

You have done some work with Matthew Barney... any interesting anecdotes?

In early 2006, right before Precious Metal got started, I got the chance to work for Matthew Barney for a few months, helping build large plastic sculptures for a gallery show that tied in with his film, Drawing Restraint 9. I'd been a fan of his work for a long time and it was an honor to be involved. There were some funny situations, like the time I got all this toxic resin in my hair and had to shave my head, or the hours and hours spent scraping Vaseline off rubber molds with Popsicle sticks. And yes, there was lots of metal played in the studio while we worked. I visited the studio again recently and Sublime Cadaveric Decomposition was on the stereo when I arrived. Good to see they are keeping it brutal.

Five records that influenced you to listen to heavy music:

The 1812 Overture is the first piece of music I loved. My dad used to play it in the house when I was 4 years old and it would put me in a really ecstatic state of mind. It's a slow building piece that erupts into the most epic, triumphant ending. Tchaikovsky used real cannons as percussion. To this day, my musical taste is probably rooted in the 1812 Overture. It's a lifelong quest to find music that brings me to that same level of excitement.

87-88:
Bon Jovi - Slippery When Wet
Europe - The Final Countdown
Pink Floyd - The Dark Side Of The Moon
The Who - Quadrophenia
Metallica - The $5.98 EP/Garage Days Re-revisited

Five favorite records of the past five years:

Five records that you can't wait to hear:

Create your supergroup (besides your current group natch):

on MySpace: Wetnurse (the band) & Precious Metal (the party)