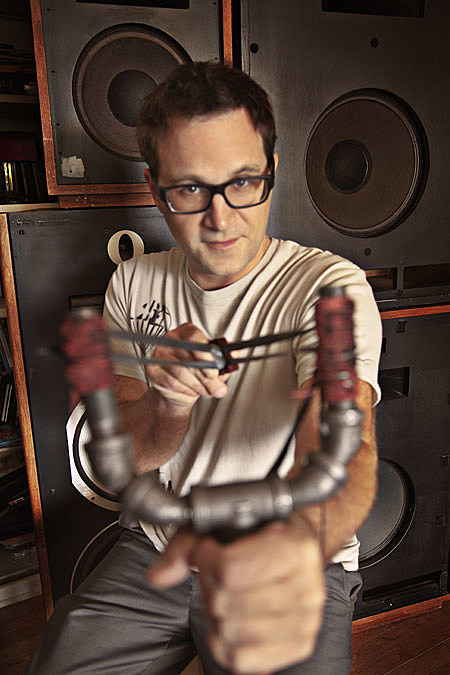 TV on the Radio guitarist, multi-instrumentalist and producer David Andrew Sitek has announced his new project Maximum Balloon. Not surprisingly, the TVOTR / Yeah Yeah Yeahs / Liars / Dragons of Zynth / Holly Miranda / Scarlett Johansson producer worked with a host of guest artists on the project, which will see the light of day in the form of a self-titled album on August 24th via DGC/Interscope Records.

"...Then Aku (Dragons of Zynth) called and said he was in town and asked what I was up to and I said, "Making a song that you have to come and fix!" So he came by the studio and he laid the vocals down. We pretty much started Maximum Balloon on that day."

Other guest artists on the album will include Tunde Adebimpe and Kyp Malone from TVOTR, Karen O from Yeah Yeah Yeahs, Yukimi Nagano from Little Dragon, Holly Miranda, Theophilus London and more. David Byrne is rumored. Aku from Dragons of Zynth is featured on "Tiger," the first track to be released off the album. "Tiger" will be available on iTunes and all digital partners on June 15th, but you can also hear it in a video below, or today at www.MaximumBalloon.com. In addition to "Tiger", Maximum Balloon will be regularly releasing a series of digital singles in the weeks leading up to the release of the album.

Billy Jones of new musical project New Moods, who last conducted an interview for this site in 2006, called up Dave on Friday to discuss the making of Maximum Balloon, barbershop quartets, Cyndi Lauper, the future of TVOTR and more. Their chat starts here....

Billy: Hey Dave, Can you hear me?

Billy: I rigged this to be on the speakerphone of my Blackberry to be recording through GarageBand, a slightly complicated setup...

Dave: Awesome, put me through The Crystalizer...

Billy: I actually have you through Long Panning Ping Pong Delay right now...

Dave: I can't wait for Soundtoys to come out with an iPhone app.

Billy: Are you watching soccer like everybody else? Did I interrupt you? I know it's World Cup fever time.

Dave: No, I have no business watching sports. I don't even have a television.

Dave: It was just nonsense dictated by 90% of my life. The idea of when you were a kid and you would put messages in a balloon and just send them out there. I just kinda feel like these songs, as they are not attached to a touring regular band, I kinda felt like the songs had that mission to just drift off. Who knows where they'll land. Hopefully, the dance floor...or the farmer's market.

Billy: Which are synonymous these days I think.

Dave: They go hand in hand.

Billy: At least in Park Slope where I live... So, this is your first solo record. I know you've done lots of producing and stuff and worked with a lot of people. How would you compare the process of doing this as to working in the context of TV on the Radio?

Dave: I think that the title "solo" or the word "solo" is a little deceptive because it is more like a collaboration. I spare us all from me singing on every track. In terms of how it differs from TV on the Radio? I can get away with using 35 synthesizers because there is no way we would take that on tour. I think that it was mostly about creating songs that had to do service to the speakers and not to any of the other architecture. You can just say, "Hey, I wonder what that would sound like?" and threw a lot of stuff in there that I wouldn't put my band through.

Billy: You mention singing. I know I read somewhere on the Internet that you know you don't consider yourself a singing force in TV on the Radio. I heard your cover of The Troggs "With a Girl Like You" from the Dark Was the Night compilation and it sounded great. Do you do more singing on this record? I know you have a lot of guest vocalists, but do you sing?

Dave: I do sing back up on some songs and I also do make animal noises on the new single "Tiger."

Dave: In my long list of nerdy things that I have accomplished in this life, I sang barbershop quartet when I was in high school for fun on my own in the after hours. I was in an organization called SPEBQSA, the Society for Preservation and Encouragement of Barbershop Quartet Singing in America. I sang that and was also in a hardcore band at the same time, but I had to hide the barbershop stuff from the band.

Billy: It was deep seated in there, was it not?

Dave: Which I have yet to record. I may get back into it. For me singing on that Dark Was the Night track ("With a Girl Like You") was that I just felt really strongly about the cause and the people who were putting it together. The Dessner brothers (The National). You know I just really liked how involved they were with it. So I was like "Ok this is what I can do and this is what I can do now." I felt really good about that. 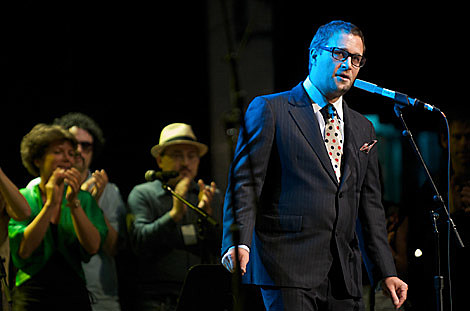 Billy: You mentioned the dance floor before. What were some of your influences when you were putting the tracks together? What were you listening to, or what going through your ears when you were making it?

Dave: I kinda stopped listening to music for a couple years. I was working 20 hour days, especially in New York, so at the end of the day I really wouldn't listen to anything. Once I moved out here [to California], you know everyone drives everywhere, I would make these mix discs for my car. The one that I listened to the most, although I don't think it's a direct influence, it's one that stands out the most was Madonna; it had couple of her first tracks are on it, it had that song by Prince's "17 Days" on it, it's the B side from When Doves Cry. And that sound "Extra Lovable" that's on a demo pirated release that I was really into. There's quite a few. I was listening to a lot of 80s stuff, "Don't You Forget About Me," Cyndi Lauper, you know? I was like trying to make "She's So Unusual"

Billy: I was actually just listening to "Good Enough" from Goonies...I heard a snippet of your song "Tiger" on the Internet, it had a sort of 80's post disco hyperfunk sound to it...

Dave: Well, Nile Rodgers and Chic and all the stuff that he did there, and the other stuff that he produced has always been a huge influence. I kinda felt like I got all the distorted guitars and big amplifiers out of my system early so I just like the idea of exploring this almost anemic sound where it's just, the guitar comes in for just the right part and comes out. Yeah, know what I mean? I like songs where you can't picture the guitarist putting his foot on the monitor and jamming. It seems inappropriate for me to do in my mid thirties anyway...

Dave: It was a pretty easy process. It happened a number of ways. For instance; the song I did with Tunde, if I give this song to anybody else he will murder me. There was that and then there was "Hey I wonder what would happen if Yukimi from Little Dragon heard this track?" So it was a combination of all of those things. As far as getting all of the singers I wanted? Yes, except it really would have been awesome to get someone completely far out of the spectrum that I didn't know like Adam Ant or something. I have always had this idea of doing a Cyndi Lauper cover but get Bernadette Peters to sing it. I'm glad that part of me wasn't trusted by anybody.

Billy: There is still time...You mentioned there wasn't going to be a tour for this, are there any plans for live shows?

Dave: I am not ruling anything out, my schedule is kind of off the charts right now. If there is a situation where I can put something together; whether it be for television or for a one off where a bunch of people who were involved are in the same town, which happens, then maybe; or maybe even a surprise birthday party.

Billy: Was any of this material lying around for while, stuff that might have been intended for TVOTR that didn't get fleshed out at the time....

Dave: Not really, I'm working with a ton of people, a bunch of different singers and I kind of feel like the flavor I was putting on Maximum Balloon was something that was really outside of what anyone was asking for. I don't know if you know Chris Coady, he produces and engineers a bunch of stuff, but I was in NY for a week and had a session. Coady and I were like working together in his studio and we were waiting for someone to upload something to us so we could work on it and it was just taking forever so we just started plugging things in and starting dicking around. The beginning of "Tiger" came from literally those 25 minutes and I was like "Oh, shit, I can't give this to anyone else." So I started throwing vocals on it, they sounded HILARIOUS and when I do a comedy record I'll release that as part of the bonus material. Then Aku (Dragons of Zynth) called and said he was in town and asked what I was up to and I said, "Making a song that you have to come and fix!" So he came by the studio and he laid the vocals down. We pretty much started Maximum Balloon on that day. It was out of the spectrum of what I was doing but something I am really interested in. I then started working on more material that fell into that category and started passing it around to the usual suspects.

Billy: I've heard you use pretty interesting drum techniques when recording, were there live drums recorded for Maximum Balloon?

Dave: I did some live drums. I actually got the kid I played with in a punk band as a teenager, turns out he lives 3 miles down the road from me in California, so he plays the live drums because I know I couldn't.

Billy: When did you move out west?

Billy: Do you have a studio there?

Dave: Yeah I have a studio in my house, it's called "Federal Prism." It's far out.

Billy: Would you consider this a "West Coast" record?

Dave: I'd say it's a North Coast record.

Billy: We were talking about TV on the Radio. I know people want to know what's going on with the band. You announced in September that you were going on hiatus for a year. Kyp (Malone) did his Rain Machine thing. You have this coming out and have been busy with this. Are there any recording plans in the near future for the follow-up to Dear Science?

Dave: We have nothing on the calendar. I feel like this band always works intuitively. When we all decide that it's time then it will be time. There will probably be little planning and missed planes involved.

Billy: Something to look forward to. Lastly, speaking of your comedy record, when is Raaaaaaaandy's mix tape coming out?

Dave: Who knows. When it's good and ready. Aziz [Ansari] has been really wrapped up in the MTV movie awards and other filming and writing and I've had my hands full.

Billy: But you are working on something?

thanks Billy and Dave!