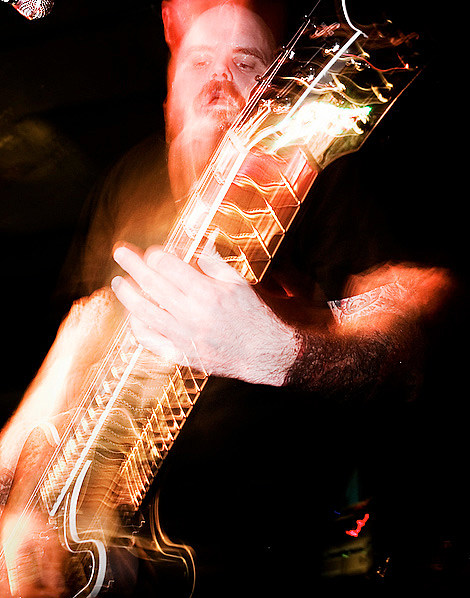 Most punk bands never actually get to release a single seven inch, but here we are in Coliseum's seventh year with their third LP House Without a Curse moments from lift-off. The LP marks the band's first for Temporary Residence Limited, and the J.Robbins produced effort sees the band spreading it's wings a bit while staying true to their punk roots. It's definitely worth a listen, as well as worth the pre-order (the album hits store shelves one June 22).

In addition the the spankin' new LP, the band also has a freshly pressed video for "Blind In One Eye", which makes it's first appearance below. After the video, stick around for some questions that we asked guitarist/vocalist Ryan Patterson about the record, performing live, and punk rock in 2010.

House Without A Curse marks a new direction for you guys. How much of the idea of a directional shift determined who would produce the record? Did you go with J Robbins because of his history in bands that sort of blurred the lines as to what punk is?

I don't know that any musical changes determined who would produce the record, but the vibe of the new tunes certainly contributed to our choice to work with J. on this record. But I pretty much always want to work with J. on everything... I love his music, I love his recordings, I love the guy. He and I have a pretty great connection that I appreciate very much, we seem to have a lot of similar influences and ideas about music, and of course some of that is because of the fact that I am a huge fan of his bands and grew up listening to the music made by him and his contemporaries. When he produced Black Cross' Art Offensive LP back in 2002, he came to Louisville for those sessions and stayed at our house and since we recorded at night and everyone else had day jobs, J. and I pretty much hung out all day and then worked all night. So we got to know each other pretty well and I was able to pick his brain a lot, eventually getting over any hero worship and being able to see him as a peer and friend. I've tried to work with J. on many records since then and each time it didn't work out because of finances or scheduling or various other reasons.

For this record, we'd originally booked dates to record with Kurt Ballou again, partly because our former drummer Chris felt so comfortable working with him and Kurt had the ability to help Chris focus his playing. But after we let Chris go, we weren't going to be ready by the time we had scheduled with Kurt, so he took another project and we just focused on writing. Eventually we decided to work with J. producing and mixing, but doing it all in Louisville at Kevin Ratterman's incredible Funeral Home studio. Then at the last minute J. was unable to come to Louisville because of a family emergency, so we shuffled things around and Kevin recorded the album, then J. mixed it at his Magpie Cage studio in Baltimore.

I've rambled a bit, but to answer your question - it wasn't about a direction but about a sound that we wanted for this record, we recorded entirely analog and wanted everything to be a bit more natural. Even in mastering we left more headroom and didn't do the overly maxed out compressing and limiting thing that has been going on for the last ten years or so, the music actually responds to the volume knob on your stereo and isn't already slammed as loud as it will go.

House With a Curse album art 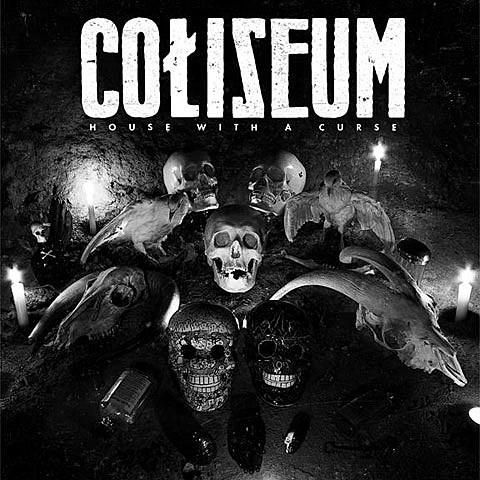 As a veteran of the punk music scene, and just being surrounded by it heavily, do you take current inspiration from punk rock in 2010?

You can call me a veteran when I'm gone, I'm not retired yet - I'm still here slugging it out in the trenches. I absolutely take inspiration from punk every day, from the ideology of what it means to me and how I approach my life. I've always seen it as somehow living in the world, but managing to function outside of its lines and boundaries, at least on a socio-political level. If you mean musically, as in music or ideas presented in 2010, I am inspired by that as well. There's a young scene of great bands in Louisville that are really inspiring - Mountain Asleep, Xerxes, The New Mexico, among others - they're going through the same things our bands did ten or fifteen years ago, just growing up and doing this because you love it, trying to play some shows out of town and get a record out, and they're all really nice people. That's inspiring to me. There are always great bands out there in the world, but my definition of punk as a style of music is pretty wide open so there may be some things that inspire me musically that aren't necessarily punk by the strictest definition. I'm also incredibly picky when it comes to hardcore, there's a lot of great stuff out there, but I'm really particular in terms of what connects with me... I don't know why that is, but I've always been that way. I think it's a style of music that can be ruined very easily.

Ryan with Coliseum at Europa (more by Justina Villanueva) 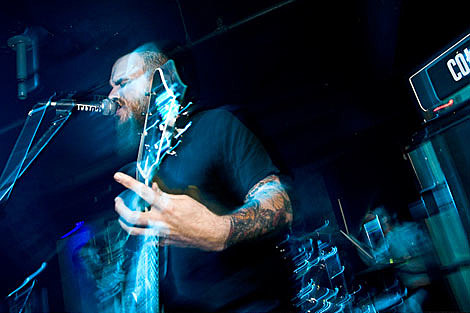 One of my favorite things about Coliseum on the live stage is it seems that you are genuinely humbled by the attention that you get and feel fortunate to be in the position that you are in. That said, who is an example of an underrated artist and how has he/she inspired you?

Man, the list is endless but right around the end of last year I felt pretty intense over the passing of Rowland S. Howard from Crime & The City Solution and The Birthday Party. It was actually the night or morning after we last played Brooklyn on December 30th, I looked online and saw that he had just died at age 50. His obituaries spoke mainly of The Birthday Party and the fact that he penned "Shivers" in his pre-Birthday Party band with Nick Cave, Boys Next Door, with barely any mention of his later work in Crime & The City Solution or These Immortal Souls. Of course Birthday Party were an incredible and influential band and Boys Next Door were great too, but over the past couple of years my brother and I had gotten really into Crime & The City Solution, who are nearly completely forgotten. Their records are out of print, barely anyone seems to know about them, and they've been completely overshadowed in music history by The Bad Seeds. At their best, Crime & The City Solution were transcendent, their records are full of incredibly emotional post-punk that's stark and gothic, with a strange way of funneling early American rock and blues through their Australian punk filter. It's hard to describe their music, but it's been very inspiring for me and my brother Evan, who introduced them to me, and it had a big affect on the music I was writing for House With A Curse. It got me thinking a lot about the futility of lives like ours, spent following our dreams, and about rock mortality... Listening to Howard's final solo album and also finding out that Crime & The City Solution's singer Simon Bonney was having a hard time even finding a record deal... It was really heavy and depressing. I ended up writing the song "Statuary" about Rowland Howard, Vic Chesnutt, and my buddy Matt Arluck from Sweet Cobra who all passed away around the end of last year and were truly incredible people I either knew through music or whose music touched me. The song is about not letting the work and effort and music and love of people like this die with them. I'd also already named our song "Crime And The City" after the band even before Howard's death, in fact we played the song in Brooklyn the night he died. That's probably the most underrated and almost forgotten band / artist that has had the biggest impact on me in a long time. 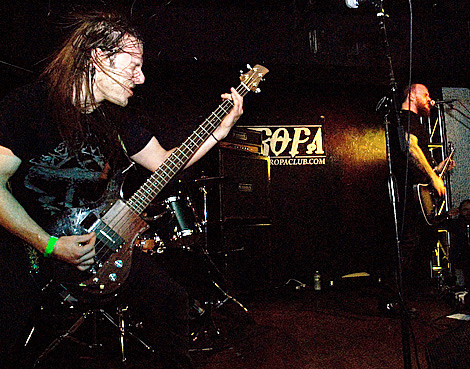 What is your current favorite track from the new LP to perform live and why? What is your favorite song to play live from prior LPs?

It's hard to say with the new album, it's still all so new and exciting for us. I think "Lost In Groningen" might be my favorite song on the record, we haven't played it at any shows yet but we'll be bringing it out for the upcoming tour. There's something about the sound of that song and the way it all comes together that really strikes a unique chord for me. I think we've played "Give Up And Drive" from our first LP at every show we've ever played, so that's probably 600 or more times, and I've never really gotten tired of it. I think we're going to retire it for a couple of tours and maybe bring out something else from the first record that we haven't played in a long time. "Set It Straight" was the song from Goddamage that we've played the most, but "Year Of The Pig" might be my favorite tune from that EP. Favorites from No Salvation varied, but I think "Defeater" might be my favorite to play from that record. Honestly I don't really think of any specific songs as being more or less of a favorite in a show, it's all parts of a whole and the set lists just vary depending on what we're feeling like playing at the moment. 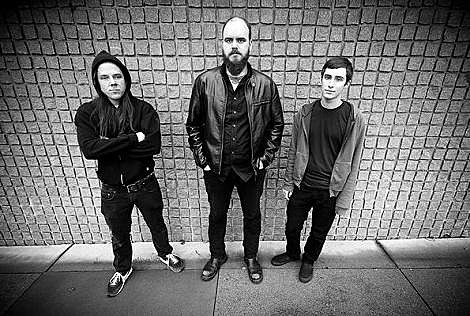 Chris Colohan and Burning Love. How did you arrive at the support for the tour? Via your love for Cursed/friendship thereof?

Well, Chris and I have been friends for a long time, ten years or more. We met when The National Acrobat and The Swarm played together in Buffalo, NY, in 1999 or 2000, I wasn't even in The National Acrobat yet, I was just along hanging out as a roadie. There was a fight outside in the parking lot and Colohan diffused it by getting in the middle of everything and just acting wild and making fun of everyone. We've been friends ever since. Coliseum played our first show in early 2004 opening for Cursed and Breather Resist, we all toured together later, I happened to be in Toronto while Cursed were recording their final record and Chris invited me to do some guest vocals on the record... We have a long and great history together and friends and punk rock lifers. With this tour, we wanted to just have one band with us, not do the big multi-band package thing, and Burning Love were the obvious choice. They're an awesome band and we felt like they are like-minded in their approach without being too similar - it's music that has obvious roots in punk and hardcore but taking it in a really driving, rocking direction without any any specific sub-genre trappings. I'm really looking forward to it.

I'm no authority... Who knows? The kid I always see walking alone down the street in Louisville with a leather jacket and liberty spikes, who seems to be about 14 years old, he seems pretty punk to me. Not because of his outfit, but because he always walks alone. 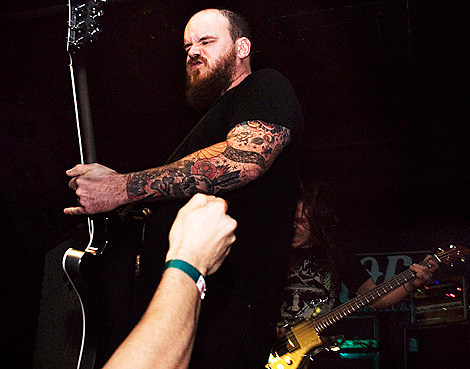 Thanks to Ryan and Coliseum!

Catch Coliseum on tour with Burning Love. The tour hits Europa on July 8th
(tickets are on sale).