"For a guy who's never been on tour before, Dayve Hawk's Memory Tapes does a much better job than many bands well-versed in live performance. It's probably because his music is just so good he'd have to work hard to make it sound bad, and with the addition of live drumming and guitar, it sounded totally fantastic. It took me a while to warm up to Seek Magic, but live his work is clarified, catchy, and precise, more immediate than on the album. Vocals and instruments rose above sound effects. Indeed, a Memory Tapes record is for spaced-out, sunny afternoons; a Memory Tapes show is a place to let go and dance. We always need more of those. Thanks for giving us another one, Dayve." [Tiny Mix Tapes]

Memory Tapes brings his live show to Music Hall of Williamsburg on Saturday night. As mentioned more than a few times, the show is the BrooklynVegan Northside showcase which will also feature performances by Twin Sister, Dom and Zaza. Tickets are still on sale or you can try and use your Northside badge to get in.

Billy Jones, who recently talked to Dave Sitek on the phone and Dom via Gchat, caught up with Dayve Hawk via email. Their conversation can be read below....

Billy: How do you feel about your music reaching a larger audience? When you were a kid did you ever dream of something like this happening?...

Dayve: I'm into it. I'd like to think the music isn't designed for a type of person, that anyone could get into it. I'm probably wrong, but you know, wishful thinking.

Speaking of kids, it was was just Father's Day (Happy Father's Day by the way). How does having a child in your life effect your approach to playing music?

It makes touring kind of depressing because I have to leave her but I think generally I'm able to be more available than If I were working in an office somewhere. I'm not the worlds greatest provider because doing what I do isn't exactly making me wealthy but at the end the day I think we probably have a better relationship because I'm still doing what interested me as a child. Keeps me closer to her level.

Where are you from originally? How long have you lived in New Jersey and what effect does place have on your work?

I'm from New Jersey and have always lived here. I live in the Pine Barrens area of South Jersey so it's a semi-rural kind of environment but in very close proximity to your typical strip-mall NJ thing. I think it contributes to my mish/mash approach to music. There's too much crowded together here to really have a singular vision.

I think joy and melancholy are two of the most difficult human emotions to gracefully convey simultaneously. To me, your song "Bicycle" is an example of that, specifically the chill-inducing solo towards the end. Can you recreate the setting and describe what you were feeling the moment that inspiration came to you?

At the time I recorded the album my daughter and I were sharing the garage as our home/my studio so I would record a lot at night when she was sleeping. I couldn't use an amp or she'd wake up so I just plugged my guitar right into a few pedals and then the mixer and sat there in the dark playing along with headphones on.

With nostalgia being a major theme surrounding your work, how do you yourself deal with the music of your past?

Well I still love most of the things I listened to growing up. I didn't have MTV so I didn't know a lot of the current bands at the time. What I had was a little plastic fisher-price turntable so I would steal records from my neighbors and relatives... just typical classic rock stuff like The Beatles and David Bowie. That was the first music I really loved and I still love it. The worst is the music I made myself growing up. That is some terrible stuff!

You are constantly linked to the "Chillwave" movement that continues to sprout up all over the internet. Is this something you accept or reject?

I think "Chillwave" is a joke that some out of touch journalists took too seriously. I really don't see it as a "movement" by any stretch.

You used to play in the band Hail Social. From my own experience, being in a band can be frustrating when trying to realize your personal vision, but on the other hand it creates a unique tension that brings out things that might have never been possible without that type of relationship. How do you feel about writing music by yourself vs. writing with a band?

Well in Hail Social we never wrote as a band. I wrote everything and just taught the guys their parts. The problem was that the motivation behind the band wasn't my own so it was almost like I was just getting a job done and nothing really came out of any kind of personal vision. I liked those guys and they were really the only people I knew so to a certain extent I think I was trying to preserve the relationships by helping the band to exist. It was a very convoluted and confusing situation that went on for far too long.

You come from one of the last generations that actually bought CD's, played them all the way through, and referenced the songs they like by numbers. Although you gained a lot of internet attention with scattered releases of singles, alternate versions and remixes; Seek Magic feels like an album in the truest sense. Do you think about the entire length of the "disc" when you are writing or is it a song at a time, with album sequencing being an afterthought?

No, Seek Magic was very much an attempt to make a proper album. I didn't really try to have any singles or big moments, I just wanted the record to feel of a piece. I miss albums for sure.

So I am always curious to find out what musicians are listening to, reading and watching when not making their own music. Old or new, what has inspired you in the past year? Did any of that inspiration influence the songs for the new record?

I've been listening to a lot of early Funkadelic records as well as some of the solo Eddie Hazel stuff.... some of that may get into the third album which I've started working on a bit. The next album was more influenced by a lot of the sixties pop stuff I listened to growing up: Girl Groups, Motown, Franki Valli etc.

Are there any contemporary artists that you want to collaborate with? Any that you are listening to lately?

I like the other artists on Acephale and Sincerely Yours.... I'm not super familiar with a lot of newer stuff. I have liked some of the Mount Kimbie/James Blake tracks I've heard. I really like the new Sleep Over track.

Do you have a release date set for the new record yet? Does it have a name? If not yet, is there a working title?

I'm hoping it comes out this Fall but I guess that depends on labels etc. I've got a title but I'm going to think on it a bit longer before I say. We've also got permission to use the work of another great artist for the cover so I'm really excited about that.

Can you tell us who that is?

soon... got to finish it up before I talk too much about it. With the first record I was very excited when Tomory Dodge agreed so it was a challenge to find another artist I was as excited about. 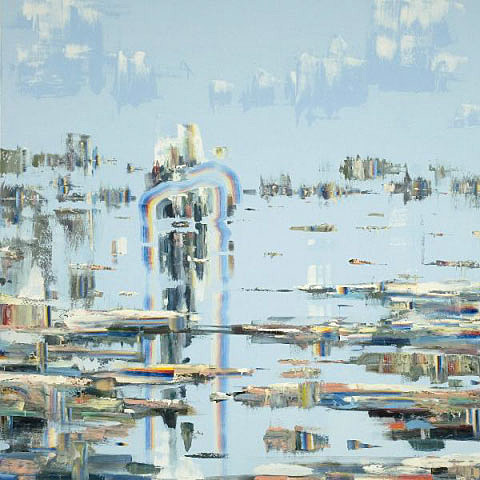 Seek Magic feels and sounds like it was made with what Brian Eno famously described as "the studio as a compositional tool." When translating "the studio" into a live setting it must be a difficult challenge to recreate and capture the essence of those recordings. Is that something that you struggle with? Did the live setting come more into play when working on this new record?

Well it's difficult because I made the record by myself so trying to play it live without the wonders of multi-track recording is basically impossible. I get a lot of "Just put together a band" but people who say that don't appreciate just how small my social circle is. I barely know any other musicians! Luckily one of my best friends is a drummer so my solution for now has been to rework the songs into radically different forms... kind of like a big remixed DJ set and we play along with that. It's not a proper band but It at least allows the live show to exist as its own thing.

Speaking of live setting, you are playing a highly anticipated show at the Music Hall of Williamsburg on June 26th as part of the Northside Music Festival. What does the current live setup show consist of? Will you be playing any new material?

It's myself singing and playing guitar, a live drummer and a computerized keyboardist. I don't really ever perform the versions of the songs from the record so it's new in that sense.