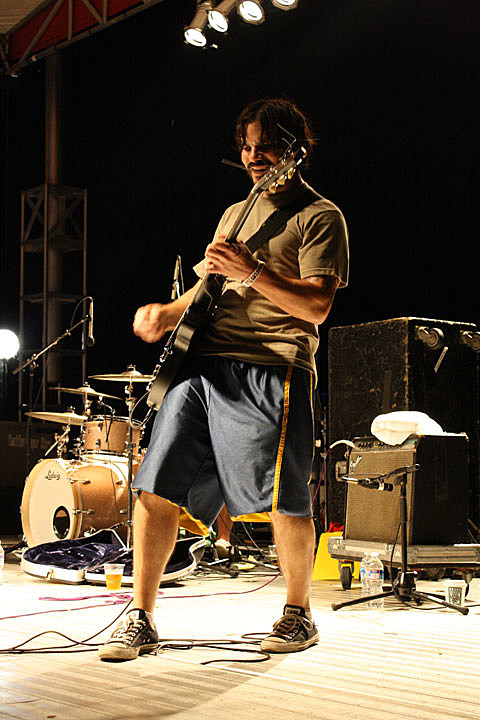 Cap'n Jazz kicked off their short reunion tour (which comes to Brooklyn Sunday) at the Forecastle Festival in Louisville, KY on July 10th. Writer and photographer Patrick Gipson got a chance to speak to guitarist Victor Villareal about an hour before they went on stage. You can read their chat below...

Are you guys sticking around to catch any other acts?

Victor Villareal: Nah, we got to get back (to Chicago). There's two people in the band that have kids at home and it wouldn't be too good anyways, with a baby, in this weather. This is my first time in Louisville, or actually, I've been before with Owls, but first time at Forecastle.

Is the Owls project still active despite the Cap'n Jazz reunion?

Well, Owls broke up awhile back. We made one album and then we ended it; it sort of ran its course I guess. We haven't played or talked to each other for a substantial amount of time; then we recently got back together, just talking, socializing and hanging out. Sam (Zurick) had an idea, like "let's try and play Cap'n Jazz again and see if it Davey wants to do it." After some talking to and collaboration, Davey said o.k. and we decided to do it.

What do you think of Forecastle as a landing point for your reunion?

I think just the way its setup is awesome.

Your band is often typified as "short lived but highly influential;" do you believe bands with short life spans provide an added sense of exclusivity or endearment to listeners and potential fans?

So the question is, "what do I think it is?" I don't really look at it like that. I've thought of it more as a personalized type of experience. When we would play shows (back then), they felt more intimate. Especially because we weren't big, we were always small-time, playing basement shows and VFW Halls; I think we played DetroitFest once as Cap'n Jazz; that was our biggest show. I think the records started to sell once we broke up, so maybe it was the honesty of it, or just the innocence. We really did mess up a lot live, so it was so easy to relate to maybe; you could definitely see how imperfect I was as a guitar player when I was playing.

But now you've had 15 years to perfect it!

(Laughs) Yeah, now you can see so much more. That aspect of it, I'm sure we won't have any problems with reproducing. But, yeah, I'd say maybe it was just the honesty, or that stripped down bare innocence.

Bands like yourself and Sunny Day Real Estate are often tagged as grandfathers of emo and indie rock. How does that make you guys feel to be labeled with such a heavy legacy? Do you feel like it was just a mistake?

I kind of feel like maybe it is, because there were other bands at the time that a lot of people maybe just didn't know about. I think like they deserve just as much recognition if not more. Back then Friction was really huge; Gauge was our hangout band, we'd always play shows with them. They kind of took us under their wing though. I guess the band relationship there (Chicago) was just kind of tight. I took over and Kevin Frank (of Gauge) would always be so focused on everything that was going on when we were playing; almost like our security blanket. If a string broke or something, he'd run up on stage and give you a new guitar; he was always on top of it. When we first started, we were so naïve to everything; they showed us a lot, maybe indirectly most of the time, but we learned a lot from them just by watching.

What do you feel you know now, what you didn't know then?

Maybe just to prepare more, for shows and be one step ahead of the game as far as performance goes. Like changing strings, making sure I had backup strings; those are the things that I never used to think about before I met Kevin Frank.

You guys did a small, impromptu performance in Chicago in January. How did that come to fruition, especially after so long?

Tim did this Joan of Arc variety show and he had a bunch of other bands. It was basically one big show with a bunch of sets, like maybe ten different sets, but the connection there was that each band was somehow affiliated with Joan of Arc, or was in the band at one point or another. We played in the middle of the variety show; played four songs. There was a special feel to it; it gave me, I want to say reminiscence, it brought me back.

Why did Forecastle strike you guys as the proper time and place for the official reunion show?

Well, they approached us and it was just the way things fell. There's a bunch of the shows that we agreed to do, but this is the first one. It just seems to me like maybe I would have personally put this later on down the road and it just so happens it came to be this way. But, that's the way we've always been as a band, whatever happens happens and we deal with it as it comes.

What do you think of the music scene now when compared to how you guys left it as Cap'n Jazz? Is it better or worse?

Without sounding too vague I'd just say it's evolved; it seems like its constantly evolving. It started way back...honestly; I can't even answer that question. I've been so detached from the music scene for so long, I really have. There was like a good, long five years when I just forced myself not to watch T.V. and I'd listen to music and go watch shows. I kind of detuned myself from the whole thing just to get to know myself better. So I couldn't even give you answer worth recording.

It's less than an hour until your show; what do you feel like right now?

I feel really unusually calm; like I've never felt this calm before. There's a good balance right now, going on with me. Hopefully things will stay that way.