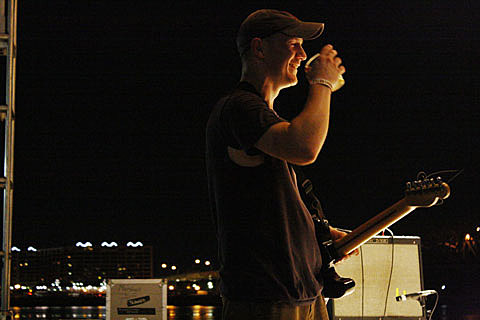 "Davey von Bohlen (born August 11, 1975) is an American musician and songwriter, best known for his roles as guitarist and vocalist in Cap'n Jazz, The Promise Ring, Vermont, and currently, Maritime. He is well known for his charismatic stage presence." [Wikipedia]

Cap'n Jazz kicked off their short reunion tour (which comes to Brooklyn Sunday) at the Forecastle Festival in Louisville, KY on July 10th. Writer and photographer Patrick Gipson got a chance to speak to guitarist Davey von Bohlen about 40 minutes before they went on stage (right after he talked to Victor). You can read their chat below...

Why did you guys choose Forecastle for this performance?

Davey von Bohlen: I think Forecastle chose us; I'm not even sure how that all worked getting us. It works for us; for us it was all about Chicago, getting east and getting west, just trying to cover the country. This (Louisville) kind of seems like the center of a lot of the places we have to go.

Following the impromptu performance in January, where did you guys go from there that led you to deciding as a group to do this?

Well, its fifteen years next week, since our last show. I think maybe Tim was like, 'Hilarious, fifteen years. God, maybe it'd be fun to play.' I think we like reached that point where there's no emotional attachment to it anymore, where it's like, we don't feel like we're going to be defined by it or any sort of weirdness that might come with playing the songs again. We kind of committed to two or three practices and then at the end of the three practices we'll play at some show, a couple songs, and we'll be decide yes or no. It was fun, really fun to do; so that was our trial. So we're doing a couple, a handful of shows this summer and then that's it. This is way more than I think any of us thought it would be.

Do you believe artists who come, then go away for awhile adds any sort of exclusiveness to the material itself? Perhaps gives the fans more to wish for?

For this band, no; the years I don't think matter. It's like, after five years it's just like ehhhh... I think what's good is that the band broke up like five days after our only record came out. Nobody's ever seen us; people who are like our best friends never saw us. It's good that way; it kind of allows people who would have never had the chance, in that spot where they could see our band, maybe not as it was, but as close as we can get it.

Your band is often tagged with the short-lived, but highly influential grouping. Your band is sometimes even referred to as godfathers of indie rock and emo. What is it like carrying that title; is it unwanted or a mistake?

Well when people give you a title it's all a mistake. Call it a happy accident I guess; it's flattering. Any sort of attention you're given is obviously flattering, but I think the whole 'godfather' thing is like way off, that's a generational thing. When I was 18, there was godfathers of emo and it wasn't me. It was like Soulside and Rites of Spring; 'oh my god these guys are so awesome.' I think people have forgotten, like the layers peel off. Our layer will peel off and in five years you'll be asking Jim Adkins like, 'Jimmy Eat World started emo.' You know what I mean? I think it's more just like time; time passes and for people it becomes less and less memorable as they are like ushered in; I don't know if that's true, I could be totally off. To me, its guys like Revolution Summer, in 1985, where emo kicked off. Way before it turned into such a different thing.

Does it seem like when the mainstream picked it up the genre officially started?

Maybe. It depends on when you consider it. When people talk to me about it, I assume they're talking about my career, so I sort of consider that a timeline of like when I've been playing. I don't know, that's me putting a timeline on it; everyone has their little timeline of what they consider when it began. But I remember when I was like 12 or 13, being like, 'I can't believe the summer of 1985 happened in D.C. and I was 10.' So bummed, I missed it and all those bands broke up. That's when it started for me. Someone who's 45 will be like, 'this idiot doesn't know what he's talking about,' those bands were totally taking off from so-and-so. I mean, taking all that in is great; to think that we were in some sort of lineage of bands that influenced anyone in a positive way, or in any way, means that you were doing something interesting enough to love it or hate it, which is all we were trying to do.

How do you feel now, being less than 40 minutes away from playing your first scheduled show in fifteen years?

How old were you guys when you broke up?

I was eighteen when the band broke up. Mike was fifteen or sixteen; yeah we were babies back then, we had no idea. Now we've done so many bands, that coming back to it, we're not the teenagers we were, we just aren't, you just learn. It's different; Victor especially, I haven't seen him, maybe once or twice since 1995. No animosity, but I don't live in Chicago. When I was in Chicago, with bands, he wasn't there because he was doing other stuff. Those guys are all so talented, I'm just trying to keep up; that's totally the vibe tonight. They're fifteen years more talented. It's funny, going back and learning the songs I was like, 'God what was I doing then? What was seventeen-year-old me thinking?' I wasn't a very good guitar player; I'm not a very skilled guitar player, but I've become really good at being a rhythm guitar player. This is a really easy job.

Will anything else come out of this tour from Cap'n Jazz?

It's just this. We're not going to do anything; nothing is going to bloom out of this. It's just not possible. There's so many bands between the members and family, Mike and I have kids. I know that I couldn't do it.

Do you feel tonight is more of a treat for the fans or for you guys?

I don't know, we'll see. I haven't seen how they react. I mean it's fun for us, so hopefully it will be for everyone too. It seems like it's not just a normal reunion, because we broke up so quick that it was like, 'wow we never really showed the band to anyone.' Maybe we're going to find out that that was for the better. You can never predict how these things are going to end.

Compare those answers with with what Victor had to say.