DOWNLOAD: Unearthly Trance - "The Horsemen Arrive In The Night" (MP3) 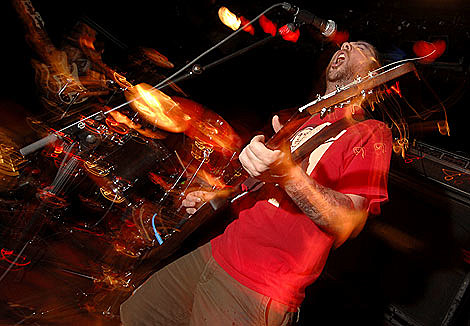 Unearthly Trance may be celebrating their new LP V TODAY (9/28) via Relapse Records (same day/label as Black Anvil's Triumvirate), but it definitely ain't all rays of sunshine. The NYC trio bulldoze and pillage their way through twelve new tracks, all while seething with a fury that could only come from NYC. Dig on one of those tracks, "The Horsemen Arrive In The Night".

With V finally in the open, the record will be celebrated with Swedish doom band SUMA (profiled here) at Union Pool tomorrow (9/29) with Pharoah (profiled here) as part of a larger tour for UT/SUMA. The band will hit the road for additional dates in the coming months.

We sat down with Ryan Lipynsky to discuss the band and the new record, as well as his work with The Howling Wind & Pollution, and life in the NYC heavy music scene. The results of that conversation are below... 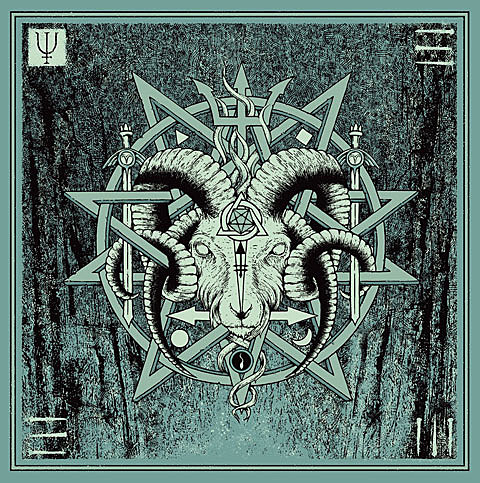 BBG: V is your fifth record, and followup to Electrocution. What were your goals for V in reference to previous works?

Ryan Lipynsky: The goals were to switch gears from the where we were on The Trident and Electrocution and focus more on the elements of what we consider the core of our sound. The slow dark plodding funeral march mixed with the obscure occult esoteric realm. I didn't really want too many long songs and I certainly made a rule of no fast songs for this record. We all felt this one needed to be bleaker, or at the very least more in synch with what are live sets were like. Perhaps in more recent times on our first two Relapse records we were exploring lots of different tempos and approaches but at the end of the day, UT is best when we are laying down the monstrous bulldozing riffs with scathing vocals. We built on the core and developed a bit of a musical concept record. For the first time we wrote the album in sequence and every song HAD to be on IT. We wrote a record as opposed to a collection of songs. On V we also wanted to be way more involved in the recording process and have control on the aesthetics of our artwork/layout. Both of those goals were achieved and the whole experience of the process exceeded my expectations. We really had our heads in making this record. Oh and the most important part of all was that we wanted this album to be recording in New York. The past 3 were done in Chicago and we desperately wanted to be at home with all of our gear and resources at our finger times this time around.

With the record about to be released, what are your plans for hitting the road, outside of the SUMA tour? Will copies of the collaborative split be available for sale on tour?

The collaboration 12" will be with us on our forthcoming excursion. Other plans besides this tour, we have are to do a west coast thing with Aldebaran from Portland early next year. Oh yeah and maybe some European touring! It is all up in the air at the moment but things are looking very positive for UT in '11! 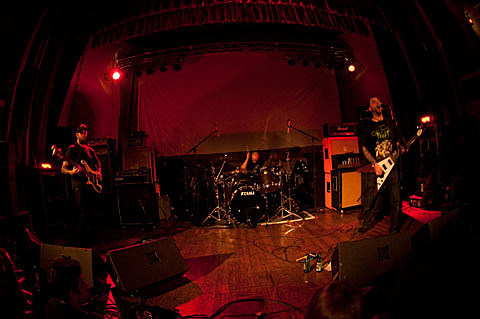 What are your personal (and specific) thoughts on Sanford Parker, and why (from your experience) is he so sought after?

Good question. We met Sanford on tour in Chicago many years ago and he got it in our heads that he wanted to record us after seeing us play live. When it came to think about recording our second album "In The Red" we basically decided to give him a go since he approached us and we took that it as a sign of good things to come. Basically he understands this kind of music, he is in bands himself and has really dedicated himself to being a proper engineer over many years. He really knows his shit. Chicago has a very high standard when it comes to quality recordings, and I believe Sanford is just continuing on in that tradition. Yes everyone can record something on their own, but there is still something magical about going into a studio with a guy like Sanford at the helm. I think word of mouth over the years and his dedication to his craft got him where he is now! Proud of ole goat!

As someone who came up through the NYC hardcore scene and are now a veteran of the metal scene, how have you seen NYC heavy music and the bands surrounding (d)evolve?

I'm slightly bitter but honestly I think its awesome play a show with Sleep in 2010 and see all these people coming out to see them! I would never believed you if you told me that before UT started in 2000. UT has been ahead of the game so to speak in our area for a while but now, but we are not such a black sheep band like we used to be. The first few years of our band most people hated us. "Too loud", "too slow" and basically painful for normal minded long islanders, which is where we all grew up. I can totally see the pro and cons of both metal and hc scenes and honestly think that the best experiences lie somewhere in between the defined genre rigid shows. It has been awesome to see the growth of the Brooklyn underground scene. Its like night and day between now and say 2001. Things come in waves and I always hope for something new and amazing come along and blow us all away and inspire me to become a better player/songwriter. I still think it is important to try to keep an open mind even if jaded feelings surface in my mind. haha 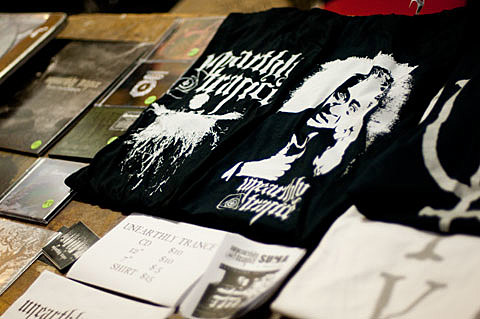 I love the UT shirt with Rodney Dangerfield on it. That said, who is one of your favorite NYC bands that you feel got "no respect"?

Ha thanks! That is a perfect example our type of humor within the band. Glad people get the joke and have responded well to it! NYC bands that get no respect? I would say Gospel but I think they are not active again?!? Those guys were really onto something with that album they did on Level Plane. Gospel is a band whose members goes back to the old LIHC scene. Jay and I have both known Dooling forever! Another lifer...OH Ive heard great things about the new Negative Plane album in terms of metal...

Last year you released a ton of splits with many notables, which included covers of Winter and Roky Erickson among others. So far this year you have a split with The Endless Blockade (RIP) and Wooden Wand. What are the plans for release of future splits and what are some of the details on why you chose to cover Charles Manson on the split 7" with Wooden Wand?

The split 12" with Suma just got released. Its a collaboration between both bands. Each band has the other bands singer on each others track. The next split to come out is a super limited 7" of Charles Manson covers. The idea of this came from Jay and Darren. I think it was more for the fact that Darren Verni [UT Drummer] has a great ability to sing and he wanted to try to sing a Charlie tune. I think at first they wanted to do "Look At Your Game Girl" but I suggested "People Say I'm No Good" because it had a more minor sounding gloomy feel. The song is totally different from anything else we have done. Its an acoustic song with clean singing. Chrome Peeler was interested and i think Jay got in contact with Wooden Wand and then suddenly we had another split in the works! For the future, the only only split we plan to do is one with Fleshpress from Finland on Throne Records in '11.

So on that split with Volition where each of you covered a song by Winter.... How did that come about and have you come across the Winter guys since then?

That happened out of Volition graciously soliciting us with the idea and we instantly said yes. Ever since the beginning of UT we messed around with our Winter cover version of "Servants of the Warsmen". Felt great to finally work it out and record a version of it! We played a show out in LI, which was a benefit show in honor for our friend Lee who passed away and it just so happened that John from Winter came to the show. We have a mutual friend in our buddy Ron and I had previously chatted with him through an email and sent him copies of the split. So he came out and was a really nice guy and told me that he really dug our cover. Made my week! Maybe one day we can convince him to join us live in the future! 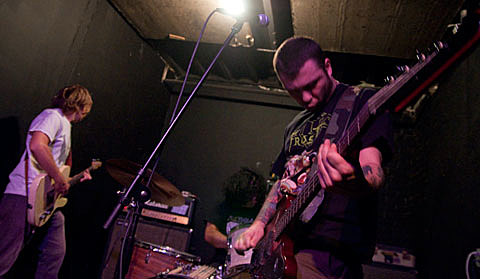 Outside of UT, you have a few other different ventures. Pollution recently embarked on a tour with White Lung and have released a few LPs in the past few years. Whats next for the band?

Pollution is currently writing and working on some awesome new songs. We have been laying low to focus on this new material. Playing a few local shows in November and I would imagine we will record the new album some time in the winter. This time instead of another self recording in our practice space, we plan on going to a real studio so we can capture the proper drum sonics of the maniac known as Elsner Nino. We wanna step it up and basically present ourselves exactly as we are. It will most likely be another DIY release through C6Recordings. But right now nothing is set in stone.

Tim Parasitic is on the west coast and you are on the east. Any plans to take The Howling Wind to the live stage?

Shit, I don't know to be honest. I only want to play live if there is a demand. Not sure if we are at that level yet. We spoke of possibly pulling off a few THW songs on an UT Aldebaran tour, but even that is just an idea. One day...

What are some personal goals that UT would like to accomplish in the coming years?

The only goal is to simply continue on making music. We have no lofty aspirations, just to continue keep playing as long as we all feel it in our souls. Whenever it stops being fun, it will cease. This is our personal outlet first and foremost. We have been kicking along for 10 years and I guess another 10 would be astounding! 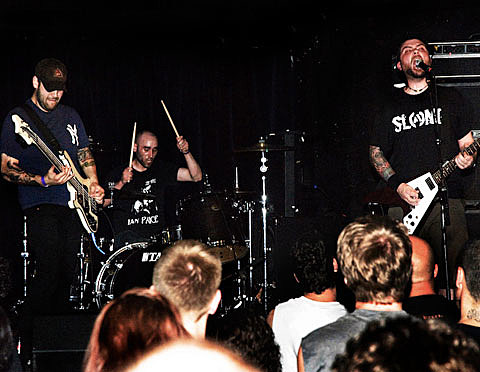 Special thanks to Ryan and all of UT.