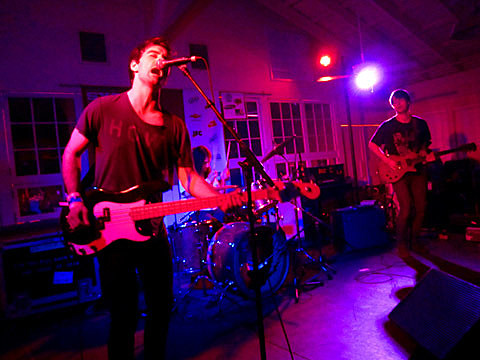 Weekend have stayed pretty busy since the release of their acclaimed debut, Sports, on Slumberland last fall. The San Francisco trio take myriad post punk influences, and amp them into a unique -- and vociferous -- sonic assault. The band are about to hit the road with post-punk legends Wire, a tour which rolls into town next Tuesday (4/5) at Music Hall of Williamsburg. (They also play an early headlining show at Mercury Lounge on Wednesday [4/6] with Toronto's Little Girls.)

The band also just wrapped up ten shows at SXSW, which is where this interview took place, right after their blistering set at our Saturday day party. In an alley beside club Barbarella, I pulled the band aside for a few minutes of off-the-cuff talk about hearing protection, their upcoming tour with Wire , and what's next for the band...

BV: I goes without saying Weekend are really loud. It didn't look like you guys were wearing earplugs when you were playing.

Shaun [Durkan, bass/vocals]: When we rehearse we do.
Kevin [Johnson, guitar]: My policy is to wear earplugs all the time...except for actual shows. So this week it's been pretty hard
Shaun: It pisses his girlfriend off a lot.
Abe [Pedroza, drums]: I want to get the fitted musicians earplugs, I feel like I'm in the early stage of tinnitus.
Kevin: If we could afford those, we'd get them. But with any other earplugs, it's just hard to play. It cuts so much of the frequencies out. I also want to experience things as the crowd does, but when you're playing nine shows in a week, it's a little bit ridiculous.

BV: So when SXSW wraps up, you're going out on tour with Wire.

Shaun: Right. We actually just finished up a month-long tour with them in Europe.

BV: Oh right. How did that go? I assume you guys are fans.

Kevin: Huge fans. It's been great. Their fanbase is so hardcore, they aren't really the kind who go to see the opening band. But once they got there and saw us, the fans were pretty receptive to us. We sold a shit-ton of records and got some cool exposure. And we played cities we'd never been to.

Shaun: Wire fans are not like your average punk or post-punk fans. They're really open-minded people.

BV: They kind of have to be. Wire don't really rest on their history.

Shaun: No, they're trying to escape that.
Kevin: At the merch booth, they sell tons of their first three albums...but they don't play any of it live.
Abe: Well, if they do a second encore you get "Pink Flag."
Shaun: I can totally respect that, the idea of just, keep pushing further and further.
Abe: Though at the same time, the reason they can still tour is because of those first three records.
Shaun: I also just wanted to hear "12XU."

Kevin: We joked about covering "12XU" for our opening set. It's like when Wire reformed in the '80s, for that first tour they hired a band, The Ex-Lion Tamers, to play all their old hits so they wouldn't have to.

[At this point a couple random girls come up and ask Shaun if he would take a picture of them. Of course he says yes.]

BV: I bet this happens a lot.

Kevin: Oh yeah All the time. But yeah Wire, when people think of them, they think of those first three albums, but they've been making great records since those.

BV: The Ideal Copy and A Bell is a Cup are great records.

Kevin: Yeah, and when they were Wir...all that stuff. And they play stuff from that '80/'90s period too. It's maybe not as nostalgic for a lot of people because of that, but I respect them for it.

BV: Speaking of cover versions...did I hear you say the other night that one of the songs was a cover? [Whole band laughs]

Shaun: Uh, it was a joke...I said it was a Third Eye Blind cover.

BV: I missed that part.

Kevin: We used to do "Sue is Fine" by My Bloody Valentine but we only did that because we played a MBV tribute night at Part Time Punks. But in general we don't really mess with covers.

Shaun: Though I'd like to do them. We had this big plan to do "Halcyon and On and On" by Orbital...it may happen.

[editor's note: please do that!]

BV: Besides this tour with Wire, what's next for Weekend?