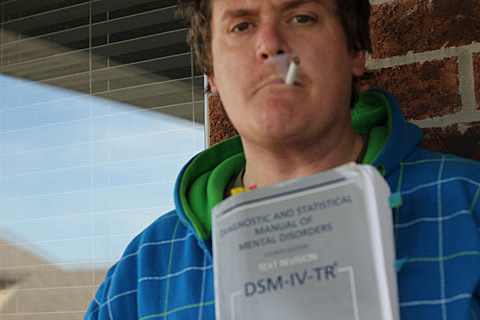 David Hall might need therapy. The film & music video director's eerie cine-scapes have provided the backdrop for some metal underground favorites like Today Is The Day, Fuck The Facts, and Jucifer. Hall and his Handshake Inc production company are also responsible for Maryland Deathfest The Movie, the 2010 feature-length documentary that follows the mayhem that is the annual festival. The first film was released last year on DVD and now with volume two currently up for preorder, I sat down with Hall to discuss his experiences at MDF, his inspiration, and his wishlist of miscreant collaborators.

Read the full interview, and an exclusive clip of From Ashes Rise from MDF 2010, as featured in Maryland Deathfest The Movie II, below... 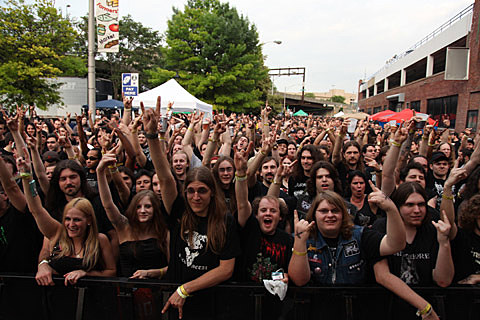 With such a wide selection of bands to work with at MDF, how is a band that you shoot chosen or not chosen?

It all comes down to cash and drugs. If a band can slip me a few benjamins and some Xanax we're all good.

Really though, we try and film every band. I think it's safe to say if a band is playing MDF they are worth filming. Usually around January, Ryan, Evan (MDF promoters) and I make up a list of bands we for sure want to film, then I try and get permission in advance. MDF also usually features bands that have reunited, or are playing in the USA for the first time or haven't played in a long time, so those kind of historical events must be captured. Also, if a band asks to not be filmed then we respect that and chill on that shit.

From Ashes Rise LIVE from MDF The Movie II

What was your favorite performance from MDF last year and why?

It was amazing seeing Jucifer at MDF because they were a bit of a 'wild card' going in, i.e., they're not a traditional 'metal' band and I think some people were a bit unsure about them playing...but their set was epic and loud as fuck and I think they won some new fans over.

What about heavy music in particular intrigues you? Do you see yourself doing video for bands where guitar isnt the primary focus?

Dude, I am dying to do a rap, hip-hop or any sort of electronic music video. If I could do a video for R Kelly or Die Antwoord or Dizzee Rascal that would be amazing.

I think 'heavy' music is like rap...there's a lot of garbage and you have to wade through it to get to the amazing stuff. Heavy and extreme music (though I think this is true of any music worth listening to) is very emotional and real and it kicks the shit out of the formulaic and tired bullshit that passes as 'popular' - there's just something about extreme stuff that feels right and true to me.

Visually, what are some of the music videos that inspired you? Any specific music video directors?

Godley and Crème's "Cry" is one of my favorite videos ever, Metallica's 'One' had a huge impact one me even though I could care less about the band, almost any video by Michel Gondry is worth watching, Jay Z's '99 problems' is kick-fucking-ass, and this dude Chad Rullman who's made videos for Mastodon and Neurosis and Zoroaster makes great stuff too.

You've worked with names like Today is The Day on live visuals to accompany their nightmarish sound. How much of the visuals were created with the input of TITD mastermind Steve Austin? Were you given carte blanche to interpret the music as you saw fit?

I've just made my third film for Steve and Today is the Day, for their new album, and one of the reasons I love working with Steve is he gives me total creative freedom. I purposefully don't tell him any of my ideas or show him scripts or anything because I like to try and shock and impress him by just delivering a finished film and seeing what he thinks. Artistically I think Steve and I share a fondness for going to uncomfortable places, so Steve's music indirectly inspires me to create without any limitations. For the 'Pain is a Warning' film, Steve said, "don't hold back anything...push boundaries and limits as much as possible." As an artist, that's the nicest thing anyone could ever say to you.

TODAY IS THE DAY: IED

You've created films to accompany previously released work by TITD & Fuck The Facts. Outside of the work you've done with MDF, are there any plans to do anything similar with other artists/LPs? Who is a dream list of artists and/or LPs that you would like to give your dystopian treatment?

I'm working on a film for Jucifer right now that gives their work a similar treatment to what I've done with FTF and Today is the Day...I've filmed two of their concerts here in London, Ontario, where I live, and filmed a bunch of fictional/dramatic stuff too and aim to deliver a 6-hour freak-out film that will crush your soul and destroy your genitals.

Agoraphobic Nosebleed are a band I really want to do a full length film for, same with Bastard Noise. I am also DYING to make a film for Electric Wizard and Portishead.

In terms of LPs I'd like to turn into films there are two albums that are my Holy Grails, so to speak: Roger Waters' 'Pros and Cons of Hitchhiking,' and Fantomas' first record.

TODAY IS THE DAY: The Sound of Your Smashed Head

Who are some of your favorite feature length directors?