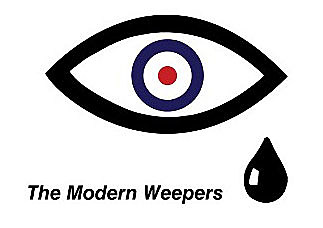 This is sure to add to the conspiracy theory that we somehow knew who the Modern Weepers were before the now infamous post asking that very question went live, but I promise you we did not. While there has been no official confirmation of their identities, most seem to think it's Fred Armisen and Mike Myers (and a third unkown member). We'll know for sure tonight when the band plays Mercury Lounge.

Since our postings, Modern Weepers management contacted us, asking if we'd like to interview Gary Dibble, the main Weeper, via email. Of course we said yes. Basing questions solely on the bio given on Mercury Lounge's website -- and a few assumptions -- we submitted the following 11 questions, and here are Dibble's responses. The sense of humor does seem familiar...

BrooklynVegan: Your bio says you're "Well travelled and well known in [your] native England" yet we've never heard of you. Why is that? Do you have records out?

---
Your bio is also short. What can you tell us about Modern Weepers? Where did you and "Hugh" meet? And why is his name in quotes?

And "Hugh" is his witness relocation name. His real name is [redacted], and he lives at [redacted] under the railway arches. His mobile number is [redacted]. He was previously married to Patsy Kensit, who he once called a [redacted].

How would you describe Modern Weeper's sound?

You're from Manchester. Ever have any run-ins with Morrissey? Is it true what they say about him?

I've had quite a few run-ins with Morrissey, actually. He's quite cantankerous in that Manchester way. The feud between Morrissey and I started out as a nodding acquaintance, turned into a snubbing, that then transformed into a silent wanking hand gesture, which progressed into a shoving match and climaxed with Liam, Noel and I pushing Morrissey over and pissing on him, singing, "House on fire. House on fire. Put it out. Put it out." I think that was the origin for his song "I Knew I Was Next." He's been quite cross with us since.

And yes it's true. He does have a vestigial tail. More of a nub, really. The spine just goes on a little longer than it should.

This will be your first American performance. (Correct?) What can we expect from a Modern Weepers show?

Well, there was some concern about you Americans not being able to understand us. But I'm not bothered because a fortnight ago, I rang my barrister, who was stuck in a lift with only a packet of crisps after some barmpot scally in a hoodie who was on the pop cobbed a scowler after a few scoops, and he was forced to do his dirts al fresco, if you know what I mean. So you can see I'm not really worried.

Can you offer up an especially dour example of your "classic Mope Rock" lyrics?

I'd have to look at our song "Cry Pail:"

Not sure if it comes across, but this song is about a receptacle for tears.

Do you ever laugh? If so, what makes you laugh?

Of course. I love to laugh. There's this English show right now called Hooseywat, starring Paul Feldman. You know him, he was on Trapeze Patrol with Tondalaya Wilton. That was before her accident, poor cow. Do you have Hooseywat in America? It's brilliant. "Hugh" and I watch it on the coach of a Sunday.

You spent time in Wormwood Scrubs. Which wing were you in? How long were you incarcerated? Did you write a lot of songs there? If so which ones?

I was in what they call the "Female Piggy," or the SOW. The Sad Offenders Wing. I was in for 3 months and a fortnight. I wrote the A-Side of Summer's Brewing there, which eventually became Makeshift Vagina. In Indonesia, it's called Album 2.

City or United? Have you ever had Man Chest Hair?

I'm not a footy fan, meself. Until two weeks ago, I thought Man United was a peace movement.

I have man chest hair around me nipples. I man-scape.

Will England ever win Eurovision again?

Look, England can only win Eurovision if we come up with a name that's a palindrome, like ABBA. "Hugh" got to the finals with "Miami Imam." Not quite a palindrome. Almost an anagram.

I still think Makeshift Vagina has a crack.

What's next for Modern Weepers?

Well, right now I'm playing with me "Album 2" if you receive my meaning. We take it one tour at a time. The Modern Weepers will never stop. Our motto is, "Don't ever give up. Just keep on crying."